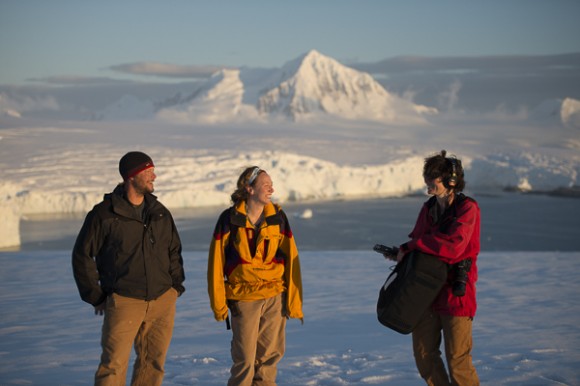 There is an urgent need to improve science communication to the general public. Too often research narratives fail to illustrate the excitement, challenges and passion required to explore the planet. As such, the Rutgers University Film Bureau is partnering with the Rutgers Institute for Marine and Coast Sciences to create a multi-tiered documentary film project called Antarctic Quest: Racing to Understand a Changing Planet  featuring the transformative science of the National Science Foundation’s Long Term Ecological Research (LTER) Project at Palmer in the West Antarctic Peninsula.  The LTER is headed by marine scientist Oscar Schofield and he is accompanied by Rutgers film bureau director Dena Seidel and cinematographer Chris Linder.  The research and film teams arrived in Palmer station on January 4, 2013 and their adventures are being documented in the Antarctic Quest Blog.  Visit the blog to find out more about the team’s work in Antarctic.  Additional support for this project comes from the School of Environmental and Biological Sciences at Rutgers.