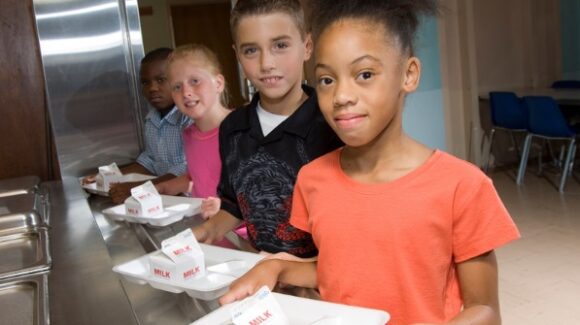 COVID-19 pandemic-related funding for free school breakfasts and lunches expires at the end of the summer. Our authors say this is a step in the wrong direction because healthy meals contribute to a child’s ability to learn, their sense of well-being and competence and their overall sense of security and self.

By Peggy Policastro and Erin Comollo

Earlier this month, we got inspired by what felt like exciting new energy from the federal government in fighting hunger. We were at a listening session held at Rutgers by Sen. Cory Booker in advance of a historic White House conference on hunger planned for this fall.

“Food is at the intersection of our well-being,” Sen. Booker said, and you could feel the level of passion and expertise in the room dedicated to improving access to healthy food.

But we are afraid the U.S. government may be missing an opportunity to pursue one of the most efficient and effective hunger prevention programs available: permanent federal funding for universal free breakfast and lunch in public schools.

For the first time in more than two years, thousands of children are about to lose access to free meals as COVID-19 pandemic-related funding for universal free school meals expires at the end of the summer. This is a step in the wrong direction.

We both work at the New Jersey Healthy Kids Initiative, a Rutgers University program funded by the Robert Wood Johnson Foundation that is dedicated to improving the health of the state’s children. We design and implement programs in food and physical literacy in schools throughout the state, and we have seen firsthand the difference in behavior and academics when a child has – or hasn’t – had breakfast.

The research is clear: Healthy meals contribute to a child’s ability to learn, their sense of well-being and competence and their overall sense of security and self. A study of data from the Third National Health and Nutrition Examination Survey, a 6-year survey of nearly 40,000 children by the federal government, concluded that “food-insufficient children had significantly lower arithmetic scores and were more likely to have repeated a grade, have seen a psychologist and have had difficulty getting along with other children.”

According to the study, “Negative academic and psychosocial outcomes are associated with family-level food insufficiency and provide support for public health efforts to increase the food security of American families.”

Improvements in school lunch nutrition in the past several years have been driven by evidence that a balanced, nutritious meal is critical for whole child wellness. As much as they get a bad rap, school lunches are the most nutritious meal of the day for some children and are critical for exposing children to healthy eating habits. One 2017 study of children participating in free-lunch programs in North Carolina found “33 percent tasted at least one [fruit or vegetable] they had never tried before, with 83 percent of those children liking at least one of the new items they tried.”

Second, it’s important to know the pre-pandemic rules that are about to go back into effect will cause many children to miss meals. Under these returning rules, parents are required to fill out onerous and sometimes confusing paperwork to qualify for free- or reduced-price school meals. One study that interviewed more than 300 school lunch administrators found “paperwork to be a primary barrier” in parents’ participation in free-lunch programs.

Many other families fall into a gray area, making too much money to qualify for assistance but not enough to cover the bills. The temporary universal free meals program and other aid targeting families reduced hunger in families with children by 40% in 2021. Also, we have seen how making families raise their hands and apply for free meals stigmatizes the children who use the program. Offering universal free school meals would change that.

Now we risk losing these gains, as many families still struggle with employment. Add to this the recent sharp rise in food prices and child nutrition experts are worried about a “perfect storm” of kids going hungry.

Finally, it’s become clear that the federal government, and only the federal government, can do this. Craig Couglin, speaker of the New Jersey General Assembly, has worked to address child hunger repeatedly, including a new law this year that will allow an additional 26,000 students in the state to access free or reduced-cost lunch. But that program cost New Jersey taxpayers $19.2 million and there’s only so much the state can do.

The federal government has now shown, conclusively, it has the ability to pay for and implement universal free school meals. The nationwide cost would be half of what it costs the U.S. Navy for just one submarine program. But efforts in Congress to make the program permanent have stalled.

We deeply appreciated Sen. Booker’s investment in solving our nation’s hunger problems. We hope he and other federal officials will take up the cause of universal free school meals. This kind of investment in our children will pay us back for generations to come.

Dr. Erin Comollo is the program development administrator for the New Jersey Healthy Kids Initiative (NJHKI) in the Institute for Food, Nutrition and Health at Rutgers University.

This op-ed originally appeared in The Star Ledger.