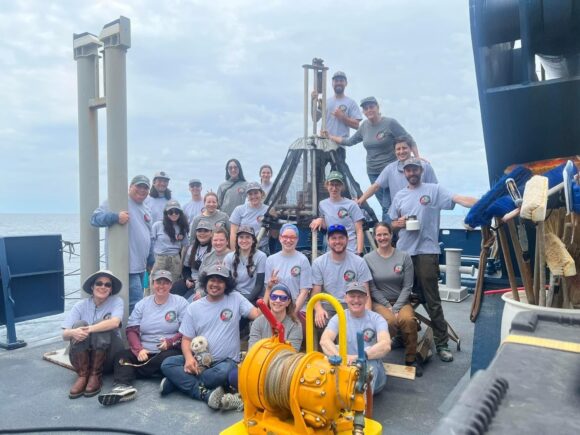 The PUFINS science and educator team and R/V Atlantis coring crew pose on the back of the deck of the ship. Photo: Erin Sharpe. 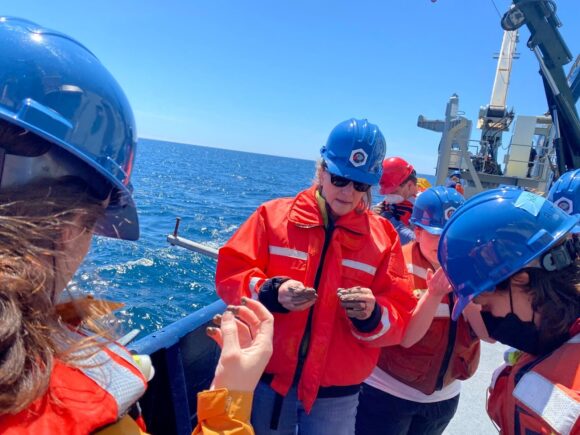 In June 2022, a team of scientists and educators embarked on a 14-day expedition in the North Atlantic Ocean onboard the R/V Atlantis in search of deep-sea mud. Led by chief scientist and professor, Liz Sikes, Department of Marine and Coastal Sciences, and primary investigator and University of Washington professor, Julian Sachs, the team sailed off the coast of Nova Scotia and New Jersey in search of 10,000+ year old sediments. The hope is that these sediments will help solve a climate and oceanographic puzzle called the “Holocene Conundrum.” This is an observed temperature anomaly in the North Atlantic Ocean that displays a cooling trend during a time when most records indicate the climate was warming.

This team, nicknamed PUFINS—“Paleo Unsaturated-alkenone Fluxes In Northwest-Sediments”—also included five educators as part of a collaboration with the Rutgers University Geology Museum to bring the science directly to the public. Geology Museum Director and professor, Lauren Neitzke Adamo, was joined by four K-12 teachers, who assisted with the documentation of the expedition through blogs, YouTube Videos and Live-Stream events from the middle of the Atlantic Ocean. Teachers Erin Sharpe, Ale Martinez, David Walker and Stacey Sebert all temporarily swapped their “on-land” middle and high school classrooms for the open sea as they took on the role of onboard educators. 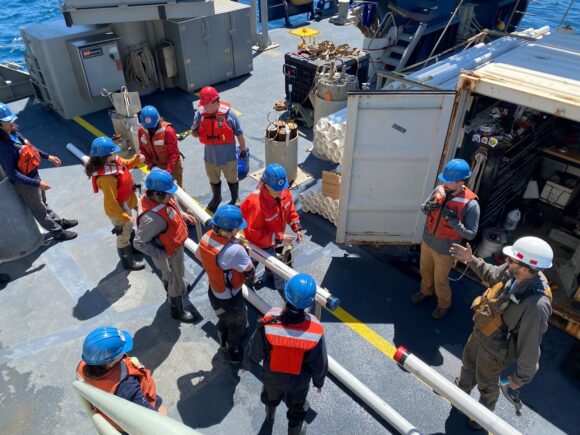 The PUFINS scientific and coring team work to process the deep-sea sediment core that was just brought on deck from the bottom of the ocean. Photo: Lauren Neitzke Adamo.

Over the course of the two-week cruise, the PUFINS team worked tirelessly to collect water column samples from nine different oceanographic stations and recover ~75 meters of sediment cores, or tubes filled with deep-sea mud. These samples will be taken back to laboratories at Rutgers University and other university facilities to reconstruct ocean temperatures from the end of the last glacial period (~20,000 years ago) to today.

Additionally, the on-board educators conducted over two dozen “Live from Sea” events, connecting with about 30 classrooms and thousands of school children, bringing ocean science directly to their classrooms. These educators also participated in all aspects of the research expedition, giving them first-hand knowledge of how cutting edge research is conducted. A unique experience that allows them to better engage their students in the content and scientific process.

“My students were able to follow us along on our expedition and see how scientists collect data, solve problems in remote locations, and learn about the history of Earth,” said 7th grade science teacher Ale Martinez. “These students and my future students will connect with the researchers I worked with, learn about their methods, and I know it will inspire them to explore the world around them for years to come.” 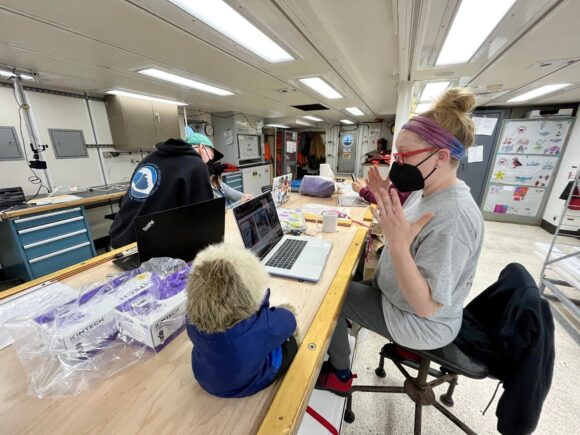 Lauren Neitzke Adamo conducts a live-stream event for the public from the main science laboratory on the R/V Atlantis in the middle of the Atlantic Ocean. Photo: Ale Martinez.

While everyone long ago regained their “land legs”, the PUFINS team is continuing their work. Sikes and Neitzke Adamo will be presenting the preliminary results and some educational activities based on this expedition at the Rutgers Geology Museum’s annual open house on January 28, 2023.  Additionally, the on-board educators will be developing a series of lesson plans and activities that will be made freely available online. Be sure to follow the PUFINS team on social media for the latest updates from the team.

Learn about the PUFINS project by viewing the “Live From Sea” recording presented by Lauren Neitzke Adamo, and reading the blog posts created by all four onboard educators.