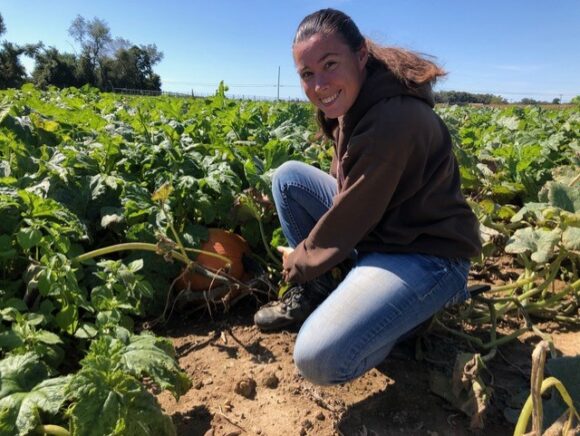 Baylee Carr (SEBS’17) Agriculture & Environmental Sciences), field technician at the Philip E. Marucci Center for Blueberry and Cranberry Research and Extension Center, has been recognized for her service to the weed science community by the Northeastern Weed Science Society (NEWSS) with the M. Garry Schnappinger Outstanding Service Award. The award will be presented on Jan. 3 during the opening session of the Northeastern Plant, Pest, and Soils Conference meeting.

The M. Garry Schnappinger – Service Recognition Award was established to recognize outstanding service, above and beyond the call of duty, from someone who works in the area of weed science under the direction of university, federal, industry or private sector scientists. The nominee must demonstrate significant contributions to the field of weed science and/or to NEWSS.

“I am honored to have been nominated by the Northeastern Weed Science Society and proud to know that I have made a difference to the weed science community,” said Carr. “To have made a noticeable impact in my field is an absolute honor. I did not think I would be able to achieve such an award in such a short amount of time during my career.”

Carr has been working hard over the last five years to help Thierry Besançon, assistant professor and extension weed specialist for specialty crops at the Philip E. Marucci Center for Blueberry and Cranberry Research and Extension Center, establishing a regionally and nationally recognized research program in weed science for specialty crops. “Carr is very deserving of this award,” said Thierry Besançon.

Carr’s previous experience was in vegetable pathology with Andy Wyenandt, extension specialist in the Department of Plant Biology at the Rutgers Agricultural Research and Extension Center, where she worked for five summers. She started working with Thierry Besancon in March of 2017 as his field technician. Carr will be returning to Rutgers for her horticultural therapy certificate to pursue a career helping the elderly and those with dementia and anxiety.