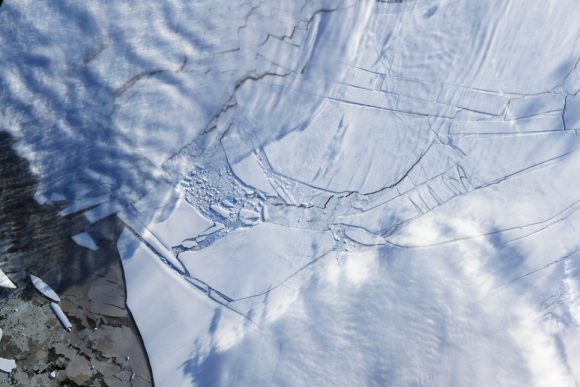 If Paris Agreement targets are not met, the collapse of melting Antarctic ice shelves – like the Wilkins Ice Shelf in 2009 – could cause catastrophic global sea level rise in the second half of the century.

The Antarctic ice sheet is much less likely to become unstable and cause dramatic sea-level rise in upcoming centuries if the world follows policies that keep global warming below a key 2015 Paris climate agreement target, according to a Rutgers coauthored study.

But if global warming exceeds the target – 2 degrees Celsius (3.6 degrees Fahrenheit) – the risk of ice shelves around the ice-sheet’s perimeter melting would increase significantly, and their collapse would trigger rapid Antarctic melting. That would result in at least 0.07 inches of global average sea-level rise a year in 2060 and beyond, according to the study in the journal Nature.

That’s faster than the average rate of sea-level rise over the past 120 years and, in vulnerable coastal places like downtown Annapolis, Maryland, has led to a dramatic increase in days of extreme flooding.

Global warming of 3 degrees Celsius (5.4 degrees Fahrenheit) could lead to catastrophic sea-level rise from Antarctic melting – an increase of at least 0.2 inches per year globally after 2060, on average.

“Ice-sheet collapse is irreversible over thousands of years, and if the Antarctic ice sheet becomes unstable it could continue to retreat for centuries,” said coauthor Daniel M. Gilford, a postdoctoral associate in the Rutgers Earth System Science & Policy Lab led by coauthor Robert E. Kopp, a professor in the Department of Earth and Planetary Sciences within the School of Arts and Sciences at Rutgers University–New Brunswick. “That’s regardless of whether emissions mitigation strategies such as removing carbon dioxide from the atmosphere are employed.”

The Paris Agreement, achieved at a United Nations climate change conference, seeks to limit the negative impacts of global warming. Its goal is to keep the increase in global average temperature well below 2 degrees Celsius above pre-industrial levels, along with pursuing efforts to limit the increase to 1.5 degrees Celsius (2.7 degrees Fahrenheit). The signatories committed to eliminating global net carbon dioxide emissions in the second half of the 21st century.

Climate change from human activities is causing sea levels to rise, and projecting how Antarctica will contribute to this rise in a warmer climate is a difficult but critical challenge. How ice sheets might respond to warming is not well understood, and we don’t know what the ultimate global policy response to climate change will be. Greenland is losing ice at a faster rate than Antarctica, but Antarctica contains nearly eight times more ice above the ocean level, equivalent to 190 feet of global average sea-level rise, the study notes.

The study explored how Antarctica might change over the next century and beyond, depending on whether the temperature targets in the Paris Agreement are met or exceeded. To better understand how the ice sheet might respond, scientists trained a state-of-the-art ice-sheet model with modern satellite observations, paleoclimate data and a machine learning technique. They used the model to explore the likelihood of rapid ice-sheet retreat and the western Antarctic ice-sheet’s collapse under different global greenhouse gas emissions policies.

Current international policies are likely to lead to about 3 degrees Celsius of warming, which could thin Antarctica’s protective ice shelves and trigger rapid ice-sheet retreat between 2050 and 2100. Under this scenario, geoengineering strategies such as removing carbon dioxide from the atmosphere and sequestering (or storing) it would fail to prevent the worst of Antarctica’s contributions to global sea-level rise.

“These results demonstrate the possibility that unstoppable, catastrophic sea-level rise from Antarctica will be triggered if Paris Agreement temperature targets are exceeded,” the study says.

Gilford said “it’s critical to be proactive in mitigating climate change now through active international participation in reducing greenhouse gas emissions and by continuing to ratchet down proposed policies to meet the ambitious Paris Agreement targets.”