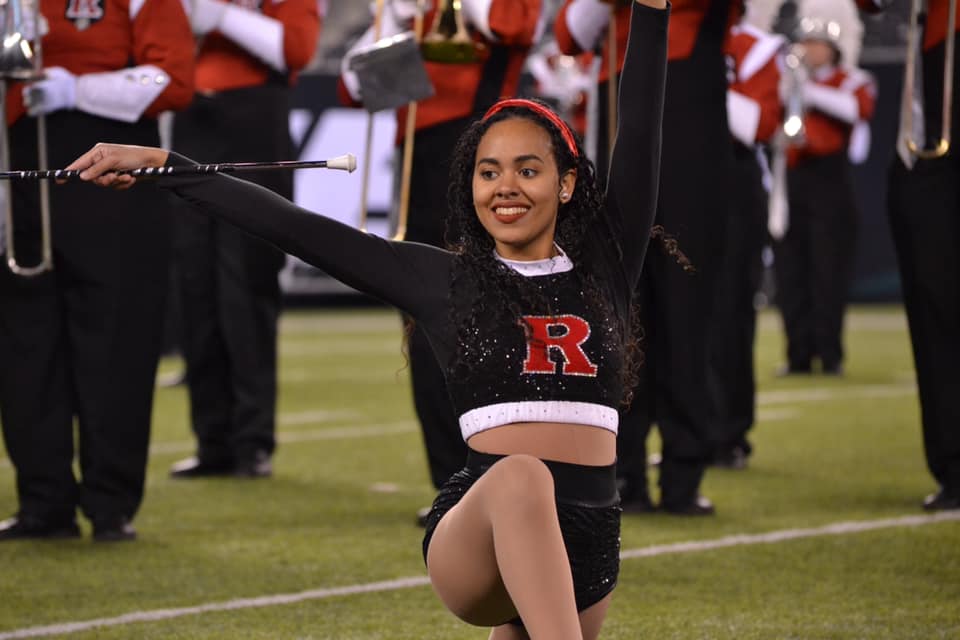 College marching ensembles from across the nation will collaborate in a virtual performance, showcasing their talents and commitment to the performing arts.

Tiahna Selby (SEBS ’21) is the current feature twirler for the Marching Scarlet Knights after spending her first two years as the Associate twirler for the band. She is a senior majoring in Biological Science and minoring in Science Teacher Education. Prior to twirling at Rutgers, Selby has twirled for Union High School in Union, NJ. Some of Selby’s accomplishments include being the 2018 College Miss Majorette of NJ, and the 2019 United States Twirling Association Solo, 2 baton, and 3 baton NJ State Champion. At SEBS, she is the 2020 recipient of the Robert P. and Maryanne B. Claus Memorial Endowed Scholarship Fund in the Teacher Education Program.

The Rutgers University Marching Scarlet Knights announced that ten students will be performing in the College Band Directors National Association (CBDNA) Intercollegiate Marching Band (IMB). They will join nearly 1,500 performers from 200 bands in 45 states and Puerto Rico, all working together to produce a virtual college marching band show

“There is no question the unprecedented circumstances associated with the COVID-19 pandemic have left our university bands feeling very empty as we were unable to perform together this fall semester. This especially impacts our 2020 senior class, and I am incredibly excited for our ten seniors that have been awarded this fantastic opportunity. Our band students put in countless hours practicing, performing, and serving our university week after week in the fall. This semester has been difficult for them not to be able to share their talent and passion with others. This is a performance opportunity these students will never forget” says Todd Nichols, Rutgers University Director of Bands.

The Intercollegiate Marching Band will perform “End of Time” by Beyonce in a video that will premiere online during halftime of the College Football Playoff National Championship Game on Jan. 11, 2021.

“This is going to be a historical performance,” says Mark Spede, president of CBDNA and the director of bands at Clemson University. “In this unusual year when bands have been unable to perform their traditional pregame and halftime shows during college football games, CBDNA is pleased to offer this opportunity with the help of its partners.”

The IMB performance will showcase all of the unique aspects of a college halftime show including musicians, drum majors, color guard members, dancers, and majorettes.

“During these challenging times, we are excited that CBDNA, along with some amazing partners, can offer an event so positive to collegiate band programs across the country,” says Barry Houser, chair of the CBDNA’s athletic bands committee and director of the Marching Illini at the University of Illinois at Urbana-Champaign. “Many students in college bands have been forced apart due to COVID-19, but the virtual Intercollegiate Marching Band will be an event that will bring together nearly 1,500 college marching band students, unified as one band.”

Rutgers University Marching Band, “The Pride of New Jersey,” is unity of music and motion. Founded in 1915 as a military drill band, the unit has grown to become a source of pride for the university and the State of New Jersey. The Marching Scarlet Knights take the field for all home football games. The Rutgers Band regularly welcomes new, enthusiastic members, who currently represent over 80 different academic disciplines. Recently, band was invited to perform for President-Elect Joe Biden and on national television at halftime for the NFL’s Monday Night Football.