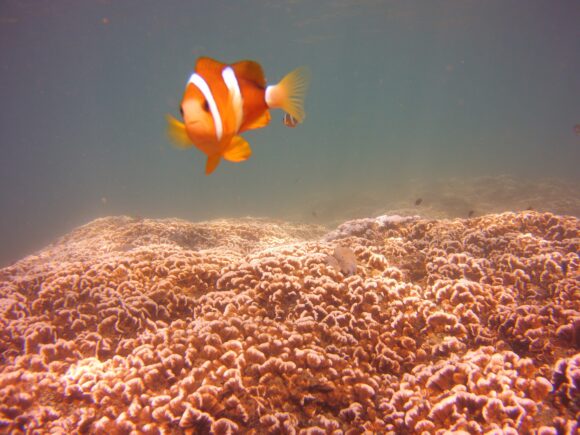 An adult yellowtail clownfish at a coral reef in the Philippines. Photo: Katrina A. Catalano.

How the larvae of colorful clownfish that live among coral reefs in the Philippines are dispersed varies widely, depending on the year and seasons – a Rutgers-led finding that could help scientists improve conservation of species.

Right after most coral reef fish hatch, they join a swirling sea of plankton as tiny, transparent larvae. Then currents, winds and waves disperse them, frequently to different reefs.

During seven years of surveys of coral reef-dwelling clownfish, scientists measured how the dispersal of larvae varied over the years and seasonally, including during monsoons, according to Rutgers-led research in the journal Molecular Ecology. They found that larvae dispersal varied a lot on both timescales.

Their research suggests that when scientists account for dispersal variability rather than just using data from a single year or an average over time, estimates of the persistence of fish populations will be lower.

“That means when we don’t account for dispersal variability, we could be overestimating the stability of coral reef fish populations,” said lead author Katrina A. Catalano, a doctoral student in the lab of senior author Malin L. Pinsky, an associate professor in the Department of Ecology, Evolution, and Natural Resources in the School of Environmental and Biological Sciences at Rutgers University–New Brunswick. “If we study dispersal variability in more species over greater timescales, we will better understand what causes the variation and can better design protected areas for the conservation of species.”

Many studies measure patterns of larval dispersal, but often in only one year, and they don’t account for how dispersal might differ over time.

“This is a problem for ecology and evolution because dispersal helps us understand population growth, adaptation, extinction and how species might be able to keep up with climate change by shifting habitats,” Catalano said. “It’s also important information for conservation and management of coral reef fish. We need to know which reef habitats are important sources of new fish for other reefs.”

Scientists conducted a genetic analysis to detect larval dispersal events in a common coral reef fish, Amphiprion clarkii, also called yellowtail clownfish and Clark’s anemonefish. The fish and their larvae lived along nearly 20 miles of coastline at 19 reef sites in Ormoc Bay, Leyte, Philippines, and the surveys went from 2012 to 2018 in partnership with Visayas State University in the Philippines.

Rutgers co-authors include Allison G. Dedrick, a former post-doc now at Stanford University, and Michelle R. Stuart, application developer in the New Jersey Agricultural Experiment Station Office of Research Analytics. Scientists at the University of Rhode Island and Visayas State University in the Philippines contributed to the study.