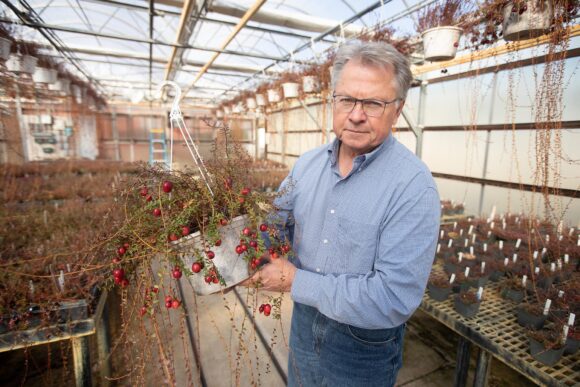 An immigrant family’s authentic American story is behind a new model of North America’s native cranberry.

Rutgers University cranberry breeder Nicholi Vorsa named his latest release, Vasanna, in memory of his parents, Vas and Anna. Immigrants from Belarus, they had few resources but encouraged him and his brother to finish their doctorate degrees.

“They saw it as a road to success in this country,” said Vorsa. “I was featured in the New York Times once – it was my early years at Rutgers. My father was very proud of that.”

That the Vorsa family was even able to immigrate was extremely fortunate. Vorsa said his grandfather, Damian, was once a cooper with as many as 20 apprentices who helped him build barrels, casks and even water towers for small villages – but the family members historically were “White Russians” or anti-communists, he said, and grandfather Damian spent time in the Soviet Union’s gulag. The family was blocked from immigrating for years during the USSR’s Josef Stalin regime, arriving in the United States in 1952, Vorsa said.

Vorsa’s mother, Anna, emigrated through Ellis Island, and met his father Vasil in Millville, New Jersey, marrying in 1954. Grandfather Damian – who still kept his cooper’s tools razor-sharp – helped the couple build a Cape-Cod-style house out of pine crate boards Vasil took home from a factory job. That was the home in which Nicholi and his younger brother were raised to take education seriously, and they did. While Nicholi took an interest in plants and today is a professor in Rutgers’ plant biology department and director of the PE Marucci Center for Blueberry & Cranberry Research & Extension, his younger brother earned a Ph.D. in chemical physics from the University of California.

“They came over here with nothing, really, and they built a life,” Vorsa said. “They loved the U.S. They were really fond of John F. Kennedy. … They were serious about education, but they enjoyed life.”

Vorsa’s Vasanna follows in the tradition of cranberry varieties being named after research pioneers in this industry. Haines, Welker, and Demoranville are all named for innovators in the Rutgers cranberry department.

The berry best for peat

Vorsa has worked to develop numerous cranberry breeds over the years but Vasanna fits into a very specific slot for the market, producing very high yields in peat fields with a moderate oceanic climate.

Vasanna’s cranberry family includes its “full-sibling” Haines. Both varieties are the result of crosses between Crimson Queen and “No. 35,” an unnamed parent plant line developed at Rutgers in the 1920s that’s still used for crosses because of its high-yielding trait.

Vorsa said he was reluctant to release a sibling of another variety but in the end did so because they are quite different, with Vasanna performing unusually well in coarse, finer, or more decomposed peat soils. Although the berry thrived in trials in Wisconsin and Oregon and is suited to those conditions, it’s also performed exceptionally well in the highly-organic peat soils of British Columbia’s Delta and Burnaby.

Vasanna is being marketed by Rutgers as suitable for the processed cranberry market because of its high crop yield potential. It ripens in the mid-season ripening period. Vasanna berries are round to ovate in shape. Rutgers said the berry has been patented in the U.S. and Canadian Plant Breeder’s rights are also being secured.

Cuttings for growers and certified commercial propagators are available from Integrity Propagation. Founder Abbott Lee said in September the company had already taken a number of orders, but still had enough stock left to plant about 50-60 acres. The cuttings are completely DNA fingerprinted, and tested for all known cranberry and blueberry viruses as well as phytoplasma (false blossom).

Lee said that Vorsa’s work in cranberry genetics will bear fruit decades into the future.

“He sorted out the gene pool to find surperior parents to breed superior progeny,” he said.