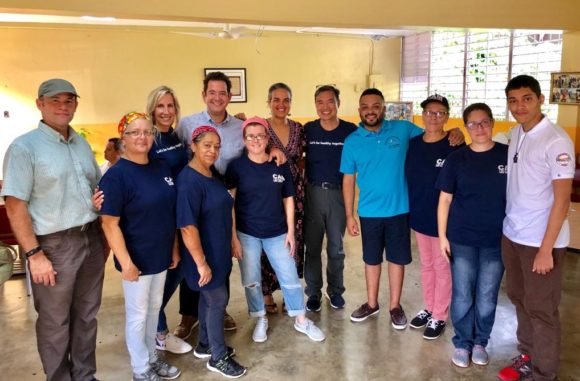 “Do it yourself.” Whether it’s by choice or necessity, these three words encapsulate a lot about Puerto Rican culture, says Rutgers faculty member and Puerto Rico native Richard Alomar.

A deep desire for self-sufficiency comes partly from the island’s agricultural heritage—”a proud history of working their own land,” Alomar says—and largely from a distrust in government institutions.

“It’s a feeling that continues to intensify following the hurricanes, recent earthquakes, and political unrest,” he says.

Alomar, an associate professor of landscape architecture in the School of Environmental and Biological Sciences and a core faculty member of Rutgers Global Health Institute, recently traveled to Puerto Rico’s Las Carolinas community as part of a collaborative effort to build resilience following the devastation brought by hurricanes Maria and Irma in 2017.

Nearly two and a half years after those hurricanes made landfall, meeting basic needs throughout the island remains a complex struggle. The storms wreaked havoc on an already unstable supply chain, and problems with electricity, water, and transportation continue to impede residents’ ability to rebuild.

One ongoing issue is food insecurity.

In Las Carolinas, a specific challenge is that 70 percent of the community’s approximately 2,500 residents are elderly, which includes many who are homebound because of illness or disability. These individuals and their caregivers rely on free or pay-what-you-can meals that are prepared and delivered by volunteers at their local Centro de Apoyo Mutuo (CAM, or Center for Mutual Support), which is part of a network of development initiatives that have emerged across Puerto Rico as residents vow to take more control of their livelihoods. 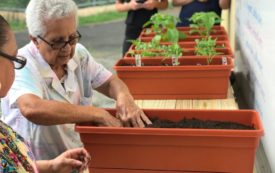 Las Carolinas residents plant seedlings in tabletop containers to create a garden at their community kitchen.

The Seeds of Change

Initiated in spring 2019 by a team of Las Carolinas residents and partners within the University of Puerto Rico, RWJBarnabas Health, and Rutgers, the garden is addressing food insecurity in the community while also invigorating a sense of empowerment and resiliency among the many Puerto Ricans who are struggling to cope in their forever-changed, post-Maria environment.

The Las Carolinas team enlisted Alomar’s expertise to help the residents plan their garden. As a registered landscape architect and the associate director of Rutgers’ urban extension office, he has worked closely with community stakeholders on many public projects. He also studied agronomy and soils at University of Puerto Rico.

Alomar visited Las Carolinas in May and July 2019. His work there was funded by donations to Rutgers Global Health Institute during last year’s Rutgers Giving Day. During the May visit, Alomar and other team members assessed soil condition, irrigation, sun exposure, production goals, and labor. Alomar’s analysis, steeped in conversations and discovery at the local level in Las Carolinas, contributed to a larger and more sustainable garden plan that the residents can implement in phases. In July, Alomar returned to install the garden and provided training to the local community members who now run it.

Starting Small and Scaling Up

They started by planting small pots of locally sourced seedlings that grow on outdoor tables at CAM Las Carolinas, which is at a vacant elementary school.

The ability to control the soil is just one reason they began with potted plants. “By asking and listening to the locals’ needs, we recommended a tabletop garden, which makes it easier for them, physically, do the gardening work,” Alomar says.

“They have really big goals for their CAM—solar power, rainwater collection, irrigation systems, fruit trees,” says Ernani Sadural, director of global health at RWJBarnabas Health and a core faculty member of Rutgers Global Health Institute, who has been a leader in the partnership efforts in Puerto Rico since day one. “Their ambitions are amazing, so we’re helping them to plan and execute the garden in a manageable way.”

Currently growing in the garden are green peppers, cilantro, and recao, which are ingredients used to make sofrito, a puree of vegetables and herbs that is the flavor foundation for many Puerto Rican dishes. Sofrito recipes also call for onions, garlic, capers, and annatto, which the Las Carolinas gardeners may grow in the future.

Beyond the garden, other positive impacts are taking root.

“The volunteers who are working on the garden and in the CAM kitchen, cooking and delivering meals, are discovering a new sense of community and social support in the process,” says Margie Heller, vice president for community health and global strategic partnerships at RWJBarnabas Health and a core member of Rutgers Global Health Institute. She and Sadural also are involved with CAM Las Carolinas’ larger efforts to become more self-sustainable, which encompass property ownership, educational programming, and emergency preparedness.

“These neighbors are getting to know each other better, enjoying the work they are doing, and finding meaningful ways to contribute,” Heller says, “which is really important to them, and good for their mental health.”

This article originally was posted by Rutgers Global Health Institute.