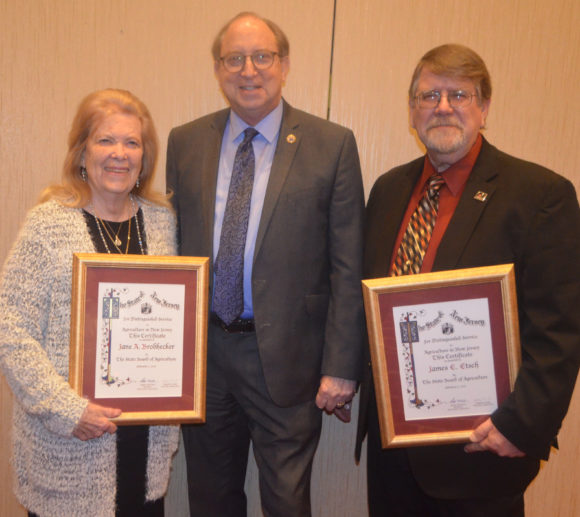 By Jeff Wolfe, State of New Jersey, Dept. of Agriculture

“Jane Brodhecker and James Etsch have each made themselves an integral part of New Jersey agriculture with their decades of service to our farmers and their dedication and standard of excellence they each bring to their own farms,” said New Jersey Secretary of Agriculture Douglas H. Fisher. “Jane’s expertise and experience on the State Agricultural Development Committee provided much needed insight to our farmland preservation efforts. James has served on several boards and agriculture-related associations for the last 30 years while continuing to grow his own operation.”

Brodhecker graduated from Indiana University with a degree in home economics and nursing with minors in arts and math. When she met and married her husband Tom Brodhecker, she spent 10 years as an “Air Force” wife. The Brodheckers raised six children.

In 1969, the Brodheckers purchased their farm in Hampton Township, Sussex County.  The farm began as a grain, hay, sheep and cattle operation and has expanded in size and diversity. Today, the Brodhecker Farm continues to grow grain and hay on their own land as well as rented land. They raise cattle and sheep and have also developed their operation to include being a New Jersey licensed livestock feed manufacturer, along with having farm-raised beef, chicken and pork. Black oil sunflower seed, field corn, hay, straw and meats are sold from the farm store.

Along with serving on the State Agricultural Development Committee, Jane has been a long-time member and leader of the New Jersey Farm Bureau Women’s Committee and found time to volunteer with 4-H and the Girl Scouts while managing their farm’s business office. The Brodheckers were also honored by the New Jersey Agricultural Society as Gold Medallion Winners in 2019.

Both Brodheckers have served in leadership positions on their county board of agriculture and on numerous committees and boards that include State and Regional 4-H Leaders Forum Planning Committees, New Jersey Agricultural Experiment Station Board of Managers, Sussex County Farm and Horse Show, as members of the Sussex County Agricultural Development Board and as delegates to the New Jersey State Agricultural Convention.

James Etsch graduated from Cook College, Rutgers University with a Bachelor of Science degree in Agriculture Science. He has served on the Middlesex County Board of Agriculture since 1988, serving as president from 2000-2002.

James is the son of Roy and Mary Etsch, who established the farm with ground originally purchased by Roy’s father. Etsch Farms has been in operation since 1931 in Monroe Township. James and his wife Caroline, now farm more than 1,000 acres in Middlesex and Monmouth Counties.

The farm’s corn maze was started in 2006 and has become a popular destination for fall agritourism as it hosts thousands of visitors each year. Etsch Farms also provides opportunities for youths by offering a day camp for children ages 7-10 for a week during the summer.

The Etsch’s have two sons, Zachary, who works at the Smithsonian Institute in Washington, and Peter, a fourth-generation farmer who is actively involved in the family business.

Editor’s Note: this article originally appeared on the State of New Jersey, Dept. of Agriculture website.