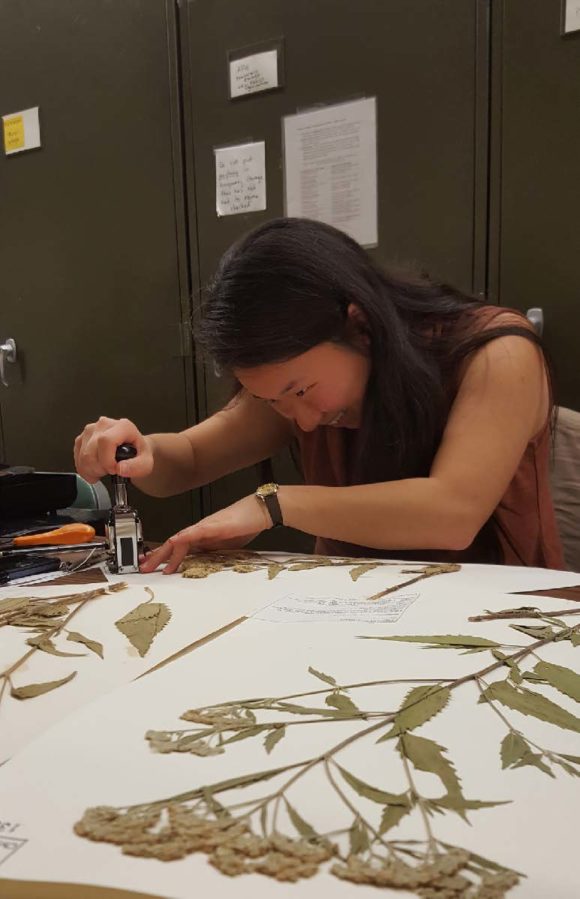 There is a certain calm that comes over you when you drop down into the basement of the Biologi­cal Science building at Rutgers University. Curating herbarium specimens has been a passion for many botanists for hundreds of years. At the University of Oxford, in special collections, the best kept book of herbaria from four hundred years ago lies in quiet reflection. In the 1600s, a monk took it upon himself to collect and describe in elegant words hundreds of species of significant plants. Though we’re not nearly as illustrious as Gregorio a Reggio was, the volun­teers and interns at the Chrysler Herbarium (CHRB) carry out the same task: to preserve and protect the plants of our generation and generations past in a time capsule. But this time capsule is not put away from prying eyes, buried from the light of day. The herbarium “time capsule” is there to share its wealth with whomever cares to come and learn from it.

Upon joining the “Herbarium Army,”¹ one is faced with what appears to be an overwhelming number of tasks to be done. However, with everyone having their own specialty, it all turns into a cohesive work environment. The mounting and repair room is for those who are zen-like at heart. It takes patience and meticulous planning to work a specimen onto its permanent mounting paper. There is a stroke of art­istry in finding the right angle for an especially long frond, or figuring out how to secure a thick, awk­wardly shaped branch. The greatest joy for me was taking on the grasses, which seemed to be bypassed by others for greener pastures (heh, heh). It’s a race to the finish when you attempt to get all the blades painted with glue and flipped onto the paper before the first glue-strokes dry. If you’re too late, some parts may not adhere properly. 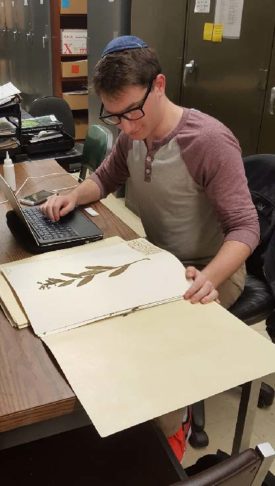 When in a more exploratory mood, there are many tasks that take you among the cabinets. When name-checking and barcoding, my favorite plant species seemingly changed by the week. Datura inoxia captured my attention through its long trumpet-like corollas. William H. White managed to make an incredible press of one from New Mexico that had the pistil and stamens perfectly preserved at the top of the flower. Others species weren’t neces­sarily visually stimulating but had history attached to them, like a specimen of Desmodium paniculatum that was collected in 1887. Its common name, panicledleaf ticktrefoil, just brings joy to me (try saying it ten times fast!). Still others had stories or people’s histories that they preserved with them. I found several specimens collected by Thomas Meehan, who was a botanist residing in Philadelphia during the late 1800s. Meehan was a nursery expert who held a position at the Royal Botanical Gardens, Kew, in the United Kingdom before traveling to the United States and establishing a nursery in Pennsylvania. My current favorite specimen is Gomphrena caespitosa. 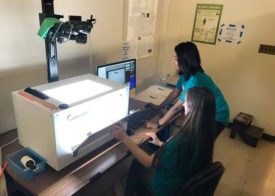 The Mid-Atlantic Megalopolis (MAM) Project has brought our herbarium to a new level. It means the digitization of important specimens and a record of all the incredible work by collectors both in- and out-of-state. I think it is an honor to be able to work on this project with the team. It’s interesting to see the progression of plant families into the database, as we are privy to all steps: barcoding, imaging, and transcribing. Though the biggest family, As­teraceae, was completed before I arrived in September, there is still much to be done. The most difficult part of the process is managing the transition to the APG organization system and barcoding. There are genera and species that have changed families or have been merged, but we haven’t transferred them into new cabinets yet. All of the raw data (via photographs) that is being fed into the MAM system only serves as a reminder that we still have a lot of exploring to do in the natural world. There are specimens sitting un­touched, unmounted, and waiting to be identified. And beyond that, there are specimens that grow in our proverbial backyard that are also waiting for us. Certainly, the herbarium shows you what has been done in generations past, but it is also a stark reminder of what is still on the horizon.

Sources for clarification on facts:

Frowde, H. 1897. An Account of the Herbarium of the University of Oxford. The Clarendon Press.

Footnote: 1The Herbarium Army is a nickname given to the numerous herbarium workers at the Chrysler Herbarium.