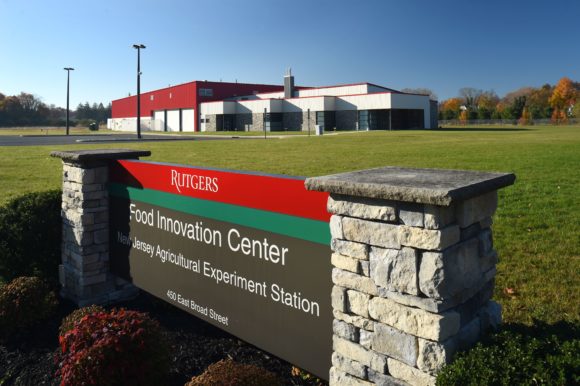 This past 4th of July, Americans had more meatless options for their barbecues – enter the “Impossible Burger.” This vegetable-based product that looks, feels, smells and tastes like a hamburger has attracted more than $700 million in funding from investors. It has currently spread to more than 1,400 outlets in the United States, including the fast food chains White Castle and Burger King, where one can purchase a meatless burger.

In April 2016, Impossible Foods came to the Food Innovation Center (FIC) at Rutgers University in Bridgeton, Cumberland County, New Jersey, to get connected to the right people in the food technology and manufacturing spaces to turn the idea of a meatless burger into a reality. The FIC, funded in part by EDA, helps small businesses and entrepreneurs by providing expertise and serving as a business incubator and accelerator.

EDA has made several investments over the years to support growth of Rutgers’ FIC and the growth of the food industry cluster. In 2001, EDA provided funding to install infrastructure and provide land in Bridgeton, New Jersey, for companies to grow in the food industry. In 2006, EDA invested $2 million to construct a 23,000 square foot building to be the home of the Rutgers FIC. In 2013, EDA provided approximately $178,000 to support the Accelerating Advanced Food Manufacturing Partnerships to address the structural and technological changes in the food supply chain. Rutgers found a gap in adoption, skills, and utilization of advanced technologies in the industry and lack of access to information, training, technology, and financing. The initiative created three regional integration strategies to address these issues, thereby strengthening the regional food industry and providing long-term opportunities for employment and economic growth.

Most recently, in 2017, EDA invested $2.5 million to keep future innovations develop a new Food Commercialization Center next door to the FIC. The Commercialization Center provides space for companies needing to expand their operations and allows American workers to learn, train and practice in the food industry. The Center is owned and operated by the Cumberland County Improvement Authority.

With the help of the FIC, after just two years of incubating the idea and producing small batches of “Impossible Burgers” from a 2,000-square-foot refrigerated room at the FIC, the company moved its operations out west to a large-scale manufacturing center in Oakland, California.

“Rutgers’ role in this success story was one-of-a-kind of mentoring and technical assistance, in terms of the expertise we provided and teaching them how to actually manufacture their product,” said Peggy Brennan-Tonetta, co-founder of the center and executive director of economic development and innovation at the Rutgers New Jersey Agricultural Experiment Station. “Toward the end of their time at the Food Innovation Center, we actually helped them to plan out their new facility in California. The Impossible Foods experience is a testament to the tremendous innovation and value that can be created when partnerships such as that of Rutgers and EDA lay the foundation for success!”

Over the course of the past 11 years, the FIC has served over 2,000 companies with a wide array of services from training to business assistance to manufacturing, and has supported the success of about 150 “graduates,” that have outgrown the facility and moved to larger manufacturing spaces.