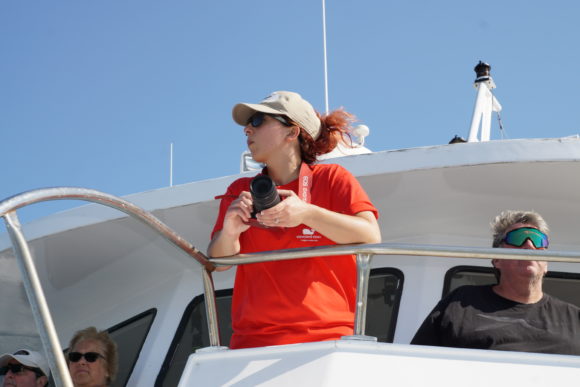 The number of humpback whale sightings in New York City and northern New Jersey has increased dramatically in recent years, by more than 500 percent, as a result of warmer and cleaner waters, raising the risk of dangerous interactions between the huge marine mammals and humans, according to a Rutgers University-New Brunswick researcher.

The increase in sightings near one of the world’s busiest ports is a safety concern for both whales and humans, especially with a new wave of migration headed close to shores this fall, said Danielle Brown, a doctoral student in ecology and evolution in Rutgers’ School of Environmental and Biology Sciences and the lead humpback whale researcher and naturalist for Gotham Whale, a New York-based nonprofit that studies and advocates for whales.

Since Gotham Whale started documenting humpback whale sightings in the New York Bight apex – the Atlantic Ocean area from New York harbor east to Fire Island and south to the Manasquan Inlet– the number has increased to 272 last year up from five in 2011. Many of the sightings have occurred less than two miles from the shore.

Brown said the most likely reason for the increased number of whales is the growing population of Atlantic menhaden, which are a major food source for the whales. Climate change is causing waters to warm and fish populations to move northward, and anti-pollution efforts have improved water quality, drawing more menhaden and the whales that feed on them.

Humpback adults, which are known for their distinctive songs, can reach 60 feet in length and weigh more than 40 tons, according to the National Oceanic and Atmospheric Administration and the National Geographic Society. They are found in every ocean in the world near coastlines, feeding on krill, plankton and small fish. They typically migrate annually from summer feeding grounds near the poles to warmer winter breeding waters. They once were hunted to near extinction and face continued threats from entanglement in fishing gear and collisions with ships, but marine mammal protection laws have helped to improve their numbers worldwide.

Brown said there’s a growing risk of dangerous interactions between the whales, the majority of which are juveniles, and humans in New York and New Jersey harbors. A whale is considered of juvenile age from the moment the calf is weaned to when it reaches sexual maturity, which can be anywhere between 6 and 13 years old.

“I’ve spotted whales with hooks and lines wrapped around them as well as scars from vessel collisions,” she said. “Because this is such a recent phenomenon, data on their distribution and the potential collision risks are limited. This is new for everyone and that’s why monitoring it is so important.”

Brown’s research includes frequent trips on whale watching vessels, most recently with Jersey Shore Whale Watch, which departs from Belmar Marina twice a week. While onboard, Brown observes and photographs the whales, monitoring how long they are in the area and documenting where they were spotted. She can identify individual whales – 122 have been catalogued since 2011 — because they have unique markings on their tails, much like a human fingerprint.

“We’ve identified whales that were seen as far away as Florida and the Caribbean, and we’ve been able to study how long they stay here in New York and New Jersey and where they go,” she said. “Some whales have stayed in this area for 38 days or more.”

The increase in whale sightings has also created an unlikely new business venture. Many fishing boats have started whale watching cruises along New Jersey and New York City harbors. While an economic boost to many fishermen, it also raises another concern.

“Fisherman are very knowledgeable about the waters, but they’re not always knowledgeable about whale behavior because whales haven’t entered this area at this rate before,” Brown said.  “The increasing numbers of whales means increasing boaters on the water wanting to watch them. It is important for them to be aware of the guidelines for watching them safely.” 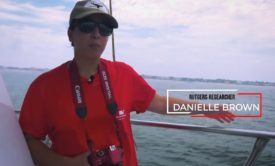 Watch a day in the life of Danielle Brown as she conducts research on increased humpback whale sightings along New York and New Jersey waters.

Brown encountered her first whale, a juvenile, when she was 10 years old onboard a whale watching cruise in Cape May with her family. It ignited a love of the creatures and her pursuit of a career in marine mammal research. She hopes the increased whale encounters ignite the same passion among New Jersey and New York visitors and residents to protect and safely enjoy them from a distance.

“People are still shocked when they hear whales have been spotted by the Statue of Liberty, George Washington Bridge, the Raritan Bay and Arthur Kill strait,” she said. “I want people to understand while it’s amazing to see, they need to be extra careful because whales are unpredictable and can pop up next to you at any moment.”

Brown said that humpback whale migration begins in the fall, meaning even more will be moving through the area. Fishermen should take extra precautions to protect themselves and the whales.

“If you’re on a boat, try to move parallel to them and never cut them off from the direction they are moving, and never chase them,” she said. “The National Marine Fisheries Service recommends a distance of at least 100 feet, and only one boat should be that close at a time, so as not to crowd the whale. If the whales appear to be feeding, give them extra space. Humpback whales are becoming more consistent in our waters, so boaters need to prepare themselves for encountering them more often. If the guidelines are followed, we can all co-exist safely.”