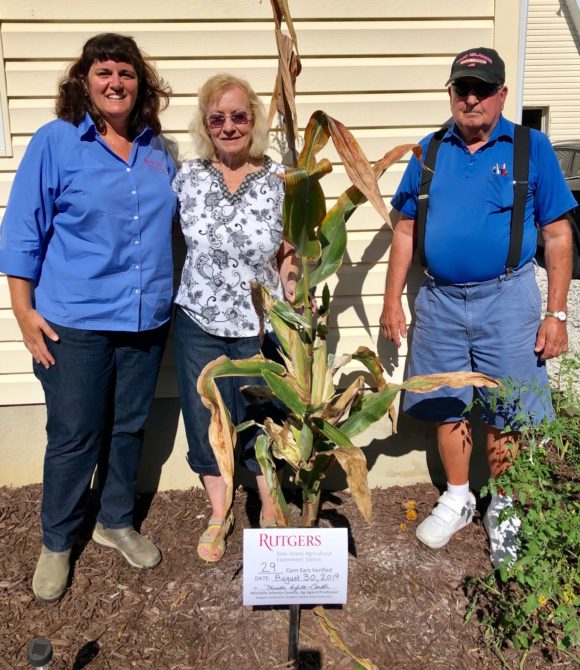 The count of 29 ears was verified by Michelle Infante-Casella (l) who is joined by Virginia and Matthew Jacovelli.

You never know what might “pop up” in your yard. This was the case for Matthew Jacovelli and his family in Deptford, NJ. Each year the Jacovelli’s feed the wildlife in their yard with store-bought animal feed. This year they purchased “Producer’s Pride” whole kernel corn to feed the squirrels. Like squirrels usually do, one buried a corn kernel (seed) in the Jacovelli’s front flower bed. Virginia Jacovelli watered the corn plant to see what it would grow to produce; not expecting it could turn out to be the world record ear-producing plant. When they began counting how many ears the single plant was growing, daughter Jean investigated the world record for number of ears. She found a listing in the Guinness World Records with a corn plant with 16 ears. At that point the Jacovelli’s interest heightened and they wondered if their plant could be something special. 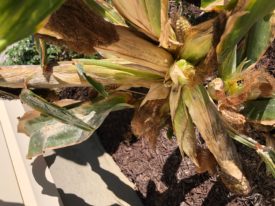 Multiple ears appear up and down the cornstalk.

One of the criteria for being awarded the record was to have an expert verify the claim. Mr. Jacovelli called the Rutgers Cooperative Extension of Gloucester County office in Clarksboro. All in a day’s work for a county agricultural agent – while judging contests at county fairs is standard practice for agents, verification for entry into the Guinness Book of World Records is a unique occasion. On August 30th, Rutgers agricultural agent and professor Michelle Infante-Casella counted the ears multiple times while being video-recorded to prove the ear-count for Guinness. With the ears tightly packed around the main stalk, in order to confirm it was an actual ear, the structure needed to contain three components: a cob, corn silks and kernels.

“I reached out to my colleague, William Bamka, agricultural agent and agronomist, and he was not surprised”, said Infante-Casella. Bamka, who works with field crops, pointed out there is a book titled, “Mutants of Maize” published by Cold Spring Harbor Laboratory highlighting corn plants with multiple ears and other mutations. He has also seen this phenomenon on occasion on field corn farms. However, both experts agreed, 29 ears on one plant is extremely rare. Infante-Casella explained how unusual it is, “Most varieties of corn have two ears per plant. One main ear and one weaker secondary ear.”

On September 5th, the Jacovelli’s received notification that they are now the Guinness World Records Title Holder for most corn cobs on a single plant. In addition to the Gloucester County Board of Freeholders presenting the Jacovelli’s with a proclamation to celebrate this record, the fruit of the squirrel’s labor will be further saved for posterity by Mr. Jacovelli preserving the corn plant. The plant is drying in his garage loft while he is constructing a wood frame with a wire cage. Once the plant is dry he will cover what he dubbed the “corn coffin” with a polycarbonate plastic sheet for viewing.