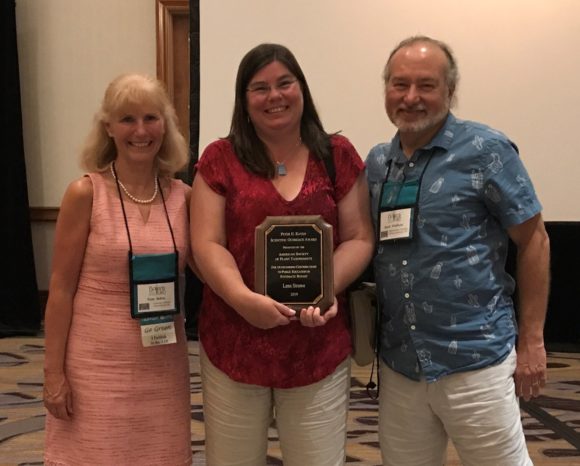 The American Society of Plant Taxonomists (ASPT) announced that Lena Struwe, professor and director of the Chrysler Herbarium at Rutgers School of Environmental and Biological Sciences has been selected as the 2019 recipient of the Peter Raven award. The award is named for Peter Raven, eminent botanist and president emeritus of the Missouri Botanical Garden, and is presented to a plant systematist who has made exceptional outreach efforts to non-scientists. It is considered the society’s most prestigious recognition of achievement in international science communication.

Since 2000, the Peter Raven award has been given annually to individuals who go above and beyond in communicating the importance of science and scientific discoveries to the public. As one supporter put it, “Lena is a one-person army for advocating the importance of botanical research and outreach to the communities beyond academia.”

Struwe’s outreach activities range in size and scope from cataloging plants found in parking lots, to documenting the flora of Rutgers University, to maintaining her blog about plants in everyday life. Her ability to improve the public’s botanical literacy and appreciation is highlighted particularly in her work on building the public’s appreciation of common “weeds,” or plants encountered in daily life. In doing so, people in urban settings can learn to appreciate the surrounding diversity in their concrete jungles as well as better understand the amazing adaptations required by these plants. Parking lot weeds were featured in a “Plants Are Cool, Too” episode, a YouTube series hosted by fellow botanist Chris Martine. These efforts demonstrate that Struwe’s work is applicable to both specialists and non-specialists alike.

“The Peter Raven award is a prestigious recognition of Lena Struwe’s outstanding scholarship and how she goes well beyond typical scholarly work to extend her knowledge through engagement with the public at all levels,” said Executive Dean Robert M. Goodman of the Rutgers School of Environmental and Biological Sciences. “She brings her deep knowledge, her passion for learning, and her caring about informed citizenship to all that she does. We are very proud of her and the example she sets for others in the academy.”

Eight scientists including Linda Watson, the newly elected president of Botanical Society of America nominated Struwe for the award. The committee found that in addition to the extensive amount of outreach and research she has accomplished throughout her career, Struwe views social media as a tool, rather than a distraction, to educate the public. This is highlighted by her use of Facebook groups, blogs and Flickr, the latter of which houses a number of photographs that have been featured in articles published by both local and international venues such as the BBC, Huffington Post and Smithsonian Magazine. Struwe’s use of social media is further validated by the sheer amount of popular press her research and outreach efforts have garnered.

Struwe received both her undergraduate degree in Biology and Earth Science and doctoral degree in Systematic Botany from Stockholm University in Sweden, which was followed by a postdoctoral position at the New York Botanical Gardens. Since 2001, Struwe has been at Rutgers University where she has cultivated and honed her skills as a scientist, educator and science communicator extraordinaire. In July, she attended the Botany 2019 conference in Tucson, AZ where she presented research on using iNaturalist as a tool for community education and biodiversity science as well as a talk on morphological and functional aspects of specialized trichomes (colleters) in Pentas (Rubiaceae).

When accepting her award at the Botany 2019 conference, Struwe called upon her fellow botanists to explore opportunities for engaging the public. “It is time that as scientists we recognize that we can’t ask the public to become citizen scientists unless we are willing to do so ourselves–not only focusing on our own areas of expertise, but also discovering and learning more about the topics outside our comfort zones,” said Struwe.

The American Society of Plant Taxonomists is dedicated to the promotion of research and teaching in taxonomy, systematics, and phylogenetics of vascular and non-vascular plants. Organized in 1935, the Society has over 1,100 members.