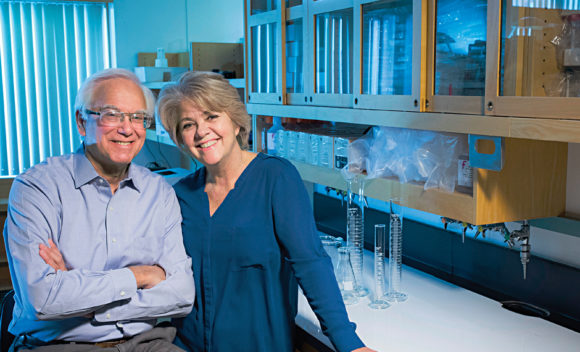 Martin J. Blaser, the director of the Center for Advanced Biotechnology and Medicine, is the Henry Rutgers Chair of the Human Microbiome and a professor of medicine and microbiology at Robert Wood Johnson Medical School. Maria Gloria Dominguez-Bello is the Henry Rutgers Professor of Microbiome and Health in the Department of Biochemistry and Microbiology at the School of Environmental and Biological Sciences and in the Department of Anthropology at the School of Arts and Sciences. The married couple are experts in studying the microbiome—the human ecosystem of bacteria that regulates health.
Photography: Roy Groething

Martin J. Blaser and Maria Gloria Dominguez-Bello are investigating the microbiome, the vast constellation of bodily bacteria that regulate our health—and may hold the key to medicine’s future.

When microbiologist Martin J. Blaser gives lectures on the microbiome—the term used to describe the trillions of competing and cooperating bacteria, or microbes, teeming in and on our bodies—he commonly invokes the nation of Greenland. As he gets underway, Blaser invites his listeners to imagine a satellite photograph of the nation 30 years ago, entirely covered in ice and snow. Imagine it again 10 years later, he implores, when there is evidence of ice and snow retreating. And now imagine a satellite shot of Greenland today, revealing significant loss of ice and snow—further evidence of the damage wrought by a changing climate.

This is the metaphor that Blaser uses to dramatize another depletion, one taking place in our own bodies. Populations in modern societies are losing large portions of their microbiomes—the human equivalent of an environmental ecosystem—because of the damage caused by the promiscuous use of antibiotics and, to a lesser extent, other medicines. He believes it is promoting contemporary afflictions like obesity, juvenile diabetes, allergies, asthma, certain cancers, and perhaps even autism. Another symptom is the emergence of “superbugs,” pathogens such as Staphylococcus aureus (MRSA) responsible for infections that are resistant to antibiotics.

Blaser—the new director of the Center for Advanced Biotechnology and Medicine and the Henry Rutgers Chair of the Human Microbiome and professor of medicine and microbiology at Robert Wood Johnson Medical School—has dedicated the last 17 years of his prolific research career to investigating the microbiome. He is convinced that the misuse of potent antibiotics—“just to be safe”—has thrown the microbiomes of those living in the industrialized world out of balance, compromising the diversity of bacteria responsible for choreographing optimal health.

Each of us hosts a diverse ecology of microbes that have coevolved with our species, although they predate Homo sapiens by a mere 3.7 billion years. Responsible for carrying out many metabolic and protective functions, they take up residence in the mouth, digestive tract, ears, nasal passages, skin, and vagina. Acquired by age 3, such microbes have a big role in shoring up our immunity and allowing us to do battle with disease. Our microbiome keeps us healthy; parts of it, however, have gone missing. And there is an important culprit, in Blaser’s view.

“When antibiotics were first discovered, they were so miraculous that people thought we could use them for everything,” says Blaser, the author of the award-winning Missing Microbes: How the Overuse of Antibiotics Is Fueling Our Modern Plagues (Picador, 2015), which has been translated into 20 languages. “But nobody really considered what they may be doing to the microbiome. Now, it’s clear that antibiotics do a lot. Nature has a design, and every time we interfere with it through medical intervention, there is a biological cost.”

The biggest cost may occur during the formation of the microbiome, which takes place during a critical period—between birth and a child’s third birthday, according to Maria Gloria Dominguez-Bello. She is a microbial ecologist who shares a research interest in the microbiome with Blaser, to whom she is married. They first collaborated more than 20 years ago when they investigated the ancestral roots of a bacterium known as Helicobacter pylori, a known cause of stomach ulcers. Dominguez-Bello is among the researchers who have demonstrated that children born by means of cesarean section are more susceptible to obesity, juvenile diabetes, and other chronic illnesses because they are not exposed to the beneficial bacteria lining the mother’s birth canal.

Other factors such as not breastfeeding a newborn or exposing the child to antibiotics administered pre- and postnatally to the mother or baby, or both of them, increase the possibility of compromising the developing microbiome. Babies are magnets for bacteria, and they need the exposure to as many of them as possible, according to Dominguez-Bello, the Henry Rutgers Professor of Microbiome and Health in the Department of Biochemistry and Microbiology at the School of Environmental and Biological Sciences and in the Department of Anthropology at the School of Arts and Sciences, and the interim director of the New Jersey Institute for Food, Nutrition, and Health.

Another research interest of Dominguez-Bello’s has taken her deep into the remote regions of South America to investigate hunter-gatherer societies. They provide a unique opportunity to understand the microbiome before it has been exposed to modern life practices. In the first study of its kind, published in 2015 and based on her 2012 research, Dominguez-Bello discovered that the more reclusive a population, the more diverse the composition of their microbiome—and the more similar it is to our ancestors.

“Up until the turn of this century, we didn’t know much about the microbiome,” says Dominguez-Bello. “There was the prevalent view that bacteria are all bad—pathogens. Louis Pasteur and other microbiologists of the late 19th and early 20th centuries established, with good reason, the role of bacteria in epidemics and the potential harm of microbes. But, we didn’t know—and it was revolutionary at the end of the 20th century—that we carry so many beneficial bacteria that evolved with us.”

DNA sequencing advances have allowed microbiologists to decipher the genetic sequence of all of the major human bacterial pathogens, Blaser points out. “Scientists now know,” he says, “which genes are found in each organism and the potential structure of the products they make.” Moreover, scientists are learning more about how microbes affect the regulation of our genes. “Now we understand that humans are an ecosystem,” says Dominguez-Bello, “and we now understand the impact of eliminating part of these genomes that help regulate our faculties.”

For people living in modern societies—particularly in cities where the vast majority of population gains worldwide will continue to take place—can anything be done to salvage their depleted microbiomes? “If we are losing the richness of the microbiome, it might be too late before we figure out the functions of the microbes,” says Dominguez-Bello.

The couple, however, remains optimistic. A thorough understanding of the kaleidoscopic function of bacteria in the human body will allow microbiologists to assess the damage that has been done to the microbiome, stop its depletion, and start the restorative process by reintroducing beneficial bacteria. (For example, fecal microbiota transplantation, requiring transferring feces from one person to another, has successfully cured people afflicted with Clostridium difficile [C. diff], a bacterium that can cause symptoms ranging from diarrhea to life-threatening inflammation of the colon.) Part of the process would involve finding the healthy bacteria in indigenous cultures, evaluating and harvesting the microbes, and storing them in a protective facility where strains could be replicated and then reintroduced into populations.

Dominguez-Bello and Blaser envision a repository that contains strains of all known bacteria. The idea came to  Dominguez-Bello after she learned about and made inquiries with the Svalbard Global Seed Vault, which houses the world’s largest collection of crop diversity. Located on a remote Norwegian island in the Arctic Ocean, the seed-storage facility is a hedge against the ongoing destruction of the diversity of Earth’s plant life.

“We would like Rutgers to be one of the leading university institutions and a pillar of a microbiome vault,” says Blaser, who, like Dominguez-Bello, recently arrived at Rutgers, attracted to the university’s vast resources that could be marshalled. “Given Rutgers’ history in microbiology and the faculty members interested in microbiology, it makes sense. It would potentially involve other facets of Rutgers because the vault might require expertise in disciplines like engineering, education, agriculture, and oceanography: our focus is preserving the diversity of the microbiome in humans, but there is also an interest in preserving the microbiota in the oceans and in the soil—both depleted because of modern practices.”

Beyond being a key collaborator of the microbiome vault, Rutgers, through its established research engagements worldwide, particularly in developing nations, could be a leader in training the health care officials and scientists at local universities and other facilities responsible for creating local bacterial collections that would feed the vault.

“What has become clear is that the relationship between humans and their microbiomes is a really important scientific frontier that will affect the practice of medicine,” says Blaser. “Reversing the effect of depleting microbiomes is not going to happen tomorrow because it is too complex. But the biology is so deep, so pervasive, that we, and many others, believe that knowledge of the microbiome is going to transform our knowledge of human health and medicine.”