Life may have arisen near hydrothermal vents rich in iron and sulfur. The earliest cells incorporated these elements into small peptides, which became the first and simplest ferredoxins – proteins that shuttle electrons within the cell, to support metabolism. As cells evolved, ferredoxins mutated into more complex forms. The ferredoxins in modern bacteria, plant and animal cells are all derived from that simple ancestor. Figure: Ian Campbell, Rice University.

A Rutgers-led study sheds light on one of the most enduring mysteries of science: How did metabolism – the process by which life powers itself by converting energy from food into movement and growth – begin?

To answer that question, the researchers reverse-engineered a primordial protein and inserted it into a living bacterium, where it successfully powered the cell’s metabolism, growth and reproduction, according to the study in Proceedings of the National Academy of Sciences. 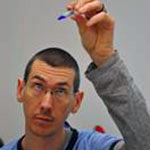 “We are closer to understanding the inner workings of the ancient cell that was the ancestor of all life on earth – and, therefore, to understanding how life arose in the first place, and the pathways life might have taken on other worlds,” said lead author Andrew Mutter, a post-doctoral associate at Rutgers University’s Department of Marine and Coastal Sciences.

The discovery also has implications for the field of synthetic biology, which harnesses the metabolism of microbes to produce industrial chemicals; and bioelectronics, which seeks to apply cells’ natural circuitry for energy storage and other functions.

The researchers looked at a class of proteins called ferredoxins, which support metabolism in bacteria, plants and animals by moving electricity through cells. These proteins have different, complex forms in today’s living things, but researchers speculate they all arose from a much simpler protein that was present in the ancestor of all life.

Similar to the ways biologists compare modern birds and reptiles to draw conclusions about their shared ancestor, the researchers compared ferredoxin molecules that are present in living things and, using computer models, designed ancestral forms that may have existed at an earlier stage in the evolution of life.

That research led to their creation of a basic version of the protein – a simple ferredoxin that is able to conduct electricity within a cell and that, over eons of evolution, could have given rise to the many types that exist today.

Then, to prove their model of the ancient protein could actually support life, they inserted it into a living cell. They took the genome of E. coli bacteria, removed the gene it uses to create ferredoxin in nature, and spliced in a gene for their reverse-engineered protein. The modified E. coli colony survived and grew although more slowly than normal.

Study co-author Vikas Nanda, a professor at Rutgers Robert Wood Johnson Medical School and Center for Advanced Biotechnology and Medicine, said the discovery’s implications for synthetic biology and bioelectronics come from ferredoxins’ role in the circuitry of life.

“These proteins channel electricity as part of a cell’s internal circuitry. The ferredoxins that appear in modern life are complex – but we’ve created a stripped-down version that still supports life. Future experiments could build on this simple version for possible industrial applications,” Nanda said.

The study, which included researchers at Rice University, was funded in part by a grant from the NASA Astrobiology Institute and funding from the Gordon and Betty Moore Foundation, and included members of Rutgers ENIGMA, a research group seeking to understand how proteins evolved to become the predominant catalysts of life on earth.