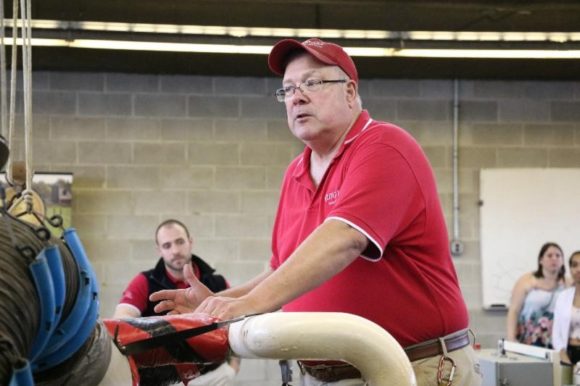 Kenneth McKeever speaks about the type of research being conducted at the Equine Exercise Physiology Laboratory during a recent Ag Field Day at Rutgers Day. The lab is a world-class facility, one of only two such laboratories not associated with a veterinary college in the U.S.

Kenneth McKeever, professor in the Department of Animal Sciences and the associate director of research at the Rutgers Equine Science Center, has been elevated to the rank of Fellow of the American Physiological Society (APS). Considered one of the earliest national disciplinary societies in the sciences, the APS was founded in 1887.

McKeever has been a member of the society since 1992 and the elevation to Fellow recognizes his more than 30 years of work within the field of physiological science.

According to APS, “the rank of Fellow of the American Physiological Society is an elite member status reserved to honor distinguished leaders who have demonstrated excellence in science, have made significant contributions to the physiological sciences and related disciplines and have served the society.”

In 1995, McKeever joined the faculty in the Department of Animal Sciences at Rutgers as an associate professor and became a full professor in 2009. Over his Rutgers career, he has established one of the most active equine exercise physiology laboratories in the U.S. On a basic level, his research has focused on comparative exercise and cardiovascular physiology with a particular interest in the effects of aging on the integration of the cardiovascular, renal, and endocrine systems in the control of blood pressure, blood volume and fluid and electrolyte balance. On an applied level, his research has focused on the effects of performance enhancing practices on the physiological responses of the equine athlete.

McKeever has authored or co-authored more than 200 book chapters, journal articles and proceedings papers, and more than 60 abstracts that have advanced the understanding of the athletic horse. He has served as president of the Equine Science Society, fulfilling his two-year role as the leader of the society in June 2019. In addition, he’s served as the Editor-in-Chief of the journal, Comparative Exercise Physiology, and as a Fellow of the American College of Sports Medicine.