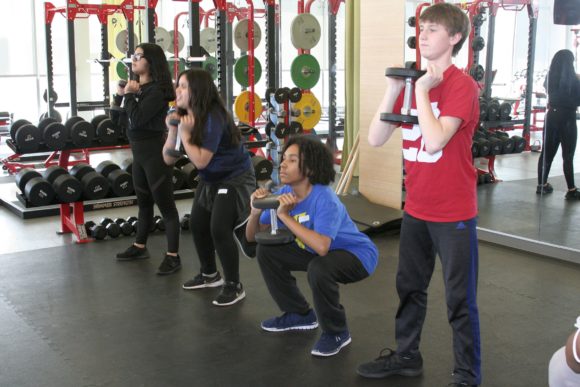 At a time when adolescents may have already established attitudes towards physical activity and fitness and are on the verge of beginning high school, itself coming with added social influence and stress, eighth grade can be a turning point for students if there is a motivating influence. This opportunity was presented to 44 eighth-graders at Greater Brunswick Charter School (GBCS) in New Brunswick, with the introduction of movement proficiency training provided by the Rutgers Center for Health and Human Performance (CHHP) at the New Jersey Institute for Food, Nutrition and Health. 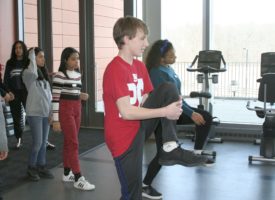 Proficiency, or lack thereof, with regard to basic movements such as running, jumping, throwing and catching will either help or hinder when it comes to an individual’s willingness to participate in physical activity or sport. In an effort to increase physical activity of youth, positively impacting obesity and diabetes outcomes, it is essential that individuals feel confident in their ability to perform basic athletic movements and improve their long-term athletic development.

According to the National Strength and Conditioning Association, athleticism is the ability to repeatedly perform a range of movements with precision and confidence in a variety of environments, which require competent levels of motor skills, strength, power, speed, agility, balance, coordination, and endurance. Similarly, long-term athletic development (LTAD) is the habitual development of “athleticism” over time to improve health and fitness, enhance physical performance, reduce relative risk of injury, and develop confidence and competence of all movement. This approach is about developing “athleticism” and not “athletes” per se– the human physique is designed to move, regardless of participation in organized sport. 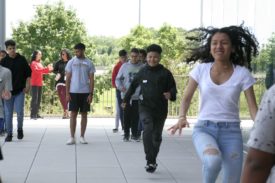 Students confident in the warm-up drills and skills they have been practicing over the course of the program.

In an effort to capture the unique qualities of athletic development and to maximize impact on the health of today’s youth, CHHP developed a multi-faceted pilot program, funded by a grant from The Horizon Foundation for New Jersey and in cooperation with the New Jersey Healthy Kids Initiative. The eighth graders from GBCS attended weekly sessions at CHHP, in place of one of three days per week of their regular physical education class. Under the supervision of Michelle Arent, director of training and conditioning, athlete mentors assessed movement proficiency in three basic movements (squat, push up, hip hinge) and provided training and education on basic physical movement skills (run, jump, throw, catch). Students’ movement proficiency was evaluated at the beginning and end of the program, in addition to their completing a final program feedback questionnaire.

One key aspect that differentiated this program from other exercise instruction interventions was the utilization of athlete mentors rather than adult educators to instruct each session. “While buy-in is critical in any behavior change endeavor,” said Arent “our team felt that it was particularly important that students be able to identify with and connect with their instructors to facilitate change in a short amount of time.” 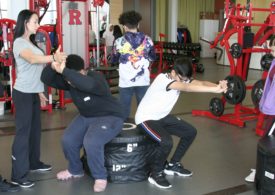 While execution and proficiency of movement improved for all, the program impact went beyond the gym carrying over to other aspects of their lives, as noted by their teachers. Just a few weeks into the program, GBCS social studies teacher Daniel Cyckowski noted the excitement with which the students would enter the CHHP quickly putting their phones away in anticipation of the day’s events. This was in contrast to their hesitancy and reluctance to part with their electronics upon arriving at the CHHP at the outset of the program.

While they do some circuit training at school, Jason Herzog, GBCS physical education teacher, noticed the training’s improvement in their form, as well as their enthusiasm to participate. “Some of my students who don’t normally participate are participating here all the time, and they’re having such a good time. They love it – they come in with sore legs, and the next day they’re feeling better. Their performance is definitely getting better everywhere. They’re doing a great job here. We would come every day if we could.” 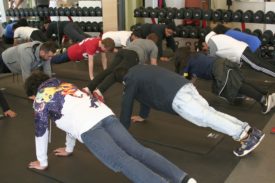 Alyssa Alfred, a science teacher at GBCS, noted the changes in the students’ personal lives as well as in other academic classes. Alfred commented, “I’ve also seen a couple students who have brought exercise into their after school life, where it wasn’t there before. Some of the girls have signed up for our running club but I’ve seen some students just on their own make more of an effort and they talk about how now they’re more active at home. In class, we were doing the body systems, so we talk about respiratory connections; they make some of those connections to stuff they do here. And they do the same things in gym, but bringing them outside of their environment encourages them to think about it more. I think it’s been great for them.”

Upon program completion students reflected on how they would use something they learned during their visits to the CHHP. Three main areas emerged in their responses- sport, life, and general health. Students indicated that they would use their knowledge for improved running and jumping as well as proper exercise and movement execution to avoid injury, improve posture, and improve their overall health. True to the goal of the program, students walked away feeling strong and empowered, and having made positive changes incorporating more physical activity into their every day lives.

The Horizon Foundation for New Jersey is a charitable organization created by Horizon Blue Cross Blue Shield of New Jersey to improve the health of New Jersey residents by promoting health prevention and education programs.