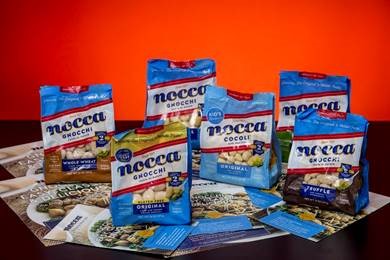 Sure, the package says “Product of Italy” but Nocca gnocchi is definitely an American product.

CEO Nicholas Wooller spent a decade in the Italian packaged goods industry, exporting products to be rebranded in private label in American grocers. Nocca isn’t one of those rebranded products.

“The idea of Nocca is to build products that are traditional abroad on modern consumer habits in the United States, trying to create an image that’s more modern and more accessible,” Wooller said. “We could say it’s an Italian product in the U.S., but I’d rather say it’s a new player in the pasta category bringing innovation to consumers.”

Gnocchi has yet to take off in the U.S., Wooller said. Most aficionados are from the Italian-American population or in areas like New Jersey with a high population of Italian-Americans. Others have learned about it through its gluten-free iterations.

Wooller says gnocchi is more versatile than traditional pasta. It cooks naturally in two minutes, is lighter in carbohydrates, and is versatile — good boiled or pan fried. In America, it just needed some life breathed into it, he said. But how do you “breathe life” into a 400-plus-year-old ingredient?

Holtaway, a market research veteran with nearly two decades cumulative experience at Campbell Soup Co. and Unilever, has spent her career developing an understanding of consumer wants, and applying the understanding in the areas of new product development and marketing. She’s been the associate director of business development at the FIC for 17 years.

“We were trying to help Nocca determine how the product in the package was perceived by his target audience,” Holtaway said. “We screen for individuals that are currently utilizing a particular product or category to make sure that we’re talking to [the right] people. We got a better understanding of how they would use that product and what their perception of the product in the packaging was, so at the end of the day, we can guide our clients based on the perceptions of the consumer target.” 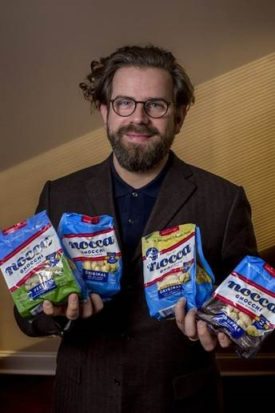 Nick Wooler, CEO, Nocca, with some of his gnocchi.

With Holtaway’s help over the course of a year, Wooller was able to determine that his packaging was on the right path for consumers to relate to it.
In that time, Wooller also took a unique spin on the product within the packaging, settling on six flavors: original potato, truffle and porcini mushrooms, pesto, gluten-free, whole wheat, and mini gnocchi known as cocoli.

Grocery buyers have taken note: since it was introduced to the market in February of last year, Nocca, which is based in Moonachie, has landed on shelves in over 300 stores in more than a dozen states. Because grocery buyers typically evaluate their pasta offerings in May and June, Wooller expects to attract more buyers in a few months.

“There hasn’t been a lot of sexy things happening on the pasta shelf in the last 10 years,” he said. “That’s a part of the supermarket that’s not subject to much innovation, so a couple retailers last year said they hadn’t reserved any space on the shelves for pasta, but to ‘please come next year because we’re going to be looking for it.’”

Now, Wooller wants to focus not on market research and sales strategy, but on bettering what’s inside the package. He believes that there’s a natural substitute for the preservatives in Nocca that make it shelf stable, and he plans on tapping into the FIC to help him explore that.

“It would be another great breakthrough, not only for us but for the industry,” he said.

Without the FIC, he wouldn’t have the opportunity to find out. Nocca alone isn’t big enough to sustain an active R&D department, and Wooller said that at this phase in the business, any R&D folks would have been redirected to marketing and other operations.

This story originally appeared in NJBIZ.