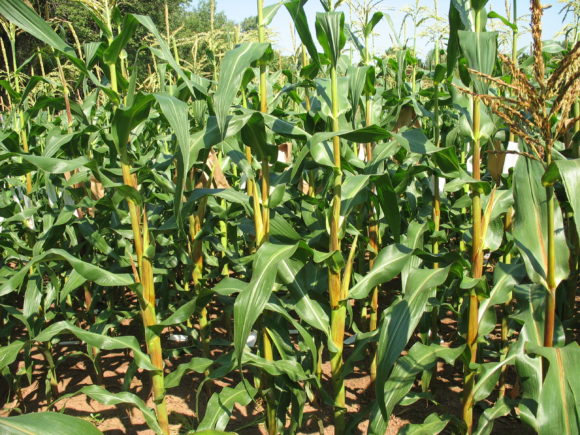 Researchers may be able to improve corn yields and nutritional value after discovering genetic regulators that synthesize starch and protein in the widely eaten grain, according to a Rutgers-led study.

The research, published in the journal Proceedings of the National Academy of Sciences, could benefit millions of people who rely on corn for nutrition in South America, Africa and elsewhere.

The world’s corn supply depends on improving its yield and quality, which relies on the accumulation of starch and proteins in the grain’s endosperm, the study says. Endosperm, an important source of human nutrition that contains starch, oils and proteins, is the seed tissue that surrounds embryos.

“We found a novel approach to discover new regulators in the synthesis of starch and protein, which determine grain yield and quality,” said study lead author Zhiyong Zhang, a post-doctoral fellow at the Waksman Institute of Microbiology at Rutgers University–New Brunswick.

The scientists discovered how corn starch and protein are simultaneously synthesized in the endosperm, which could allow them to find a good balance between nutrient quality and yield, Zhang said. Corn domestication and modern breeding have gradually increased starch content but decreased protein accumulation in endosperms.

The researchers looked at key proteins in corn kernels known as zeins, which are devoid of lysine, an essential amino acid (a building block of proteins), resulting in poor nutrient quality. During corn breeding over decades, people increased lysine content by cultivating corn with lower levels of zeins. Still, today’s lysine levels are too low to meet the needs of the world’s rapidly growing population.

So, molecular geneticists and corn breeders are trying to dramatically reduce zein levels to improve corn nutrient quality by focusing on blocking them and so-called transcription factors. Transcription is when the information in a gene’s DNA is transferred to RNA, resulting in proteins that play key roles in the body’s tissues, organs, structure and functions.

The research team found that two transcription factors play key roles in regulating the synthesis of starch and protein, paving the way for further research to fully understand the balance between nutrient quality and yield at a molecular level.