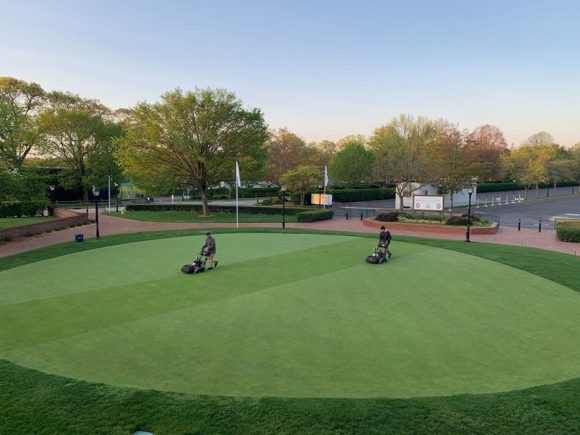 Backstage at the PGA Mowing Greens on the Black Course at Bethpage – Photo Credit Tommy McDaniel.

Most notably, Andy Wilson, who graduated from the Rutgers Two-Year Turfgrass Management Certificate Program in 2000, is the Director of Agronomy at Bethpage State Park. He is responsible for the state park’s five golf courses, including the Black Course. A mainstay on Golf Digest’s “America’s 100 Greatest Golf Courses” list, the Black Course is one of the toughest public courses in the country.

In addition to the high profile players, Wilson expected 200,000 spectators from all over the world to attend the event. To manage these crowds, there were approximately 3,600 volunteers on hand to help with all aspects of this famed event. Of those, he selected only 100 qualified superintendents and greens keepers to work on the grounds crew and we are proud to brag that a number of those mowing and blowing turf managers are Scarlet Knights! 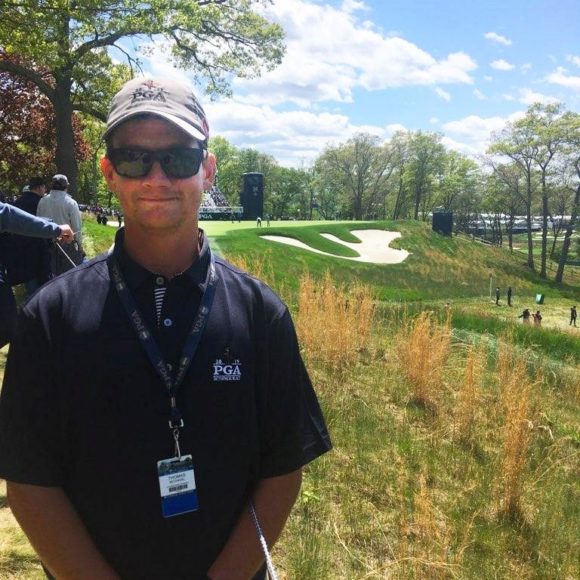 Tommy McDaniel, from Saint Louis, Missouri, is a prime example. He started his first ten-week session of the Rutgers Two-Year Turfgrass Management Certificate Program in January of 2019 and is now fulfilling the educational program’s work experience / internship requirement at Bethpage. He will return to Rutgers to complete the second ten-week session of the certificate program starting in January 2020.

A day in the life of a Bethpage intern during the PGA Championship starts with getting up before the sun rises. “I wake up at 2:30am. I come into work, check in with the assistants to make sure everything is hooked up and ready to go, we do the morning meeting, then I go mow my greens,” McDaniel said. “I am here all day. I am on call, but I get a little bit of a rest period before setting up for the night shift. After the evening shift, I sleep for as much time as I possibly can.”

During the tournament, McDaniel labeled carts, prepared them with the proper equipment, and routed out where each needed to go. While he enjoyed cutting the galleries though the high rough before the games began, his favorite turf management task was mowing the greens.

“It is still blowing my mind that I get to mow greens for the top 100 golfers in the world,” McDaniel said with genuine reverence. “If you would have told me a year ago where I’d be at today, I would have laughed.”

The breadth of the behind the scenes operations at the PGA Championship was as impressive as the skill of the golfers who competed for the Wanamaker Trophy. McDaniel described the multitude of people hustling to make sure the event was flawless. “There are staff members, security crews, PGA professionals, maintenance workers, volunteers from all over the world, vendors, the company that built the bleachers, the team that put up the TV towers and scoreboards, medical personnel, and more.” It was an experience in and of itself to be part of such an extensive team. 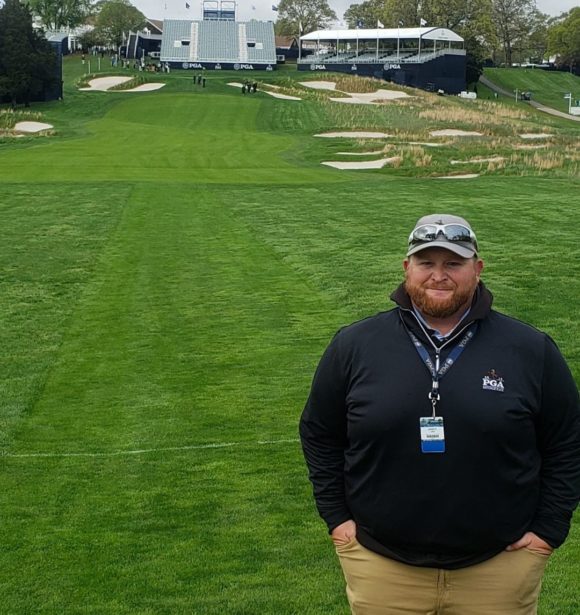 Another RU turf alum, James Lord, was thrilled to volunteer at and experience his first major tournament. He graduated from the Rutgers Two-Year Certificate Program in 2009 and works as the Superintendent at Mountain Valley Golf Course in Barnesville, Pennsylvania.

For one straight week, Lord slept in a college dorm room and rode a shuttle to the golf course. Shedding more light on the ins and outs of PGA Championship set-up, he described one of his more meticulous job responsibilities.

“I was on what they call the ‘fluff crew,’” he said. High traffic areas, like spectator crosswalks and the exit points on the greens where players walk to the next tee, get trampled down throughout the day. The “fluff crew” followed other teams of greens keepers as they performed various tasks on the greens, fairways, and bunkers. They used backpack blowers and rakes to fluff the trodden turf back up. “This is not a normal day-to-day operation,” Lord said. “It is one of the fine details that you only do for a tournament like this.”

Another unique outcome of being involved with such an internationally renowned event is meeting so many different people from all over the world. Volunteers, for the grounds crew alone, traveled from 18 states and almost a dozen countries, including Austria, Canada, England, Ireland, and Taiwan.

“People are selfless. They drop what they are doing, they leave their jobs and families for a week or more, just to give back to the sport,” Lord said. “It is pretty neat to see how people come together in this industry!”