The “Consortium for Advanced Bioeconomy Leadership” (CABLE) is a 20-university partnership that aims to guide the next generation of bioeconomy leaders. Participating universities, which include Rutgers, select one student to become its student delegate whose role is to collaborate in small working groups with the other student delegates to research and present a specific industry problem facing the bioeconomy.

The bioeconomy is generally understood to comprise those parts of the economy that use renewable biological resources from land and sea – such as crops, forests, fish, animals and micro-organisms – to produce food, materials and energy, according to a succinct explanation by the European Commission. Given the novelty of the bioeconomy, a secondary component of the CABLE program is completed when the delegate successfully coordinates an outreach event in order to teach their peers and professors more about the emerging bioeconomy. 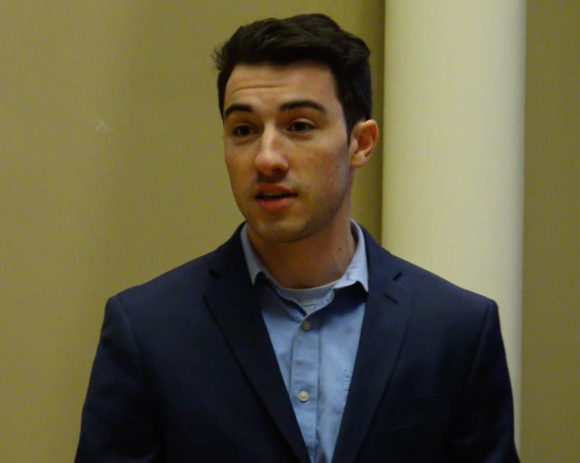 Maxwell Melnick addressing the audience at the CABLE event he organized on March 6.

Maxwell Melnick, undergraduate major in environmental sciences with a minor in sustainability, is in the second cohort of CABLE student delegates. He represents Rutgers alongside his faculty mentor, Serpil Guran, director of the Rutgers EcoComplex, a designated Clean Energy Innovation Center. CABLE student delegates are exposed to industry leaders and learn about industry-level issue and trends that help to prepare them for a career in the growing bioeconomy. In fulfillment of his program requirements, Max organized the CABLE event, “Transforming Transportation for a Low-Carbon Future,” which was held March 6 at the Livingston Student Center. Guran served as the moderator of the event.

Max first began his CABLE experience by conducting research on the technical challenges of the emerging electric vehicle and biofuel transportation markets. Throughout his research, he understood that he was going to need to leverage this information in order to get as many of the student body interested in the topic as possible.

Among the Rutgers experts he attracted as event speakers were Shishir Chundawat, assistant professor in the Department of Chemical and Biochemical Engineering, and Jon Carnegie, executive director of the Alan M. Voorhees Transportation Center at Rutgers. Michael Hornsby, chief project development officer at the New Jersey Board of Public Utilities, was also among the speakers

Max’s outreach efforts to get students interested in the bioeconomy resulted in an attendance of about 20 persons who engaged in a spirited discussion about the electric and biofuel transportation industries. According to Max, participants in the CABLE event left better prepared to make informed decisions regarding their transportation options. He felt this was of immense value since, in his view, the emissions that result from the transportation industry are significant and an educated public is the foundation for widespread change.