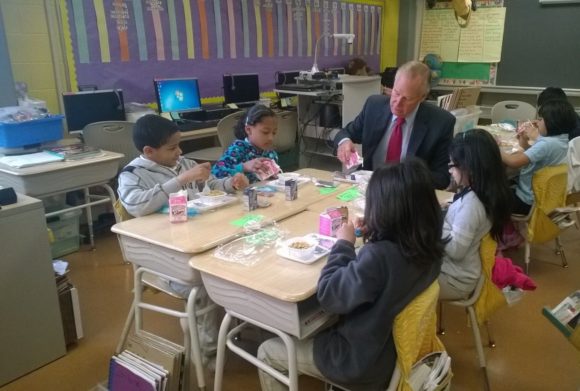 Mayor Cahill eating breakfast after the bell with students at Paul Robeson School.

“Breakfast After the Bell” (BATB) is the practice of serving breakfast to students after the first school bell of the school day rings. A major benefit of this approach is that students who do not arrive early enough to eat breakfast in the cafeteria before the bell have the opportunity to eat breakfast, which has been shown to improve school performance and behavior. Over the last several years, BATB has become the unofficial gold standard in serving school breakfast—particularly in large, low-resource, urban districts—due to the program’s ability to serve large numbers of students.

The breakfast program in New Brunswick Public Schools (NBPS) began as a pilot in Spring 2014 and was then expanded to serve all students in Kindergarten through 8th grade in the Fall of 2014. As a result of this new program, in May 2015, Advocates for Children of New Jersey rated New Brunswick as one of several high-poverty school districts “making progress” in serving breakfast to eligible students, having served breakfast to 77% of its students that year, compared to about 44% in the previous year.

While the early data were encouraging, there was a lack of understanding of the BATB program and how it operates over time in a low-income, urban school district. There was also little data on student, teacher and staff experiences of the program. A research team from Rutgers decided to take a closer look at the breakfast program in New Brunswick, to gain an understanding of how it was working for students and other stakeholders. The team was comprised of Cara Cuite (Dept. of Human Ecology), Jennifer Shukaitis (Dept. of Family & Community Health Sciences), and Gina McKeon (PhD candidate in the Dept. of Nutritional Sciences). This research project was supported by a Rutgers University Community-University Research Partnership Grant to the New Brunswick Board of Education and the Department of Human Ecology.

The research team used a multi-method approach. Data collection took place during the 2016-17 and 17-18 school years. The team conducted the following: qualitative interviews with school staff, student focus groups, and distributed teacher, parent and student surveys, all of which aimed to ascertain opinions on school breakfast and breakfast eating habits. The school district provided data such as attendance, tardiness, and school meal participation rates.

The research findings include that breakfast participation increased significantly in the first two years after BATB was implemented. However, as fatigue with the breakfast program set in, administrators altered the ways in which breakfast was served at different schools, and a new food service company was brought in, these initial increases have not been sustained, particularly in the Middle School. Many parents report that the breakfast program has made their children more likely to be on time for school and their morning routine easier.  Students identified a common theme of fatigue with food choices, particularly cereal. The vast majority of Middle School students reported that they do not eat breakfast at home, contrary to what their principal believed. In addition, the majority of middle school students reported positive impressions of the breakfast program. Some teachers reported dissatisfaction with the healthfulness, quality and variety of the breakfast served, but the vast majority of teachers agree that BATB is worth the effort and should continue.

The district has used the team’s data in their decision making and decided to not renew the food service company that was in place when the project first started, in part based on our work. In addition, the principal of the Middle School has decided to change how they serve breakfast, going back to an earlier iteration of BATB, based on our participation data and the student survey.