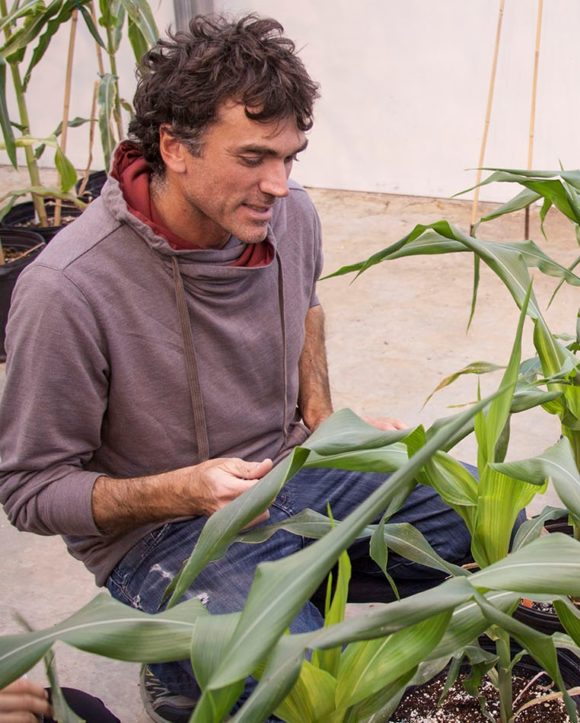 Andrea Gallavotti, associate professor in the Department of Plant Biology and the Waksman Institute of Microbiology, examining young maize plants in the greenhouse.

Andrea Gallavotti, associate professor in the Department of Plant Biology and the Waksman Institute of Microbiology, received the 2019 M. Rhoades Early-Career Maize Genetics Award from the Maize Genetics Executive Committee. The award was presented during the 61st Annual Maize Genetics Conference, held in St. Louis, Missouri, from March 14–17.

The M. Rhoades Early-Career Award is designed to recognize an individual, who has been in a permanent position for eight years or less, for significant research contribution to genetic studies in maize or other plant species.

Gallavotti was recognized for the significant contributions his lab has made in the past few years to the understanding of the molecular mechanisms regulating plant and inflorescence architecture, including new insights in the transcriptional and hormonal regulation of meristem development, and the role of the micronutrient boron in maize inflorescence formation and fertility.

“I was very happy to receive this award” said Gallavotti. “It is a significant recognition of the work my lab is doing to advance our understanding of how crop species such as maize integrate hormonal and genetic networks to adapt their growth to challenging environmental conditions”.

Gallavotti completed his graduate studies at the University of Milan in Italy, and trained as a postdoctoral researcher at the University of California San Diego and at Cold Spring Harbor Laboratory in New York. He joined the Waksman Institute of Microbiology at Rutgers in 2012.