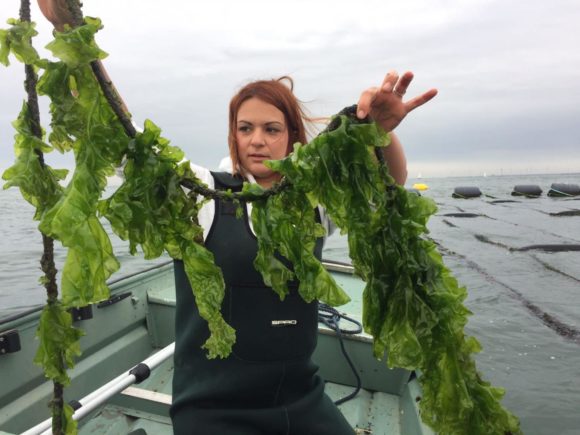 By Debashish Bhattacharya, distinguished professor, Department of Biochemistry and Microbiology

Sea lettuces in the genus Ulva are green seaweeds that appear as mats attached to intertidal rocks or floating along marine coastlines. These species “bloom” in spring and usually die off in summer.

Ulva species are widely found along tropical and temperate coasts, and several species penetrate freshwater streams and lakes. In high-nutrient conditions, green tides of Ulva often cover several hundred kilometers of coastal waters. When beached, they can smother shorelines, making these areas unusable for the public. In addition, when sea lettuce populations decay, they emit hydrogen sulfide, a poisonous gas that can harm or even kill humans or animals. Furthermore, the beached mats can suffocate shellfish or other sea life, leading to a dead zone. Floating mats of sea lettuce in harbors can interfere with fishing nets and lines, get entangled in boat propellers and negatively impact commercial shipping.

Yet sea lettuce species have valuable attributes. These fast-growing species can act as a bioremediation agent by removing excess nutrients in the water column, such as from coastal runoff. Blooms are therefore good markers of nitrate pollution. Ulva can also be used to make bioethanol and, with its fast weight-doubling time of two to three days and high carbohydrate content, may prove of future interest as petroleum sources decline. Finally, sea lettuce is eaten in several countries either raw or in stews.

There is no way to prevent sea lettuce blooms because of the unpredictable nature of nutrient availability in the world’s oceans, although reduced pollution from runoff is critical to minimize their occurrence. Within this context of known ecological and societal impacts and unknown mitigation strategies, the Ulva genome project was launched to learn what makes this seaweed “tick.” This project promised new knowledge of coastal and marine ecosystems and the evolution of green seaweeds. Comparison of Ulva species that bloom and don’t bloom also could boost understanding of the molecular mechanisms underpinning growth and reproduction in response to environmental conditions.

Olivier De Clerck at Ghent University in Belgium led this international study, and doctoral student Fatima Foflonker and I coauthored it. The outcome was exciting and opened up new avenues in sea lettuce research.

We found that the genome is comprised of about 98.5 million bases (i.e., A, C, G, T; ours is 3 billion bases) and contains 12,994 protein coding genes. Despite being multicellular, the genome did not show the typical footprints of gene family expansion associated with this increase in complexity, suggesting Ulva has made the transition in a novel way that needs to be investigated.

Ulva is fascinating because it relies on bacterial help to gain its typical blade-like form and cannot develop normally in a bacterium-free axenic culture. This observation led the research team to search for instances of bacterial gene transfer to the Ulva genome that may contribute to its biology. It is now well understood that, like the human gut microbiome, many other species also need microbes to grow and develop normally. This bioinformatic search turned up only 13 strong candidates of bacterial gene transfer, but most were expanded by gene duplication after their introduction, suggesting they play key roles in sea lettuce biology. An exceptional case is haem peroxidase, an enzyme that occurs in 36 copies and is involved in scavenging hydrogen peroxide that can result from high-light stress. The enzyme also plays a role in cell wall modification. The intertidal zone is bathed in full sunlight at low tide; therefore, the haem peroxidase gene family derived from a bacterial gene may help Ulva survive this hostile environment. The researchers also described the sulfur metabolic pathways in Ulva and the role of this seaweed in the global sulfur cycle. 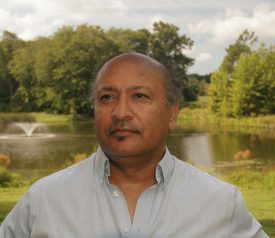 Overall, the Ulva genome laid the foundation for future studies that target specific genes for alteration using genome editing (e.g., CRISPR/Cas9) methods that could lead to increased growth for applied uses such as biofuel feedstock or biomass production, as well as approaches for using Ulva to produce engineered bioproducts. The decline in fisheries due to overuse, exacerbated by climate change, offers opportunities to develop alternative ways of generating revenue from the world’s oceans. Seaweeds can be part of this solution by offering options for biomass production for biofuel production or for animal feed because Ulva is rich in vitamins and minerals. Other, more sophisticated uses that rely on genetically engineered strains are also on the horizon and would produce high-value bioproducts such as fatty acids, soluble fibers and amino acids.

Editor’s Note: This article appeared in National Fisherman. Read the full publication on this sea lettuce study at Sustainable Fisheries.