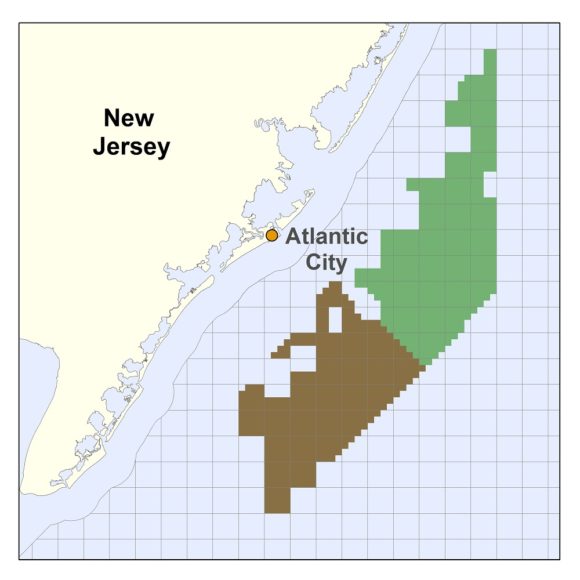 The New Jersey Wind Energy Area, where hundreds of wind turbines may eventually be built, is shaded green and brown. Image: Bureau of Ocean Energy Management, U.S. Department of the Interior.

The proposed, multimillion-dollar offshore wind farms industry may benefit from a Rutgers-led study that used sophisticated forecasting to understand sea breezes and make them a more predictable source of energy.

The behavior of offshore sea breezes, and how the ocean influences them, have largely been mysteries until now, said lead author Greg Seroka, who earned a doctorate in physical oceanography at Rutgers and is a National Oceanic and Atmospheric Administration scientist.

“We’ve developed a technique to characterize and predict sea breezes, which could be critically beneficial for offshore wind turbine construction planning, operations and maintenance – and help make wind a reliable substitute for fossil fuels,” said Seroka, who worked with Rutgers associate professor Josh Kohut, assistant professor Travis Miles and Distinguished Professor Scott Glenn in the Department of Marine and Coastal Sciences on the research.

The study, published in the Journal of Geophysical Research: Atmospheres, for the first time combined a sophisticated statistical analysis technique with a weather forecasting model to assess sea breezes near-shore and offshore.

The Rutgers-led team studied sea breezes that cross the New Jersey Wind Energy Area, a federally designated zone off Ocean, Atlantic and Cape May counties where huge wind turbines may be built.

They found that, during the summer, sea breezes often arise on hot afternoons when energy demands peak – but conditions change when winds from the southwest push warm surface water away from shore. This causes upwelling of much colder bottom water that hits beaches, chills swimmers, and causes offshore sea breezes to begin about five hours earlier than normal and become more intense. The study also found that winds blowing over coastal lands keep near-shore sea breezes from moving inland, but the land-based winds have little effect on sea breezes offshore.

Based on these findings, sea breezes offshore will be much more predictable for the offshore wind industry. Erick Fredj, a computer science professor at the Jerusalem College of Technology, and Rich Dunk, a consultant and principal meteorologist for the Rutgers Department of Marine and Coastal Sciences, contributed to the study.

Last year, New Jersey Gov. Phil Murphy issued an executive order directing the state Board of Public Utilities and other agencies to promote the development of wind energy off the New Jersey coast to meet a goal of 3,500 megawatts of electricity by 2030. Hundreds of wind turbines would be needed.

The nation’s first commercial offshore wind project – in waters off Block Island, Rhode Island – consists of five 6-megawatt wind turbines and began operating in December 2016. More than 20 offshore wind projects are in various stages of development across the United States, according to the U.S. Department of Energy.

The Rutgers researchers’ next steps include learning more about all types of sea breezes to improve their prediction.