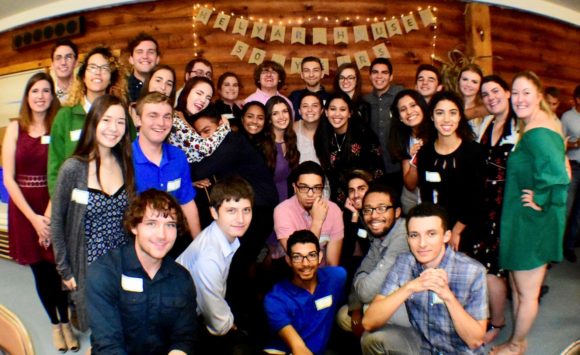 Helyar House alumni, students, faculty, staff and friends gathered on September 22 to celebrate the 50th anniversary of the opening of Helyar House, a thriving cooperative living community, open to undergraduates at the School of Environmental and Biological Sciences (SEBS). 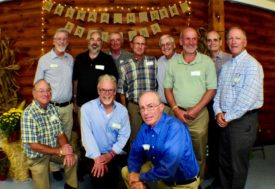 Helyar House residents from its first few years as an official Rutgers residence.

Located on the Cook Campus of Rutgers in 1968, Helyar House came into being as a unique alternative to traditional residence halls where students live together, learn together and work together. At its heart, it’s a community that provides a family environment in which its members have a much greater responsibility for self-governance. It was this ‘heart’ that was in full display at the celebration.

The day’s celebration began with a reception at Helyar House, where a new ‘Helyar House’ sign was unveiled by David Hlubik (SEBS’18), one of seven Hlubik family members to have lived there.

A dinner program encompassing everything from history and alumni updates to an advisory board report, recent Helyar activities and a scholarship campaign followed at the Middlesex County 4-H Center. 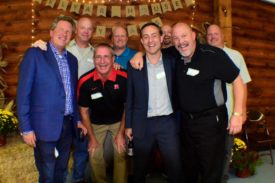 Helyar House residents from the 1980s.

Thanks were given to all of the resident counselors starting with Bruce Hamilton who provided guidance, mentoring and, when necessary, a little tough love to ensure that Helyar students were getting the most from a safe and supportive environment.

And, finally, respect was paid to the Advisory Board and all supporters, past and present. 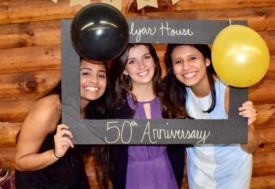 Current Helyar House resident counselor, Angela Calasso, spoke passionately about the student experience, resident counselor duties and how fortunate she felt to have the opportunity to work with such an amazing group of people. “Although I have past experience in residence life, I have never seen or felt such a strong sense of belonging as I do in Helyar House,” said Calasso. “I attribute this to the caring nature of the house and true Helyar spirit.”

Dan Rossi, who chairs the Fundraising Committee, spoke about bequests, the endowment, continuing challenges and the current Challenge Campaign which, due to the generosity of several alumni, has reached 50% of its goal even before the campaign was announced. 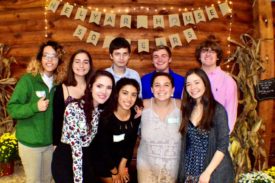 Looking to the future, Joe Ventola (GSNB’92,’08), assistant dean for Academic Programs at SEBS, spoke about the Advisory Board’s leadership, mentoring and support, the recruitment process and the community service and internship program components of the Helyar House experience.

He quoted the prominent early 20th century education philosopher, John Dewey who argued that “vital social components necessary for education to occur (include) sharing, associations, and connections to the wider community.”