New Jersey Agricultural Experiment Station
School of Environmental and Biological Sciences RUTGERS NJAES | SEBS
Newsroom Home / NJAES/RCE Department / Agriculture and Natural Resources / Scientists spent years on a plan to import this wasp to kill stinkbugs. Then it showed up on its own. 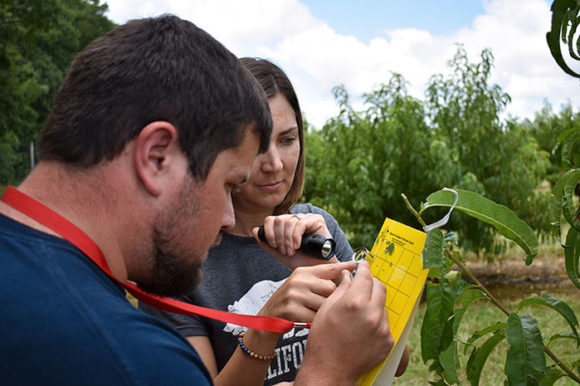 Rutgers University entomologist Anne Nielsen and graduate student Nick Avila have been tracking the samarai wasp (Trissolcus japonicas) as a possible biocontrol agent to help manage the brown marmorated stink bug (Halyomorpha halys) invasion that has been destroying crops which, in this case, are peaches in a Bridgeton, New Jersey orchard, managed by Rutgers Agricultural Research and Extension Center. 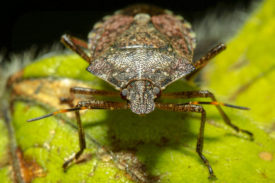 Like many invasive species the stinkbug has no major enemies in its new home to keep its population in check. Scientists from the USDA turned to the samarai wasp as a suitable biocontrol candidate. They had spent years studying the wasp in the lab to make sure that, if released, it would do its job without harming native species. But, as it turns out, the insect was already here. 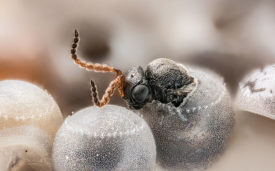 A samurai wasp emerges from the brown marmorated stinkbug egg in which it hatched. Photo: Chris Hedstrom.

So, one night last May, a team led by Rutgers Nielsen and entomologist Kevin Rice of the University of Missouri, 3600 samurai wasps were released from mesh cages into the stinkbug-infested New Jersey orchard. They strung up yellow sticky cards baited with stinkbug egg clusters among the peaches and along the adjacent forest edge. They planned to wait a few days, collect the cards, and count the wasps to see whether they had ventured into the orchard to pursue the peach-destroying bugs.

To find out more, read the article, originally published in Science.