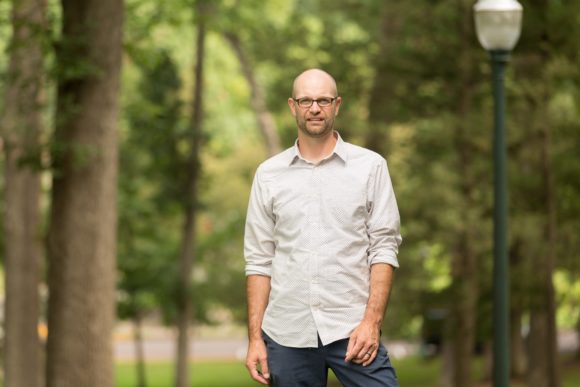 Chris Martine, the David Burpee Chair in Plant Genetics & Research and the director of the Manning Herbarium at Bucknell University is the 2018 Peter Raven Award recipient.

The American Society of Plant Taxonomists (ASPT) has selected Chris Martine, the David Burpee Chair in Plant Genetics & Research and the director of the Manning Herbarium at Bucknell University, as its 2018 Peter Raven Award recipient. The award is named for Peter Raven, eminent botanist and president emeritus of the Missouri Botanical Garden, and is presented annually to a plant systematist who has made exceptional outreach efforts to non-scientists. It is considered the society’s most prestigious recognition of achievement in international science communication.

The Peter Raven Award has been presented annually since 2000 to individuals involved in: workshops or seminars for K-12 teachers, horticultural societies, garden clubs, and schools or businesses; special events for the public; newspaper columns or op-ed articles; freelance articles in newspapers, on the web, or in magazines; taxon-oriented websites or books aimed at a lay audience; TV spots; legislative testimony; and/or defense of rare or endangered plant species.

As University of Connecticut professor emeritus Greg Anderson remarked, “It would seem that this particular award was made for Dr. Martine (or vice versa). He loves botany and he has an overwhelming passion to engage others.” Indeed, Martine’s CV highlights at least seven of the eight aforementioned activities—and then some. He embodies effective scientific communication and melds scholarship, teaching, service, and outreach so seamlessly that it is impossible to consider them independently.

Martine studied conservation ecology and evolution earning his bachelors and masters degrees at Rutgers University (CC’96; GSNB’01) and completed his PhD in Botany in 2006 at the University of Connecticut. Following six years on the faculty at SUNY Plattsburgh, he assumed his current post at Bucknell in 2012.

Martine’s nomination came from nine scientists at seven institutions. Each attested to Martine as an innovator in science communication, a tireless scholar, an exceptional teacher, and a spokesperson for botany. One supporter remarked, “Chris Martine is without argument one of the best known and well-recognized contemporary botanical teachers of the younger generation in the United States,”

“At the first professional conference I ever attended, I saw the Raven Award presented to my academic grandfather…. and thought to myself that if I was even someday in the conversation for it, I will have had a career I could be proud of,” said Martine. “So this is special… and also pretty overwhelming!”

Martine is the author of an impressive body of research regarding plant evolution and taxonomy in Australian Solanum as well as the Trees of New Jersey and the Mid-Atlantic States field guide, now in its 7th edition, among numerous other publications. His “Plants are Cool, Too!” YouTube series reaches viewers around the globe, introducing them to diverse plant life and dynamic scientists in interesting and engaging ways.

As an early adopter of utilizing the media for science communication, he masterfully generates excitement around botanical research via local radio appearances and newspaper articles. He is a dedicated advocate for plants on social media, especially through Twitter where he helped to start the #iamabotanist campaign based on an article he wrote for his Huffington Post blog.

The time and effort it takes to regularly develop content for these outlets is not trivial and has significantly impacted his colleagues. Pamela Diggle, UConn professor and editor-in-chief of the American Journal of Botany, noted, “I regularly use Chris’s ideas, gleaned from his writing and his Twitter posts, in my teaching.” His long list of popular articles, videos, tweets, press releases, creative events, and other social media interactions illustrate his local, national, and international impact as a science communicator.