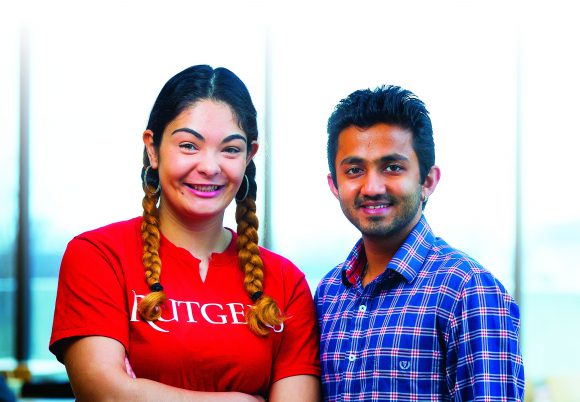 As soon as she stepped on campus during Summer Start-Up, a five-week residential program for all incoming EOF freshmen, SEBS “felt like home,” recalls animal science major Claressa Lopez. On paper, the program gave her a jump-start on the vigor of college courses. But it was the empowerment and dedication she felt from the SEBS staff that left an everlasting impression. “Somehow I knew I was in the right place,” she says. So she doubled down, choosing an animal science major and environmental and business economics minor. And she never looked back.

“There has been no greater of a support system for me than EOF, and I simply cannot imagine how college would have turned out for me had I not been an EOF student,” Lopez says. “EOF has given me more than just financial or academic assistance; it has given me passion and a deep appreciation for my education.” When times were tough, she says, she received motivation and guidance from EOF staff. Her counselors have transitioned into being her role models, friends, and family. “EOF gave me a home here at Rutgers,” she says, “and I will be eternally grateful for everything this program has given me.”

Following graduation, Lopez wants to put her animal science degree to work, possibly with a government agency. She’s also been looking into exploring opportunities in how computer science can enhance accessibility for the visually impaired. But no matter what, the future looks bright for Lopez: “Overall, I’m just really excited to jump right into the workforce, and finally begin my life.”

Siddharth Raut immigrated to the United States from India in 2014 with his family, to pursue his dream of becoming a dentist. But since his family was starting over in a new country, affording college was a challenge. His first year taking credits at a community college was extremely difficult, he remembers, working full-time hours while also balancing a full-time course load as a nutrition major (a decision he made once he realized the effects that diet can have on dental health). “It was extremely hectic, and I was unable to concentrate on my studies or my social life,” he adds. But by his second year, he was able to join the EOF family. He cut his work hours down to part-time and, ultimately, decided to enroll at SEBS.

“While researching nutrition programs in New Jersey, I figured out that SEBS has one of the best,” he says. “Moreover, the education quality, cutting-edge technology, hands-on experience, campus safety, and convenient location added to my decision.” After transferring to Rutgers, EOF continued to play a role in Raut’s journey.

“EOF has helped not only economically, but also has helped guide me to fulfill my dream,” he says. “I would credit my EOF advisers in helping me transition from an introvert to an ambivert in an extremely crucial phase of my life. It is because of my EOF advisers’ encouragement, motivation, and faith that I am on the path to achieve my goal.”

Raut has been accepted to the New York University College of Dentistry and will begin classes in the fall.