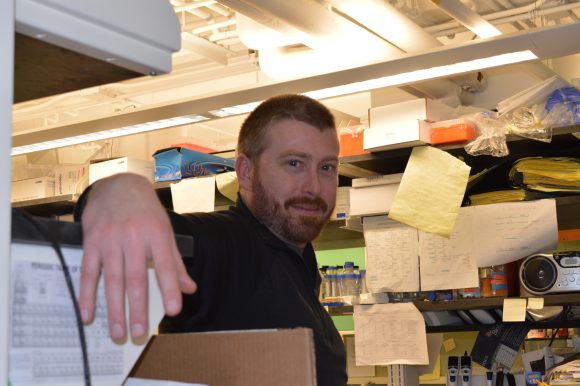 Jeff Boyd, assistant professor in the Department of Biochemistry and Microbiology.

Jeff Boyd, assistant professor in the Department of Biochemistry and Microbiology, won a prestigious early CAREER award of $1,033,667 from the National Science Foundation (NSF) for his project, “Iron-sulfur cluster assembly in Bacillus subtilis.” The CAREER award is among the NSF’s “most prestigious awards in support of early-career faculty who have the potential to serve as academic role models in research and education and to lead advances in the mission of their department or organization.”

Boyd’s five-year award will examine how the bacterium Bacillus subtilis builds inorganic cofactors called iron-sulfur (FeS) clusters and maintains proteins that require FeS clusters. In addition, he will use his research program as a platform to educate postdoctoral scholars, undergraduate and graduate students as well as the public.

Iron (Fe) is an essential nutrient for nearly all organisms and is acquired from the environment and transported into cells using specific uptake systems. A large proportion of internalized Fe is housed in inorganic prosthetic groups called iron-sulfur (FeS) clusters. These cofactors are composed of Fe and sulfur (S) atoms. Because free Fe and S are toxic to cells, elaborate protein systems are used to build these cofactors. Once they are built, the FeS clusters must be trafficked to, and inserted into, proteins that require them for function. The proteins that utilize FeS clusters have a wide variety of roles and there are few aspects of metabolism that are not impacted by Fe-S cluster proteins.

The metabolisms of most, if not nearly all, organisms are reliant on FeS protein function, and failure to properly maturate FeS proteins results in widespread metabolic disorders and often cell death. Boyd’s funded project combines classic and molecular genetics and biochemistry with state-of-the-art, next-generation technologies and computational biology to gain a better understanding how organisms maturate and maintain FeS proteins. The results of these studies will impact the understanding of iron-dependent processes from bacteria to humans.