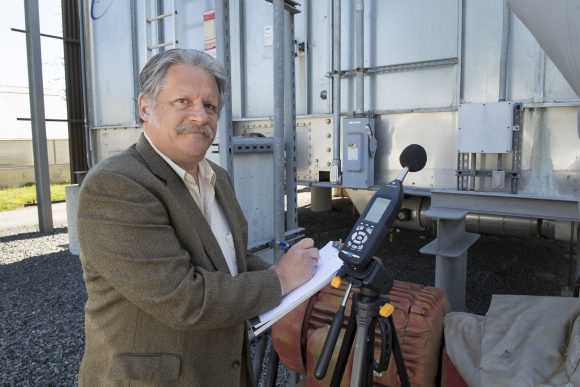 “People don’t consider noise a real environmental issue,” said Zwerling, director of the Rutgers Noise Technical Assistance Center. “But I consider what I do to be the ultimate embodiment of the mission of a land-grant university – taking science and putting it in the hands of people who will improve the quality of life for hundreds of thousands of people across this state and the world.”

Noise – unwanted or disturbing sound – in some ways can be as noxious as smoke. Noise disrupts sleep, conversations and quality of life, and it’s linked to stress-related illnesses, high blood pressure, hearing loss and lost productivity, the U.S. Environmental Protection Agency says.

Since the 1970s, the Rutgers noise center, which is in the Department of Environmental Sciences within the School of Environmental and Biological Sciences, has provided training and assistance to local officials and others in New Jersey, nationwide and abroad. It is the last center formerly funded by the EPA Office of Noise Abatement and Control, which closed in the early 1980s.

“It’s very unfortunate that the EPA dropped its interest in regulating noise and noise sources,” Zwerling said. “The vast majority of Americans are unprotected from noise, and products like jack hammers are being manufactured with unregulated noise. That’s detrimental to the health and welfare of Americans and means that some of our products can’t be sold in Europe, which regulates noise emissions.”

The Rutgers noise center has trained thousands of investigators how to measure sound levels to check compliance with local or state noise codes. And for years, the N. J. Department of Environmental Protection has contracted with the center to provide training. State law requires all noise enforcement officers in New Jersey to take Rutgers’ three-day certification course on community noise enforcement. It’s taught by Zwerling and offered quarterly; a refresher course is required every two years.

“Noise has been an issue since Roman times, when they banned chariots on cobblestone streets at night,” Zwerling said. “It’s a major quality of life issue. If a tire repair shop torched its tires to get rid of them at night and neighbors were choking on black, acrid smoke invading their homes, the shop owner would be brought out in shackles. However, if the same shop refuses to close their bay doors when using pneumatic tools, allowing disruptive levels of noise to enter the same residences, it is often shrugged off in jurisdictions with no noise program.”