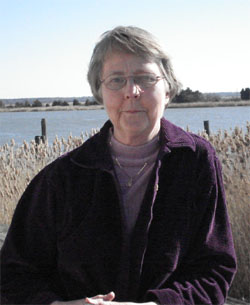 Susan Elizabeth Ford, age 75, passed away on December 5, 2017 in Williamsburg, Va. A renowned researcher and mentor, Ford received her undergraduate degree in zoology from Rutgers Cook College in 1978 and a doctorate degree in zoology from Duke University in 1984. During her career, Ford held positions at Duke University; School of Veterinary Medicine at University of Pennsylvania; and was a research professor, Rutgers Department of Marine and Coastal Sciences, working at the Haskin Shellfish Research Laboratory (HSRL). After her retirement from Rutgers, she was an adjunct professor at the School of Marine Science, Virginia Institute of Marine Science/College of William and Mary. Ford became professor emeritus at Rutgers in 2003 and maintained an office and an active research program at HSRL until moving back to Williamsburg in 2013 where she continued to collaborate with many colleagues on manuscripts, reports, student committees, and funded research.

Ford was a well-known and internationally respected shellfish biologist who received several scientific awards including the Thurlow C. Nelson Award, National Shellfisheries Association; Italian National Research Council short-term visiting Fellowship; The David Wallace Award, The National Shell-fisheries Association; and Honored Life Member Award, National Shellfisheries Association. She served on numerous scientific boards and authored nearly 100 peer-reviewed publications that have been cited more than 3,000 times, demonstrating the impact of her work. Her peers and colleagues described her as a selfless scholar and mentor, demanding, yet kind and helpful, a model of decorum, smart and generous, a treasured colleague.

Ford was fondly remembered by members of the HSRL who posted this tribute:

“The Haskin Shellfish Research Laboratory lost a beloved faculty member, researcher, mentor, colleague and friend on December 5, 2017 when Susan E. Ford lost a valiant battle with pancreatic cancer. Susan began her professional career working as a lab technician under Harold (Doc) Haskin in 1966. She left the lab in 1978, returning several years later with a doctorate in hand. She joined the faculty and was tenured in 1990. She “retired” in 2002, but retained her office at the lab as emeritus professor until 2014 and continued working with faculty, staff and students until her death.

Susan left an indelible mark on many at the Haskin Shellfish Research Laboratory, at Rutgers and beyond. She was a leading shellfish pathologist, garnering recognition from colleagues, regulators and industry leaders around the world. Her steadfast commitment to excellence in science, with a pleasant touch of camaraderie, guided and benefited many. In 2012, the National Shellfisheries Association made her an Honored Life Member and detailed her career in an article in the Journal of Shellfish Research. She leaves behind a legacy of professional accomplishments that will serve the field for decades to come. Susan was as a strong supporter of students and their development into critical thinkers, whether or not they continued to pursue careers in shellfish pathology or even in science. For those who had the opportunity to know her, it is her friendship, guidance and mentoring that will be missed most.”