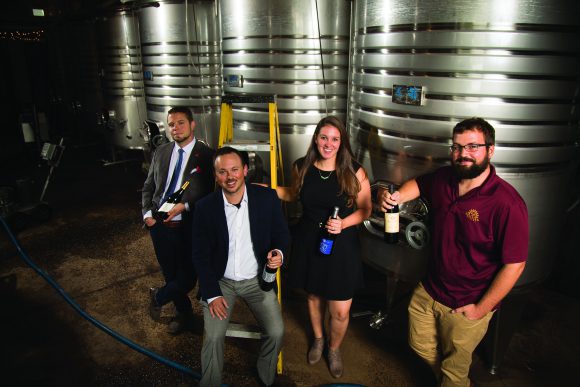 To draw attention to high-quality Jersey wines and elevate the state’s stature to rival those of East Coast wine destinations like the Finger Lakes.

Here’s how these young alumni are transforming New Jersey’s reputation one bottle at a time. 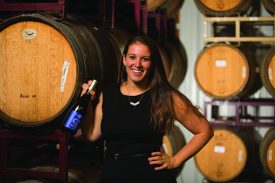 New Jersey wines haven’t always enjoyed the best standing in the wine industry. In fact, if you ask Justen Beneduce Hiles SEBS’08, the industry has some accidental roots: “When it started out years and years ago, it was mainly fruit farmers who had extra fruit and turned it into wine. It may not have even been grapes. It might have been made from pears or apples, and it yielded very, very sweet wine.” She’s the first to admit that this type of wine definitely has a place in the market: it tastes good, and it’s inexpensive. But it’s not all New Jersey can do. Far from it.

Pittstown-based Beneduce Vineyards focuses on a sustainable farming method that includes pulling leaves by hand, using fewer chemicals, employing biodiversity, and other initiatives. The result is fine varieties, and the winery is known for its Chardonnay, Riesling, Gewürztraminer, Pinot Noir, Cabernet Franc, and an Austrian red named Blaufränkisch. 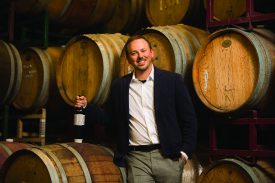 Heritage Winery—which previously grew peaches and apples for five generations—made the transition to wine in 1999. Since then, they’ve been awarded New Jersey’s “Winery of the Year” by the Garden State Wine Growers Association in 2011, 2014, and 2015. And, their efforts have been recognized by The Wine Advocate, which recently awarded the winery’s Vintage Brut a 90 point rating, indicating outstanding complexity and character.

“It’s the first time ever that a New Jersey wine was rated 90 points or higher, so this broke a glass ceiling,”says Rich Heritage SEBS’08, of his family farm’s achievement. “There are so many wine professionals in New Jersey, and if you would have told them 10 years ago that someone would get 90 points for New Jersey wine grown from New Jersey soil, they would have said no way. So this is a win for the entire New Jersey wine industry.” 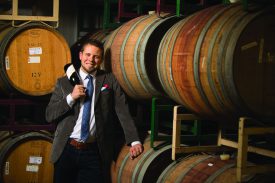 Unionville’s general manager is John Cifelli SEBS’09, also executive director of the Winemakers Co-op, and he sees these ratings as just one step in bringing to light the amazing things happening on the New Jersey wine scene: “This is a watershed moment for us as far as legitimacy in the state. New Jersey always has had a chip on its shoulder, so it’s great to put a stake in the ground and say that we’re making great wine here.”

At the forefront of this movement are SEBS graduates, who banded together to raise awareness of their own farms as well as the burgeoning New Jersey wine industry.

Earning top scores from internationally renowned publications is just the beginning. For these alumni, elevating the reputation of New Jersey wines is a ground-up operation that starts with simply getting the word out to local wine lovers.

To draw people to their farm, Beneduce Hiles and her family invested in making their property a true destination. When they opened their winery’s doors in 2012, over 800 people attended the grand opening event. Since then, instead of advertising, they put money into the experience: a stone fire pit and patio, welcoming landscaping, a stage for live music (every weekend, by the way), and a greenhouse boasting fruit trees like lemon and fig trees for a wintertime escape. 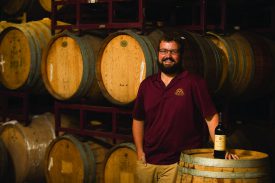 At Bellview Winery, where the Quarella family has been farming for a century, locals are invited to events filled with music, food, and wine. The farm is also the site of a big Italian festival, and other fun events like trivia nights, says Scott Quarella SEBS’13.

The Winemakers Co-op is yet another initiative that gets the word out. Founded by Beneduce Vineyards, Heritage Winery, Unionville Vineyards, and Working Dog Winery—all but the last boasting a Rutgers alumni connection—the co-op brings together winemakers focused on dry premium wines, made from classically European grapes grown in New Jersey soil. Together they share best practices and publicize innovators in the state. They also host two tasting events each year that are open to the public.

“It’s a grassroots movement to get the word out,” explains Heritage. “Pretty much all wine industries start with simple and easy-drinking wines, and they organically grow towards making finer and more prestigious wines. We would rather not wait 20 years for that to happen. So we’re pouring a little fuel on that fire, to get people interested in fine wine that comes from the state, rather than out of the state.”

An elite wine economy in New Jersey is great for wine lovers, but it’s also lucrative for farmers.

Quarella explains that his father didn’t think his three sons would be interested in taking over the family vegetable growing business that had been in production for 80 years. Competition was high, shipping was expensive, and the lifestyle was hard. So, in 2000, when Quarella was 10 years old, his father started growing grapes. “He thought it would be more enjoyable to run a winery than a vegetable farm,” Quarella says. “I see a lot of younger people interested in this; they think it’s such a cool job. But it’s also an agricultural product that’s selling enough to make a career.”

Beneduce Hiles tells a similar story. The family’s 51-acre farm was initially used to supply its garden center, but there were about 20 acres not being used. She and her brother got together, commissioned some climate research and soil testing, and found out that the site was well suited for grapes. Winemaking wasn’t even on their radar. “But when we heard that grapes were well suited, we thought it was much more interesting than growing soybean or corn,” she says.

“For millennials, farming wine is a lot cooler than farming other crops—nothing against the other crops,” agrees Heritage. “We need new fresh blood in Jersey agriculture. And this will get people motivated to get an education, grow grapes, preserve land, and make wine.” Heritage’s farm, for example, had reached a crossroads as a struggling peach farm. By turning it into a winery, the family was able to preserve over 150 acres of New Jersey farmland.

It’s all about tapping into people’s interest in local food, and showing them that New Jersey can offer products that are just as good as those found elsewhere. “New Jersey hasn’t had the greatest reputation thanks to shows like Jersey Shore,” says Quarella. “People don’t think that great beer, cheese, or wine can come from our state. But these industries are all making great products and proving people wrong. Wine is an industry that’s on the rise in New Jersey with unlimited potential.” 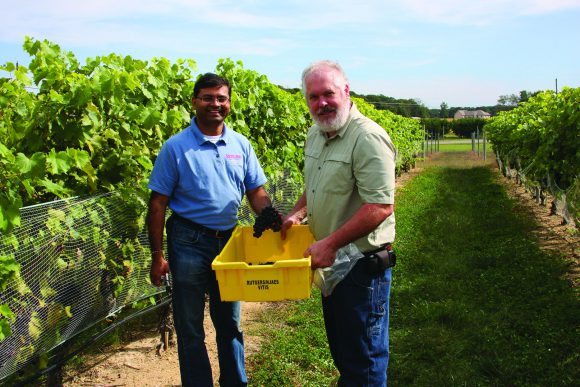 Here are just a few ways how:

At the New Jersey Center for Wine Research and Education’s website, interactive tools allow prospective grape growers to determine the suitability of their land or any piece of land in the state. An interactive map makes available all kinds of data from precipitation by month to winter temperatures, number of growing days, first and last frost, and other insights, so growers can make the best decisions for their grapes.

According to the Center’s director, Dan Ward, since grape growing is such a new area for New Jersey, there is still so much to learn. Research questions include disease, pest, and weed control issues, as well as how well certain grape varieties grow and perform here, and how to make the best wine from them.

Extension agent Hemant Gohil leads a program for aspiring and beginning grape growers that covers challenges andsolutions, how to establish a vineyard, what materials to use, which clones will work locally, and more. “Wine grapes go into the ground and they’re there for 40 years,” he says. “There are so many decisions in the early years that will have an impact for a long time to come.” Beginners can even go to Grape Camp, where they’ll experience an on-farm demonstration and learn top growing practices firsthand.

One-on-one site visits include soil testing and site-specific consulting. In one year, Gohil estimates that NJAES services up to 20 vineyards, often visiting two or three times to one farm to check progress.

Though much of NJAES’ outreach is centered on grape growing, the Annual Wine Workshop is for winemakers. Participants walk away with information about barrels and yeast, fermentation, and aging. Plus, they do tastings with New Jersey winemakers, who are available to share best practices and information.

Editors Note: this article originally appeared in the Fall 2017 edition of Explorations.