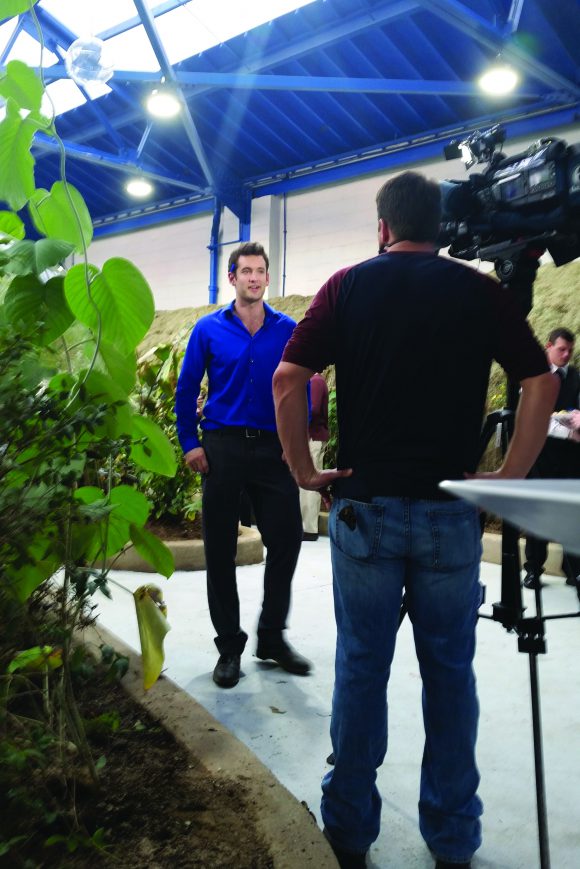 Explorations, the bi-annual magazine of the School of Environmental and Biological Sciences, features profiles of recent graduates who have launched successful careers and may well be on their way to making headlines for their work. The editors posed a series of questions about how their Rutgers experience influenced their lives. Here is one such profile that appears in the Spring 2017 issue.

I am the CEO of Plan A, Inc., a firm that designs and oversees the creation of science museums and exhibits, which I started in February 2016. Plan A created Insectarium and Butterfly Pavilion, Inc., a new science museum in Philadelphia, and I am the CEO there as well.

Q: How did Rutgers contribute to your success in your career?

A: I started my first companies when I was an undergrad at Rutgers. I got some friends together and created an organization called The Hands, which ran events and helped all of us pay our rent. Later when I was running several graduate student organizations, I learned new ways to apply for funding, manage budgets, and coordinate cooperative group projects.

Q: What challenges did you face?

A: Due to complicated circumstances, I needed to start Plan A, Inc. four months before I defended my Ph.D. so it ended up being a very interesting time. Early mornings were for interviewing potential Plan A interns, late mornings were spent finishing up my research data analysis, afternoons were for writing my dissertation, and by evening I was working on design contracts and insurance policies.

Q: Does a pivotal, “ah-ha” moment come to mind when you look back on your time at Rutgers?

A: I was meeting with some potential investors to go over a loan I badly needed early on in July 2016, and I was really nervous. Then I remembered sitting in the Blake Hall library looking at my [Ph.D.] committee members when I was taking my qualifying exam and being really, really, really nervous. Suddenly, the investor meeting just didn’t seem nearly as scary. And then later when I didn’t get the loan, I thought back to my research projects. They never went according to plan or worked on the first try. So I didn’t get too upset about the loan; I just kept working and figured out a way around it.

Q: What memories of college do you hold dear?

A: I spent three summers hanging out in peach orchards conducting 24-hour studies on stink bug activity, and I had large teams of interns and undergraduate researchers helping me. At night after the university staff would leave the research farms, it was just us there. Between the research trials (which were every three hours), we built water slides, catapults, and zip lines, and played massive numbers of games and pranks and, indeed, participated in all the shenanigans you can fathom. I can’t think of a more enjoyable way to have gotten my degree.

Q: What is your favorite motivational quote?

Q: What is your next step? What can we look forward to?

A: I have about eight months of work left on the museum in Philadelphia before I move on from there. Eventually, I would like to finish planning a science theme park I call The Hive, but for right now I think New York City is the next move. I recently started a non-profit called Operation Monarch that I want to get moving, too.

Q: What gives you the most pride about being a Rutgers graduate?

A: Rutgers has made it very easy to connect with the alumni in a myriad of different industries. I really like being part of a massive, well-respected network.