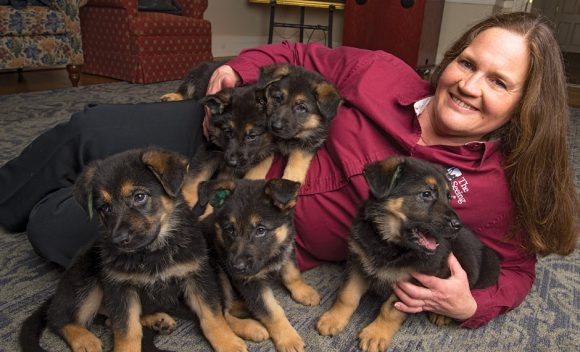 Alumna Peggy Gibbon is the director of canine development at The Seeing Eye, the well-regarded guide-dog school where she has worked for 30 years and has “the best job in the world.”

Peggy Gibbon is used to hearing that she has the best job in the world. “A lot of people are dog lovers, so I have heard that a few times,” she says from her office at The Seeing Eye, a guide dog school in Morristown, New Jersey. Gibbon (CC’82) is the director of canine development at the prestigious school, where she oversees canine genetics, early enrichment for newborn puppies, the puppy development division, adoptions, and more.

She is the puppy maestro—and a highly successful one. Over the years, she has paired thousands of visually impaired people in New Jersey, New York, and beyond with the dogs that enable their independence, vastly improving their lives. “I call it rewarding but challenging,” she says. “Anyone who has raised a puppy knows it’s not easy.” And the stakes are dizzyingly high: “These dogs are workers, tasked with ensuring the safety of a human being.” Breeds that The Seeing Eye raises include German shepherds, Labrador retrievers, golden retrievers, and Labrador/golden crosses. They are born on a 330-acre breeding station in Chester, New Jersey, and socialization begins almost immediately. At eight weeks they go to the homes of volunteer puppy raisers, including those from the student-run Rutgers University Seeing Eye Puppy Raising Club, who teach them basic manners and commands and expose them to experiences like car rides and shopping trips. The puppies return to The Seeing Eye at 14 or 15 months, where they begin formal guide dog training. People also learn at The Seeing Eye. Before a visually impaired client is allowed to take home a dog, he or she must graduate from a rigorous training program.

Gibbon joined The Seeing Eye as an apprentice instructor in 1983, just after earning her bachelor of science in animal science. “At first they didn’t have an opening. They told me, ‘A lot of people want to do this. If you’re really interested, keep coming back.’” She did. Within a year, after a brief stint working for a veterinarian, she was hired full time. Thirty four years of steady promotions and thousands of successful dog placements later, she still can’t imagine a boring day at the office. Some dogs see a bird or a squirrel and go berserk: not every puppy makes it as a guide dog.

“They become highly distracted, and that’s something they have to learn not to do if they’re going to be workers,” Gibbon says. Others lack sufficient confidence: “A dog has to be bold enough to make a decision for their human partner.” If they don’t develop the self-assuredness to make such decisions during their formal training, which can last four to five months, they won’t make it through the program and become workers.

One of the things Gibbon likes best about The Seeing Eye is that, unlike other schools, it allows visually impaired graduates to own their dogs. “It shows a certain level of respect for the individual if they own their dog. They can call us if they have questions or need advice, but they control the decision making, and they don’t have to worry about someone taking their dog away from them,” she says.

Gibbon admits that sometimes it would feel pretty good not to let her dogs go in the first place, though: “You know it’s your job to send them off. But it’s always hard.”