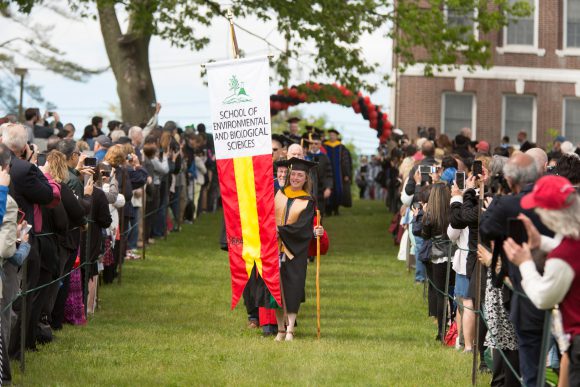 On May 15, the School of Environmental and Biological Sciences’ Class of 2017 was awarded degrees and basked in the pride of faculty and staff of the Cook Campus at the Convocation held at the iconic Passion Puddle. On a blustery day, the students were joined by an enormous crowd of family and friends to celebrate this special annual occasion. 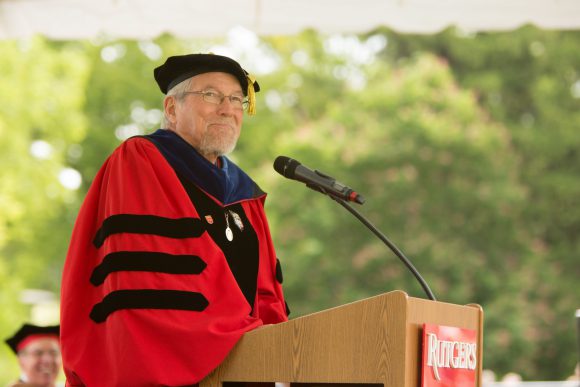 Dean of Academic Programs Rick Ludescher served as the Master of Ceremonies while Executive Dean Bob Goodman addressed the Class of 2017, which numbered over 750 graduates.

An exuberant and inspiring address was given by Class of 2017 Representative Samia Sohail, a Biological Sciences major and an Endocrine Physiology and Health Science minor. Sohail urged the students to focus not only on their individual ambitions but on their brothers and sisters around the world and the state of humanity as a whole. 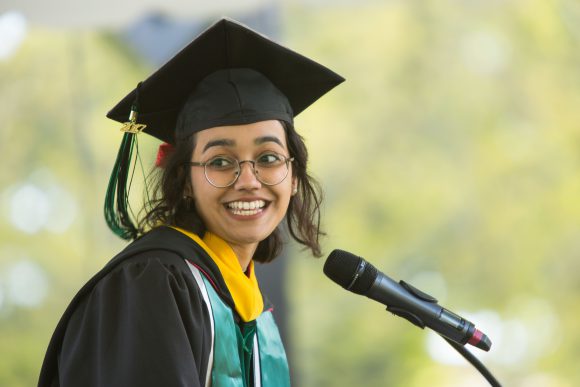 She charged them to stay curious. “I hope our passion and thirst for knowledge remain unquenchable throughout our lives and that we never stop seeking and demanding THE TRUTH. Challenge racism, misogyny, hatred, and corruption. We are all personally responsible for becoming more ethical than the society we inherited.”

Sohail’s mortar board said “The dream is free but the hustle is sold separately.” She noted that “there is a lot we still have to accomplish” and that they would have to work hard.

“These past four years, I’ve seen a glimpse of how revolutionary we can be,” Sohail said in closing. “But as we leave here today, let’s work to create a permanent reality that’s revolutionary!”

View images of 2017 Convocation on the SEBS Facebook album.