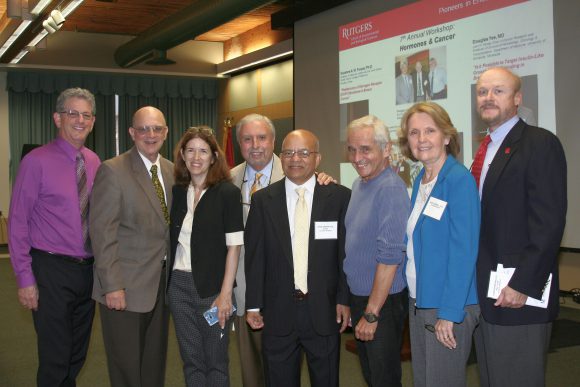 The ninth annual Pioneers in Endocrinology Workshop was held at Rutgers on September 14, 2016 at the Busch Campus Center. It was sponsored by the Rutgers Endocrine Program; Rutgers-RWJMS Division of Endocrinology, Metabolism and Nutrition; Department of Animal Sciences at the Rutgers School of Environmental and Biological Sciences; Rutgers NJAES Cooperative Extension; and the New Jersey Obesity Group. 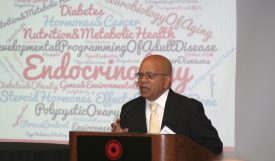 Dipak Sarkar, director of the Rutgers Endocrine Program and professor in the Department of Animal Sciences, welcomed over 115 participants and opening remarks were presented by senior vice president for Research and Economic Development, Christopher J. Malloy. 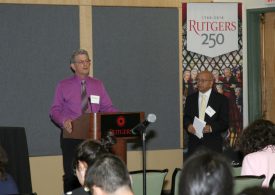 Following the opening remarks, Larry Katz, Professor and Director of the Rutgers Cooperative Extension program introduced the first speaker, Donald W. Pfaff, Ph.D.  Pfaff is professor and head of the Laboratory of Neurobiology and Behavior at The Rockefeller University.  He is a neuroscientist who uses neuroanatomical, neurochemical and neurophysiological methods to study the cellular mechanisms by which the brain controls behavior.

His presentation, titled “Hormone Actions in Brain Related to the Large Sex Difference in Autism,” emphasized how social deficits associated with autism arise from a “well-practiced social avoidance response”. His data revealed a possible connection between intrauterine early stress and impaired neurodevelopment of the offspring mediated by the contactin-associated protein-like 2 (CNTNAP2) gene. A question-and-answer session following this talk was led by Carol Bagnell, Professor in the Department of Animal Sciences. 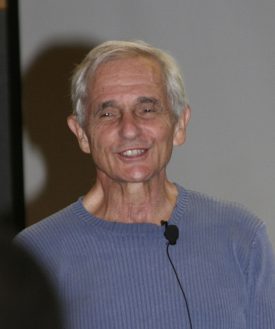 Sue Shapses, professor in the Department of Nutritional Sciences and director of the New Jersey Obesity Group, introduced the second speaker, Stavros C. Manolagas, M.D., Ph.D., is MACP clinical scholar chair in Internal Medicine and distinguished professor of medicine and professor of orthopedics at the University of Arkansas for Medical Sciences (UAMS).

Manolagas’ presentation was titled “The Role of Sex Steroids in Skeletal Health and Disease.” His talk emphasized that age-related mechanisms such as oxidative stress, declining autophagy, cell senescence, inflammation, and ER stress which affect other organs also negatively affect bone. The clinical manifestations of osteoporosis occur even before estrogen deficiency in women or androgen decline in men, such that bone loss begins slowly much earlier in life and contributes to the loss of bone architectural integrity and strength. Following this talk, Louis Amorosa, Director of Endocrine Division, Rutgers-RWJ Medical School, led a question-and-answer session, which was followed by a luncheon. 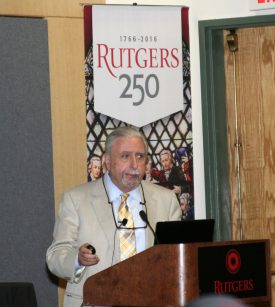 The afternoon featured 48 posters reporting state-of-the-art endocrine research being conducted at Rutgers and other universities.

Industry partners Bioactives American Corporation, ThermoFisher Scientific and EMD Millipore Sigma were represented at the workshop and hosted display booths by the Fireside Lounge at the Busch Campus Center. Their financial contributions to the workshop were much appreciated, especially by the student attendees who enjoyed a free lunch.

During the afternoon session, faculty members also participated in a roundtable meeting with the two workshop speakers.