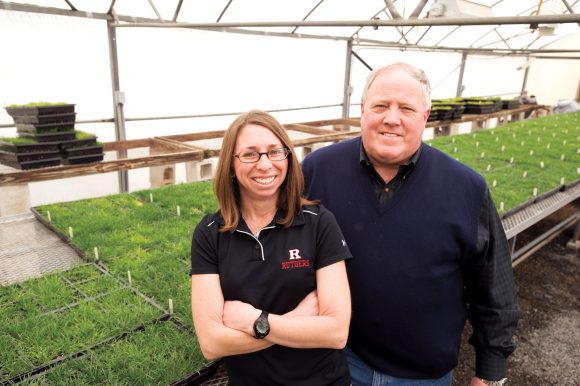 William A. Meyer and Stacy Bonos (GSNB’97) are Rutgers researchers who are working to develop an ideal form of turfgrass.

Clean water is a valuable limited resource and water conservation is a priority in arid and drought-stricken regions. While people require clean water for survival, some plants are able to grow without perfectly clean water, leaving more potable water for drinking. One water conservation strategy is to use treated wastewater, which contains salt left over from the cleaning process, to irrigate large areas of turfgrass, which include athletic fields and golf courses. In arid regions, golf courses alone use approximately 750 billion gallons of water annually.

As most plants cannot tolerate high levels of salt, plant breeders are trying to breed plants that are more salt-tolerant. This would conserve clean water while maintaining healthy turf.

Associate professor Stacy Bonos (GSNB’97) in the Department of Plant Biology and Pathology and members of her lab are conducting a series of experiments to study salt tolerance in perennial ryegrass (Lolium perenne L.). Perennial ryegrass is a popular wear-tolerant turfgrass used in mixtures and as a popular seed to repair disturbed and weak turf areas. Bonos’ team has found that tolerance is strongly controlled by additive genetic effects rather than environmental effects. This knowledge is good news for breeders, making it easier to breed for salt tolerance. 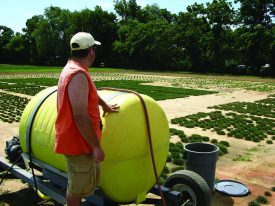 Further experiments conducted by the team determined how genetic factors pass to the plant’s offspring. For example, two plants may combine to pass on tolerance, but one of those parents may not pass on that same strong influence in a different cross. This gives breeders an estimate of which parents are better to use in crosses and confirms what type of gene effects are influencing salinity tolerance. The results show that when it comes to salt tolerance, additive gene effects are more important.

Bonos and her team are working to concentrate these genes for salt tolerance so turfgrass can use more wastewater and less fresh water. They hope to eventually breed a marketable grass with high tolerance. This has the biggest implication for golf courses, because there are some courses now that are required to water their grasses with wastewater instead of potable water.