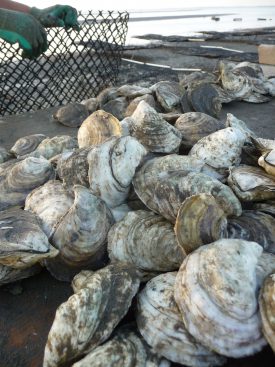 The oyster breeding program at Rutgers University has conducted over a century of cutting-edge scientific research to overcome challenges to the industry from the devastating effects of over-fishing, diseases, and climate change. Professor Ximing Guo explains his research and vision.

Throughout Rutgers’ yearlong celebration of its 250th anniversary (November 2015 to November 2016), NJAES each month highlights one of its all-star varieties developed by its breeding program. Decades of research contribute to superior varieties of plants and shellfish, benefitting and sustaining the future of agriculture (which includes aquaculture) in a number of ways. August 2016 celebrates the NJAES oyster breeding program, which dates back to 1901 when Julius Nelson founded the Rutgers Oyster Investigation Laboratory, which became what we now know as the Haskin Shellfish Research Laboratory—the most productive and prolific oyster research center in the nation. 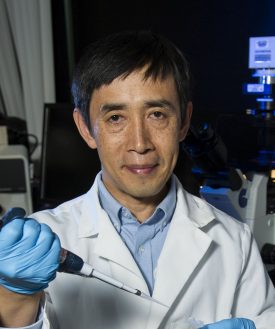 The Rutgers 250 All-Star Variety for August is the ‘triploid’ oyster! Normal oysters contain two sets of chromosomes, hence diploid, whereas triploid oyster contain three sets of chromosomes. As professor and shellfish geneticist Ximing Guo states, “Triploid oysters have several advantages. One, they grow faster. They’re sterile, so they don’t reproduce. If they don’t reproduce, they’re good for the environment, because they don’t interbreed with the wild populations. If they’re sterile, they also have a better meat quality in the summer.” This is why, when the NJAES oyster breeding program at Rutgers developed a method to produce tetraploid oysters, which can be crossed with normal diploid oyster for production of highly desirable triploid oysters, it created several advantages for oyster growers around the world and thus, has helped to sustain the aquaculture industry. Now, triploid oysters developed at Rutgers are a popular variety in the U.S., France, Australia, and China.

Other varieties released by the oyster breeding program include Haskin CROSBreed® and Haskin NEH®, part of the Northeastern High Survival Resistant Line. These varieties, primarily Haskin NEH®, are available to oyster fishermen, who then sell the full-grown oysters commercially. As Haskin Shellfish Research Laboratory director and associate professor Dave Bushek explains, “We sell Rutgers oysters as ‘seed’ (baby oysters) and we license our broodstock to hatcheries for commercialization. We do not produce market oysters for sale to the public. As a result, what the growers produce is often marketed under their trade name. Many list the source of their oysters as disease resistant stock or ‘triploid’ oysters from Rutgers.” 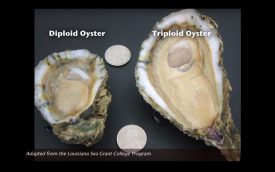 Video: Ximing Guo – Genetic Advancement of Aquaculture. By producing a tetraploid oyster, the Rutgers NJAES oyster breeding program can cross with a diploid oyster to create only triploid oysters. This accomplishment contributes to the success of oyster hatcheries worldwide. (Click on the picture to watch the video.)

This means that restaurants and distributors from which you purchase oysters likely are selling a Rutgers product and you may not even realize it! If they’re ‘triploid’ oysters, they were developed by the NJAES oyster breeding program.

Thanks to research being conducted by the oyster breeding program at NJAES Haskin Shellfish Research Laboratory, oyster industries around the world are able to receive the support they need to sustain their businesses. Impacts of global environmental change on aquaculture is unpredictable and research conducted by the NJAES oyster breeding program provides hope for the future of oyster farming.

History: Rutgers Through the Years – Father-Son Pioneers of Oyster Cultivation