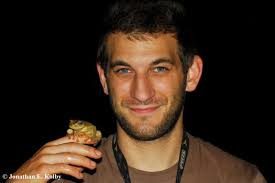 When he was a young boy, Jonathan Kolby spent most of his free hours outdoors “running around in the woods, catching frogs and turtles.” Not much has changed since then, although now he spends his time in the wetlands of such places as Honduras, Nicaragua, Australia and Kenya, studying the diseases that are threatening the very existence of amphibians worldwide.

Growing up in Union, New Jersey, Jonathan got an early start on his work with amphibians. At age 15, he had the opportunity to join James Lazell of The Conservation Agency, a Rhode Island-based 501(c)(3), on an expedition to survey reptile and amphibian biodiversity in Hong Kong and China. That experience cemented his interest and directed his future career in research.

He chose Rutgers and the George H. Cook Campus for college because “it is in a really green spot in New Jersey and offered the courses in biological sciences that would advance my personal interest in amphibians,” he says.

After graduating in 2003 with a degree in biological sciences, he went to work for the U.S. Fish and Wildlife Service and came across the National Geographic Young Explorers program, which awards scientists between the ages of 18 and 25 grants of up to $5,000 for field research around the globe. Successful in his grant application, Jonathan used the funds to travel to Honduras to determine whether endangered frogs were infected by the pathogenic chytrid fungus (Batrachochytrium dendrobatidis or Bd), a scourge that is wiping out amphibian populations around the globe.

His research in Honduras is aimed at understanding how the disease is spread, if there are amphibian populations that have developed a resistance and, ultimately, to help the species rebound.

“The biggest problem with chytrid,” he says, “is that once it gets into a habitat, we have no way to safely remove it. Veterinary medicines can cure the disease in captivity, but animals generally remain vulnerable to re-exposure if returned to the wild.”

“At my study site in Honduras, this pathogen persists in the water and appears primarily to kill juvenile frogs before they reach maturity. The adult frogs that are fortunate enough to survive the transition from juvenile to adult might possess some degree of innate resistance to the fungus,” he adds.

His group in Honduras is building a rescue facility where juvenile frogs from Cusuco can be treated for chytrid infection and raised in a safe environment until they are adults. Then they will be re-introduced to the rainforest where they can breed naturally and help replenish their populations. “We know we can never get rid of the disease, but if we can help populations survive as natural selection continues, these endangered frogs might have a chance to develop resistance to this disease over time,” he says. 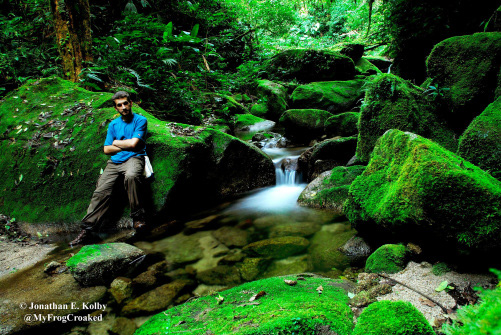 Jonathan believes that in a way, amphibians are the “canary in the coal mine. Bats and now snakes are also suffering from emerging fungal diseases, but it appears that the frogs were the first group of animals to be severely impacted on a global scale.” Another challenge is determining “how much of the problem is a result of human activity, such as trade. To what extent is this our mess and our responsibility and how do we fix it?”

Are frogs that important that they deserve these enormous efforts? Ask Jonathan that question and he bristles slightly, then politely explains: “Frogs have a number of important roles in the ecosystem. Many tadpoles are herbivores and their grazing of plant material helps maintain water quality, and that matters in areas that don’t have water purification systems.”

“Frogs also eat a lot of insects, which can reduce the risk of diseases such as malaria and dengue. And they are an important source of food for many other animals – eliminate them and you endanger larger predatory species.”

Looking at it from a precautionary perspective, he asks aloud whether humankind should put itself in the position of deciding which species should or shouldn’t go extinct and which “deserve” to survive. “Once you start making those decisions, it’s a slippery slope. And we don’t know the consequences.”

Not all of Jonathan’s work is a race against time. In an interview on the National Geographic website, he tells of an experience in the rainforest of Cusuco National Park in Honduras  a few years ago when “I found an unusual frog one night that slipped through my fingers as I attempted to catch it. I was unable to identify which species it was, but I had already seen most species in the region and had never seen anything like this one before.”

“It was my last night at that site, and I had to wait a year before being able to return to that location to conduct a second season of field work. It was a cold, rainy night, and I could not believe my eyes the moment I saw what appeared to be the same frog, literally sitting on the same rock where I failed to catch it the year before.”

“This time I was successful, and the frog was positively identified as Craugastor milesi, a species that had not been seen for nearly 25 years and was declared to be extinct.”

“In the midst of my project studying a disease that is causing amphibians to go extinct, it was a very rewarding moment to find this special frog and learn that his species had been hanging onto existence.”

These days, Jonathan is working on his Ph.D. at James Cook (a coincidence? you decide) University in Queensland, Australia. He lives part of the year in Seattle and still travels to Central America. In between his travel, research and writing he applies for and receives grants to continue his conservation work and recently launched a crowdfunding campaign on Indiegogo called “Save Frogs from Extinction.”

In many ways he credits his Rutgers education for his curiosity and drive. “One of my favorite professors was George Clark [with the Department of Human Ecology] because of his teaching style. He was a big thinker; he made us think outside the box, and always with the question, ‘How does this relate to the real world.'”

In Jonathan’s real world he hopes to raise awareness of the alarming disappearance of amphibians “by giving the issue a louder voice.”

To learn more about Jonathan’s work in Honduras, visit FrogRescue.com. Or view the center’s video on You Tube.