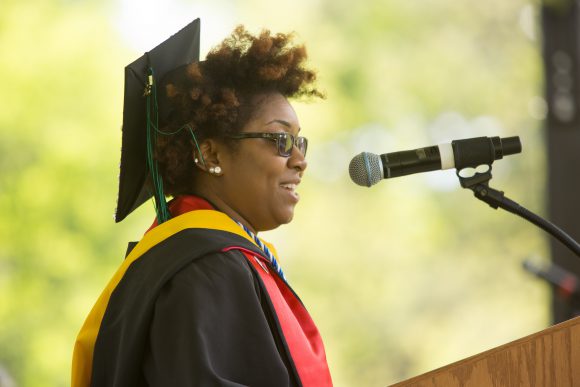 Taking the great leap from the cliff to the “ledge of tomorrow” is what Jessie Davis is all about and has been since she was in eighth grade. It was then that she knew she would be going to Rutgers, would be following a course of studies related to the medical field, and would be in control of her future. She calls it being “intentional,” taking life by the horns.

Early on Jessie demonstrated her commitment to acting on her belief in “intentional” living. She enrolled in Passaic County Technical Institute, a highly regarded high school in northern New Jersey, in its Academy of Medical Arts. While considering which college to attend, someone suggested that she look into public health as a field of study, which led her to Rutgers.

Jessie’s role at convocation was as the Class Representative, the graduating student chosen to inspire classmates, parents, family, friends, faculty and staff with a short send-off during convocation ceremonies. Her energetic remarks were met with cheers and applause as she created a new definition for “GPA.”

“Bear with me as we re-define GPA. In our reimagined world, GPA doesn’t stand for grade point average; it stands for genius, passion, and achievement.”

“Your genius is your ‘what.’ It’s what you’re good at. It is what you do better than anyone else. It is your exceptional creative power. You were born with it, it is your asset, and it will make room for you on the other side of the cliff.” 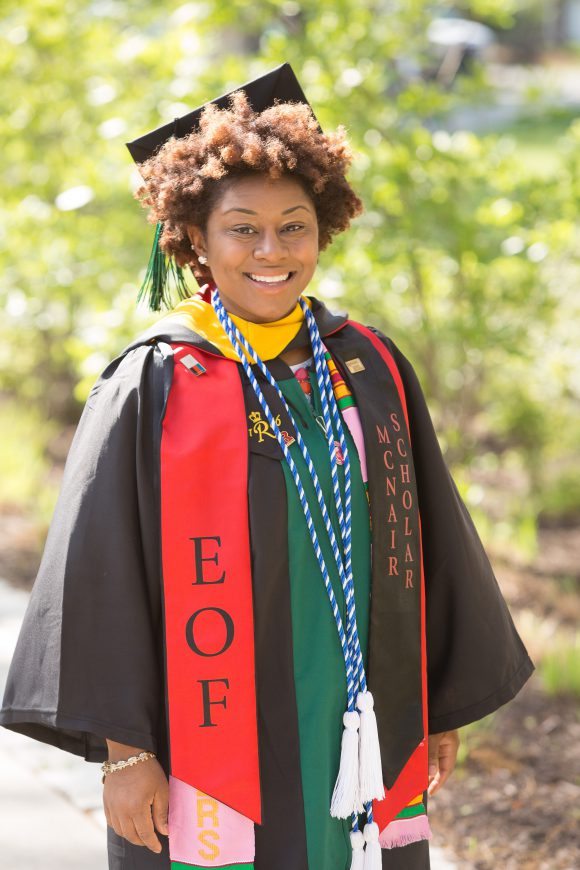 “Some of us stand here apprehensive because we don’t know what tomorrow holds. But if we never jump, we will never know what we are capable of achieving. So Rutgers’ School of Environmental and Biological Sciences’ Class of 2016, here goes nothing. 1…2…3 JUMP!”

Remarkably poised and confident, Jessie admits she wasn’t always that way. In spite of her strong childhood goals, she was anxious about going off to college. Growing up in urban Paterson, NJ, she was very close to her single-parent mother and was the first in her immediate and extended family to go to college.

It was then that she discovered the New Jersey Educational Opportunity Fund (EOF) program, a statewide initiative that provides support for financially disadvantaged students who are U.S. citizens, New Jersey residents, and who wish to pursue a college education.

Qualifying for the EOF program was a lifeline for Jessie. In addition to financial aid, it helped her “with the stress of adapting to college. It gave me the initial feeling of having a circle, pushing me to excel even when I had doubts.”

Jessie explains that for disadvantaged students the doubts stem from several sources. Many are the first in their families to take the leap to college. Also, it may be the first time they are away from home. And then there is what she calls “survivor’s guilt” – they are living a relatively comfortable life on campus while their family is still struggling at home.

She especially appreciated the mentoring of Jacqueline Moore, assistant director of special programs and EOF manager. “She took me under her wing and never let me go. She taught me that I had to advocate for myself because I was worth it.”

So influential was the EOF experience for Jessie that she is currently working for the office as a mentor, peer advisor and a teaching assistant for the Seminar in Academic Skills, which guides students through their first year at Rutgers to ensure that they make a smooth transition between high school and college. As she works, she also is preparing applications to graduate school to continue her studies in public health, focusing on health education.

Urban health issues are of particular interest to Jessie, who in the summer between her sophomore and junior year received a Ronald E. McNair Post-Baccalaureate Achievement grant to study the correlation between breast-feeding and postpartum depression in low-income African American women. Urban health and the role of physicians in health outcomes for African American women will continue to be her focus, she says.

The McNair Scholar program, funded at 151 institutions throughout the U.S. and Puerto Rico by the U.S. Department of Education, encourages doctoral studies by deserving, underrepresented students through involvement in research and other scholarly activities. Jessie’s success as a McNair Scholar, combined with a 3.7 in her major and a 3.3 overall (there’s that GPA thing again!), make her prospects for graduate school very good.

Is she worried? Not at all. “The leap you take from eighth grade to high school is like stepping over a crack. The leap from high school to college is akin to a five-block jump,” she says. Having very successfully cleared that hurdle, graduate school is definitely within her reach.