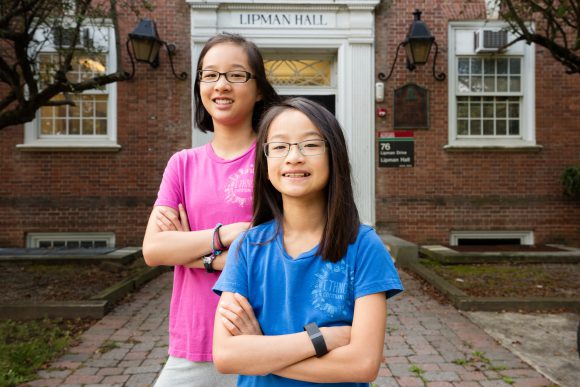 Ennyn and her 11-year-old sister Enna are studying green-fluorescent protein and other scientific concepts with William Ward, Department of Biochemistry and Microbiology.

The high, sweet voice of Ennyn Chiu sounds every bit like that of a 9-year-old girl, exuberant with a touch of singsong. But the words she uses, an extensive vocabulary combined with confident, well-reasoned discourse, would confuse any listener into thinking she is beyond her years.

It is this precocity and love of learning that led her to the Rutgers Summer Scholars program. This summer, Ennyn became the youngest Rutgers student ever by joining a three-week class called “Experimenting with Green Florescent Protein,” a biochemistry instructional program for gifted and talented pre-college and college students.

“At first I was nervous that I would not understand what was going on,” says Ennyn. “But as my first day progressed, I understood most of it. I like that fact that we are learning biochemistry at such an early age and that we can also have lots of fun while learning.”

Of the 145 students in Rutgers’ summer scholar classes in New Brunswick, the majority are high school juniors and seniors. Ennyn, along with her 11-year-old sister Enna, are both enrolled in the same class, making them youthful standouts among the teenagers in the room.

“The other students have been very receptive to the girls, very encouraging. I think they see them as little sisters.” says Yen-Yen Chiu, mother of the two scholars.  A math and English teacher, Chiu says the scientific concepts her daughters are studying this summer are “already over my head.”

Having relocated with her family to Highland Park from San Diego a year ago, Ennyn greatly enjoys her new grade school but confesses to finding it “a little boring” at times. Looking for a new challenge, she was intrigued by paperwork her sister brought home that described the summer program.

The family emailed William Ward, biochemistry professor at Rutgers and the instructor for the class, and he allowed the girls to separately try to answer an essay question to see if they would be able to handle the curriculum. Ennyn spent the next three hours thinking about the prompt and crafting her answer and was delighted when Ward accepted her into the program and gave instructions to learn more about Förster resonance energy transfer (FRET) and other concepts.

The summer program centers around green-fluorescent protein (GFP) – Ward’s life’s work as a research scientist for 41 years.  The west-coast jellyfish that contain this fluorescent protein are one of the most exciting teaching tools in biochemistry and molecular biology.  Cloning of GFP has enabled tracking of nerve cell proliferation, stem cell colonization, tissue regeneration, cancer metastasis and other processes central to biomedicine. In the course, Ward likes to combine traditional learning with hand-on exploration.

“A unique feature of this course is that we combine “hard” science with the arts in ways that few, if any, other instructional programs attempt.  We even have a talent show on the last day of class.  The gifted and talented youngsters are more than science whizzes. They are also artistically talented.  Several years ago, one of our talent show participants invited my wife and I to attend his piano concert at Carnegie Hall,” says Ward.

Ennyn finds the course interesting and challenging and spends about two hours every day outside of class on homework, learning or reviewing concepts and studying for the weekly quiz. She learns best visually so often asks someone to draw a diagram or picture to better understand a concept.

When she is not studying jellyfish, Ennyn enjoys participating on her swim team, drawing, playing outside and watching the change of seasons for the first time.  She would like to someday be an author, like the person who wrote her favorite book, Wonder. In that young adult novel, the main character has to convince his new classmates that he is like them, although he appears to be different. While Ennyn is not the same as her Summer Scholars classmates, she has found acceptance and the transition has been enjoyable and seamless.

“They are really nice to me and let me ask questions. Everyone in my group has helped to draw diagrams or illustrations for me. I definitely want to take another class next year, maybe a sports science,” she adds.