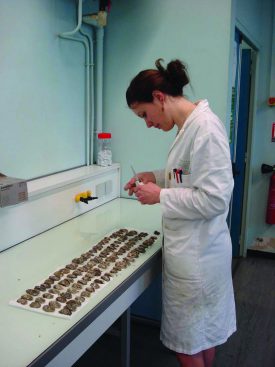 The Pacific oyster, which is native to Asia but transplanted to all continents except Antarctica, is the number one oyster species cultured globally. A close sister species of the native eastern oyster, Pacific oysters are cultured on the West Coast of the U.S., as well as France, and Australia. Since the early 1990s, they have been suffering from mass summer mortalities associated with an oyster herpesvirus that infects a variety of marine molluscs but not humans.

Just how the herpesvirus infects oysters and how oysters defend themselves against the disease are not well understood. Haskin Shellfish Research Laboratory (HSRL) scientists Ximing Guo and Susan Ford led an international team consisting of their French and Chinese counterparts to study these issues. The collaborative team used advanced DNA sequencing technologies to identify oyster genes expressed in response to virus infections. Their results indicate that although oysters do not have adaptive immunity or produce antibodies, they can mount a strong and complex antiviral response by activating a large and often novel set of genes, leading to the suppression of infections in some oysters. Variations in these genes that are linked to improved survival can likely be used to select for disease-resistant oysters. This will potentially boost oyster farming, considered one of the most important aquaculture industries in the U.S. and around the world.

The Atlantic sea scallop (Placopecten magellanicus), severely overfished in the early 1990s, has rebounded to become the most valuable fishery in the U.S. One possible contributor to the recent recovery is the system of rotational fishery closures that have enhanced scallop biomass within closed areas, possibly leading to elevated recruitment in other areas. HSRL scientist Daphne Munroe is leading current research that estimates and examines the links between increased scallop abundance and potential for young scallops being supplied to other areas using coupled larval biology and physical circulation models. Results of this research will provide better understanding of how rotating stock closures function and how they may directly impact sea scallop management. 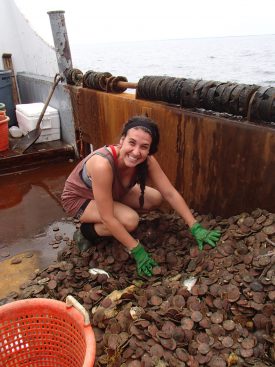 Shellfish technician Sarah Borsetti of the Haskin Shellfish Lab at Rutgers University sorts the catch during the 2014 federal scallop survey.
at Virginia Institute of Marine Science

Scallops are harvested using a dredge, which hauls only the large scallops up from the bottom to the surface to be sorted and cleaned on deck. Sometimes smaller scallops are damaged due to interaction with the dredge but because this all happens deep on the ocean bottom, accounting for this unseen component of fishing mortality—called incidental mortality—can prove difficult. The most recent surveys on incidental mortality are 25 years old and were conducted using now-outdated fishing gear.

Recognizing the importance of getting updated estimates of incidental mortality for stock assessment and sustainable management of the scallop population, HSRL scientists Eleanor Bochenek and Jason Morson are working with local scallop-fishing crews to conduct surveys using modern equipment.