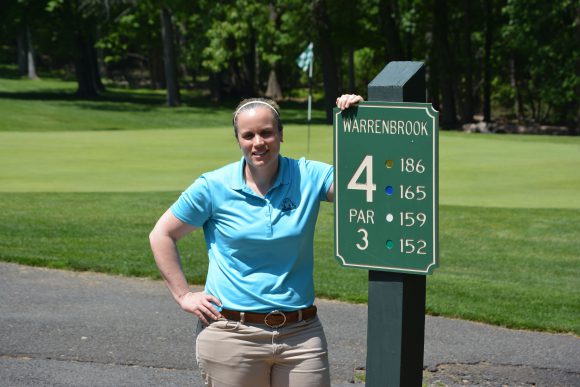 When Jo-Ann Eberle became head superintendent in 1984 at Sunset Valley Golf Course in Pequannock, she was a rarity—first female head super in New Jersey and the Northeastern United States.

For Eberle, it started out as a summer job at the nearby Playboy Resort and Country Club (now Great Gorge).

“I needed a summer job. I really liked working outside and getting my hands dirty and learning something new,” said Eberle, who grew up in Brooklyn before moving to Sussex County as a teenager.

After a few years, Playboy super Bruce Stickney suggested Eberle follow a career by becoming a full-time student at Rutgers University’s Cook College, which admitted only 32 students into the program yearly.

When Eberle first walked into the classroom in 1979, the fellow students thought she was looking for a landscaping class. They were wrong.

“They said there were no women in golf. Until I went to school, I didn’t realize there weren’t any women in golf. But, honestly, I never had a problem with the guys. They always treated me great. The only time I did was when I was a district director for GCSAA of New Jersey and wanted to hand out the lunch tickets. I couldn’t get into the men’s only grill room to give them out.”

The only other Cook College graduate in the field besides Eberle at that time was Barbara Cleary of the Cleary Chemical Company that produced fungicides.

By 1984, Eberle became the head superintendent at Sunset Valley and worked there until her retirement in 2009.

When she attended a national meeting of turf workers in California in the 1980s, she realized how few women were in the field. She only knew of two other women in the field, assistants Shirley Talmedge of Winged Foot and Patty Knaggs at Westchester.

“We put a sign in the ladies room that told any other females at the convention to meet us in the lobby at a certain time. We found out there were seven women at the meeting, two head supers, two assistants, one irrigation technician, one director of golf for a hotel management company and one other woman.

“As the years went on, I saw more and more women at the meetings. Now, every state has women working in turf. I’d like to think some people followed me. Rebecca Hawkins interned with me when she was a Rutgers student. I wasn’t grandstanding. I would just lead by example.

“A lot of different things come into play when you’re a super. I used to think 18 holes was a piece for cake. As a woman, you would think you would have to do above and beyond to succeed.”

Working at Sunset Valley, she understood just how much goes into being a head superintendent.

“There are a wide range of responsibilities you are accountable for. If you are not into that kind of a challenge, don’t get into the field. People can get discouraged. It’s a lot of work and you are not punching a clock.

“You live and breathe your golf course. It’s your baby. You give up a lot to have that. It’s something you love and it’s very gratifying when it all works out.”

Eberle remembered one of her first years on the job when a drought plagued the state. We had water restrictions that limited us to 10 minutes of water on the greens every other day. Because there was no rain, golfers continued to play.

“Everything went dormant, but we never lost a round of golf,” she said. “In public golf, resort golf, you have to be on your ‘A’ game all the time. Nobody wants to hear excuses.”

She thinks the popularity of golf, especially the Tiger Woods era, got more boys and girls interested in golf. Also, televised golf, local LPGA event in New Jersey, and golf becoming more family-oriented all helped change the mindset away from a male-dominated sport.

Today, 102 of the 17,500 members of the GCSAA are female, according to Craig Smith, GCSAA communications director. Just over half are head superintendents. And the trend of females is continuing. More than half have been GCSAA members for 10 years or less.

Nowadays, Eberle spends most of her time in Melbourne, Fla., where both her daughter and granddaughter reside. She returns to New Jersey in the summer to visit other family members, including her brother.

Rebecca Hawkins is a Jersey Girl all the way. Born in Elizabeth and raised in Scotch Plains, she attended County College of Morris for a two-year degree in business agronomy before matriculating to Rutgers’ Cook College, specializing in turf-grass management.

“My career began when a friend offered me a summer job that enabled me to work outside, work great hours and play golf on caddie day. I was hooked the first summer,” she said.

She had the good fortunate of working under Jo-Ann Eberle at Sunset Valley Golf Course in Pompton Plains.

“Miss Eberle was an excellent agronomist, leader and held the admiration and respect of her fellow superintendents in the greens industry. She not only encouraged me but has offered endless support and encouragement.

“I aspire to be a role model and mentor to the young men and women who are interested in pursuing a career in golf course management. I also wish to expand my experiences, enhance my personal development and increase my skills and knowledge in the golf industry.”

Also, fortunately, the profession has been kind in limited unnecessary hurdles along the way.

“I have not met any obstacles as a female superintendent. I have always been treated in a professional manner and with great respect,” Hawkins stated. “The golf course superintendent profession offers two things in particular that I treasure; being outdoors every day with wonderful people and the comradery we share.”

Diane Elwood, who grew up in Middletown, works close to her hometown at the Shark River Golf Course in Neptune after a long stint at the Bel-Aire Golf Course in Wall. She attended Delaware Valley College, majoring in OH Ornamental Horticulture and minoring in business administration.

“The college had an educational/employment program where you earned credit for working in your field of study. I love the outdoors and applied at a local golf course and got the job. Currently I have been working in the golf business for 35 years and plan to continue,” she said.

Elwood began her career at Bamm Hollow in 1981 as a seasonal greenkeeper, for her college education program and worked there for seven years. There, she met Matt Dobbie, who was the assistant superintendent.

“Matt encouraged me to pursue my interests in golf management. I learned a lot from Matt, he was constantly testing my knowledge by asking me questions and was a good teacher, introducing me to things even though it was very early in my college years.

“He showed me he really cared about the profession and that there was more than enough to keep me interested to keep learning. He was very serious but also had a good sense of humor,” she said.

By 1991, Elwood was assistant superintendent at Howell Park and has since moved around to various Monmouth County courses as head superintendent including Pine Brook, Shark River and Bel-Aire, where she currently works.

“I never saw anything as an obstacle, just a challenge, and there have been challenges.  On my first day, I was told by a fellow employee, ‘Women cannot meet the physical demands required on a golf course, and would get too emotional if they got dirty or broke a nail.’ ” 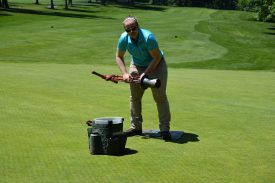 Tammy Stephens, the head super at Warrenbrook in Warren the past four years, thought she’d have a career working on infrastructure like roads and bridges as a civil engineer. But a summer job as a high school junior at her hometown High Bridge Hills Golf Club turned her head.

“I can honestly say, I got into it with no trepidation. Maybe I was naïve and didn’t know what I was getting into,” she said.

After graduating in agronomy and environmental science at Delaware Valley College, her first job was an assistant at New Jersey National. She then spent six years as an assistant under Darrell Marcinek at Neshanic Valley until coming to Warrenbrook in 2012.

“It’s hard for people to deal with a strong personality, let alone a woman in this field. People have insecurities and you try and learn from that. It hasn’t been an easy road and all roses,” Stephens said.

“Without mentors like Darrell my part of the journey would have been a lot rougher.

“I would like to let young ladies know there are other careers like this out there. My daughter is four and has the world at her fingertips. It doesn’t matter if you’re male or female: if you work hard in the trenches, people will notice,” Stephens surmised.

Jessica Hall has been an assistant superintendent at Rockaway River Country Club in Denville since 2007.

She has been around her chosen profession most of her adult life. Her father, Jeff, is currently the golf-course superintendent at Whitetail Resort in Mercersburg, Pa., where he has worked since 2000.  In 2001, Jessica began working under her father, who has put in 30 years in the profession, before enrolling at Penn State in 2003.

A year later, she received an internship at Baltusrol Golf Club and was promoted to assistant super in 2006 before taking her job at Rockaway River the next year.

“Honestly, I love working with turf and, of course, being outdoors. I chose to follow this career path. I’ve had guidance from my father throughout my journey and it has brought us extremely close,” Hall noted.

“It can be extremely challenging working in a male-dominated field.”

Torres of Makefield Highlands in Yardley, Pa., is a graduate of Rutgers’ Cook College turf grass program. Valerie Lawrence of Spring Brook is a native of Michigan.

Editor’s Note: This story originally appeared in the New Jersey State Golf Association Magazine and was written By Mike Moretti, director of Communications.