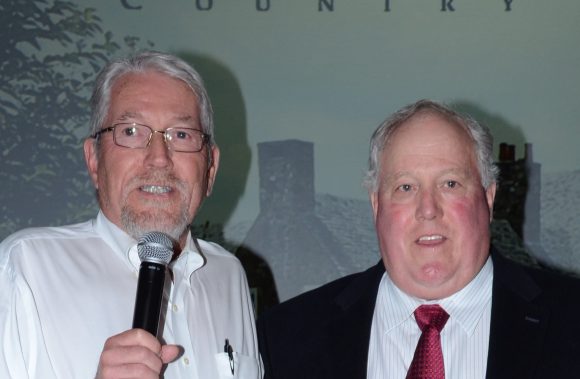 William Meyer, professor in the Department of Plant Biology and Pathology, has been named the first C. Reed Funk Endowed Faculty Scholar in Plant Biology and Genetics at Rutgers University. This is a tremendous honor for Meyer and the Rutgers Center for Turfgrass Science, which is celebrating its 25th anniversary. Executive Dean Bob Goodman presented the award to Meyer at the Rutgers Golf Classic Fundraiser at Fiddlers Elbow Country Club on May 2 in front of over 350 golf industry professionals from eight states and Canada. This is an annual event that has raised over $1.5 million for turfgrass research over the past 20 years.

Meyer joined the Center as director of the Turfgrass Breeding Program in 1996 after 21 years spent as a commercial turfgrass breeder and corporate president. He is widely recognized as one of the world’s leading breeders of cool-season turfgrasses. “Since coming to Rutgers in 1996, Bill Meyer has taken the Rutgers Turfgrass Breeding Program to a whole new level,” said Bruce B. Clarke, director of the Center for Turfgrass Science. “The turf breeding program was already recognized as the top program in the world during Reed Funk’s tenure, but Bill has really raised the bar in terms of developing new turfgrass cultivars with enhanced pest and stress tolerance that require less fertilizer and water.”

NJAES established the first turfgrass evaluation plots in 1923 and expanded its research and outreach efforts in the 50s. When pioneer C. Reed Funk joined the faculty in 1962, the program took a giant step forward. Funk was the first full-time cool-season turfgrass breeder at a university in the United States. He had a very productive career that spanned over four decades and was responsible for developing landmark cultivars of ryegrass, tall fescue, bluegrass and fine fescue. The breeding team led by Meyer and Stacy Bonos (GSNB’97) has continued to expand this world famous turfgrass breeding program. They travel the world in search of new sources of turfgrass germplasm. This has dramatically expanded the germplasm base for many of the cool-season turfgrass species that the Rutgers breeding program is famous for and is one of the reasons Meyer and his team have been so successful over the past 20 years.

“Dr. Meyer is richly deserving of the Endowed Scholar award. That this honor is named after his mentor and friend makes the award even more poignant,” said Chris Carson, golf course superintendent-Echo Lake Country Club and past president of the NJ Turfgrass Association. “I know that Bill was deeply moved when this was announced, and his many friends in the turf world are thrilled that he has received this recognition!”

Meyer’s past honors include the 2011 Breeder’s Cup Award-Turfgrass Breeder’s Association, the 2009 New Jersey Turfgrass Association’s Hall of Fame Award, and the 2009 Professor of the Year award from the Plant Biology Graduate Student Organization.