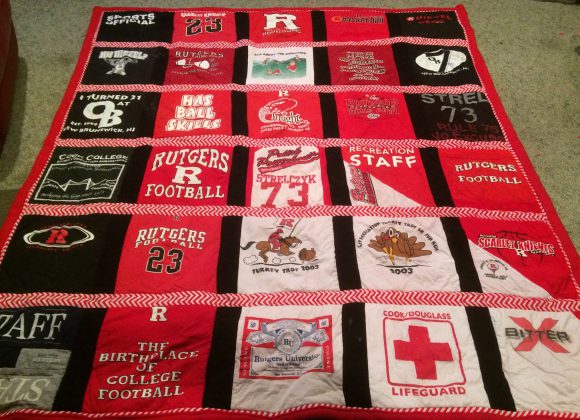 One of the byproducts of a college education is the collection of t-shirts that students invariably take with them after graduation. Diana Strelczyk was no exception.

It’s safe to say that many of those old college t-shirts ultimately end up, faded and torn, in the rag bag. But for Diana, these items brought back fond memories of her college experiences, and particularly her days as an active participant in the sports scene on campus.

After she graduated in 2006 with a major in sports management and a minor in environmental economics, she went on to Miami University of Ohio for her master’s degree, She took her t-shirt collection with her and added to the stack during graduate school.

Diana wanted to find a way to preserve the shirts and the memories they represented after she returned to New Jersey in 2011. Inspired by a roommate’s quilt made from sorority t-shirts, she decided to take a creative approach: a quilt of her personal Rutgers memories! 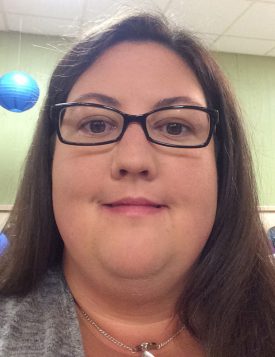 Believe it or not, there is a lot of how-to advice on the internet about quilt-making – even quilt-making from t-shirts. Diana says she knew what design she wanted. “The size would be six feet by eight feet, made from 48 blocks of individual shirts,” she recalls. “I even laid out a Rutgers block ‘R’ in the center of the quilt from some of my red t-shirts.”

Assembling and stitching the quilt was another matter. “So, of course, I turned to my mother, who is a talented seamstress. But even she found the task too overwhelming.” Deterred but undaunted, she set aside the plan for a while until she came to Stockton University in Galloway, NJ, where she works in the Office of Service Learning. There she found a colleague, Rona Whitehead, who agreed to help assemble the quilt.

In quilting, it actually does take a village to produce the finished product. In olden times, groups, primarily of women, would gather for “quilting bees.” These days the activity is called “bitch and stitch” sessions. Diana’s group, led by Rona Whitehead, had several of these sessions, adding up to 30 or 40 hours of work to finally complete the quilt this past fall.

“Almost all of the shirts are from Rutgers, with a few of my Miami of Ohio graduate school shirts sprinkled in,” Diana says. “All of these shirts carry a great story and remind me of my time ‘On the Banks’ fondly.

“Whether I was working at the Cook/Douglas Rec Center, attending football games, or volunteering at the Cook Leadership Breakfasts, I could always be found sporting my school spirit.” The quilt graces Diana’s bed, quite literally covering her in school spirit.