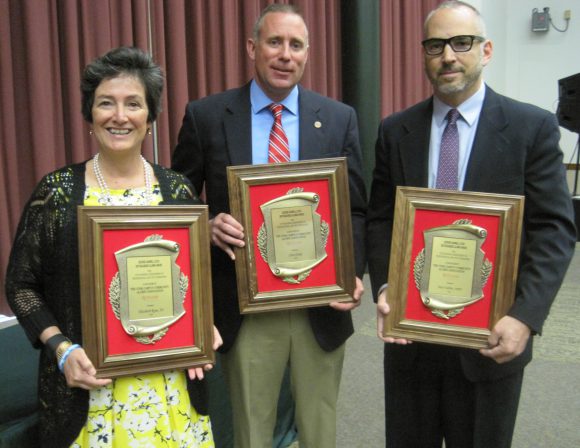 In an annual event hosted by the Cook Community Alumni Association, those with undergraduate degrees who were recognized include the following:

Christopher Dorko CC’94 – Chris is vice president and risk management resources officer with Berkeley Life Sciences in Ewing, NJ, and a professional firefighter in Summit, NJ. He also is an active volunteer in the Where Angels Play Foundation, building playgrounds in storm-ravaged communities as a result of Superstorm Sandy, as well as other locations.

After receiving his bachelor’s degree in environmental science, Chris went to work in the pharmaceutical industry, with responsibilities including site engineering, workplace safety, facility protection, loss prevention, and compliance. At Berkeley Life Sciences, he leads a team of highly sophisticated life sciences risk management professionals nationally who have specializations in such areas as industrial hygiene, infectious disease/biosafety, and fire protection. He has been a firefighter with the city of Summit for more than 15 years.

He was nominated for his alumni award by Heather O’Rourke CC’94, traffic reporter with WABC-TV Eyewitness News and a 2012 winner of the George Hammell Cook Distinguished Alumni Award. In accepting his award, Chris noted, “I can’t say enough about how much this school means to me and how much it helped me. It set me on my life sciences path, and I continue to be so proud of this school and what it contributes.”

Elizabeth Ryan CC’82 – Elizabeth Ryan was a political science major and a campus trailblazer who, according to those who knew her in her college days, was a natural born leader. She currently is president and CEO of the New Jersey Hospital Association of Princeton, NJ, a not-for-profit trade organization that advocates on behalf of the state’s hospitals and healthcare providers.

After receiving her J.D. from Seton Hall University School of Law in 1985, Elizabeth started her career practicing law in Mount Holly, NJ, and then went to work for the administration of Governor Jim Florio, followed by positions with healthcare organizations in New York. She has been a member of the New Jersey Board of Medical Examiners, the Clinton-Gore Transition Team, and the Clinton National Healthcare Task Force. She also served on the Corzine and McGreevey transition teams.

At the awards ceremony, she recalled that she “was from a small town and I felt a little overwhelmed by college. But I was made to feel at home on this campus, and to this day there is a nice camaraderie among Rutgers grads.”

Peter Tabbot CC’91 – Peter has stayed close to Rutgers since receiving his bachelor’s degree from Cook College and his MPH in 1997 from UMDNJ. He teaches several courses in the School of Environmental and Biological Sciences and the Edward J. Bloustein School of Planning and Public Policy, as well as serves as a faculty coordinator with the Office of Continuing Professional Education’s environment and public health course.

He currently is health officer for the Rockaway Township, NJ, Division of Health, where he supervises 13 fulltime-equivalent employees, oversees a budget of $1.1 million, and serves on various boards and committees. He has served as president of the New Jersey Environmental Health Association and the New Jersey Association of County and City Health Officials. He also was principal investigator and project director with the organization known as the Public Health Multi-State Learning Collaborative, funded by the National Network of Public Health Institutes.

He notes that he “was inspired to learn and teach by his mother and father and has had the good fortune to partner with excellent people in public health in the state of New Jersey.” 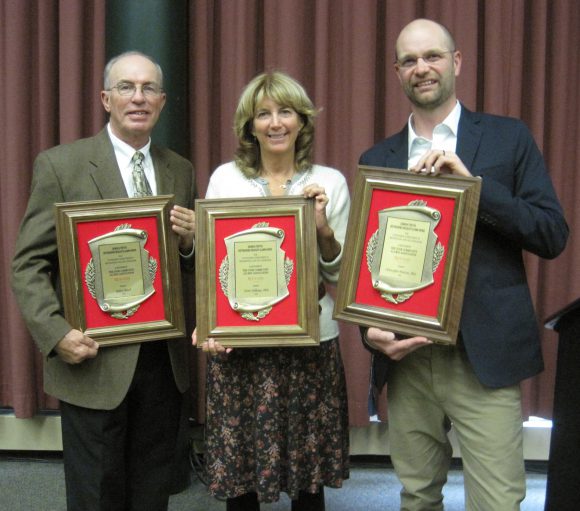 Of the three Dennis M. Fenton award winners, one is an “ag” graduate, one was an early Cook graduate, and the third earned his graduate degree in 2001. They are profiled here:

Robert H. Bruch Ag’69, GSNB’77 – is technically retired, but hardly sitting back and relaxing. A full time Christmas tree farmer in south Jersey, he is affiliated with Rutgers Cooperative Extension’s Department of Agricultural and Resources Management Agents with an address in Martin Hall.

After receiving his undergraduate degree and serving in the Army, Bob came back to New Jersey and went to work for the New Jersey Department of Agriculture. He earned his master’s degree in agricultural economics and marketing in 1977 and enjoyed a 38-year career in economic development with the Department of Agriculture. He continues to work with Rutgers Cooperative Extension of Salem County on crop insurance education and is on retainer with the New Jersey Farm Bureau. He is a director of the New Jersey Christmas Tree Growers Association, and he serves his community as a volunteer firefighter and a fire commissioner.

Look for a profile on Bob in the spring 2016 issue of Explorations, the school’s magazine for alumni, donors, and friends, where he notes that his ag econ education wasn’t about economic theory, rather it was about problem-solving.

Terrie M. Williams GSNB’79, ’81 – As the first Ph.D. student of Tim Casey, professor in the Department of Ecology, Evolution, and Natural Resources, Terrie recalls that “Tim Casey encouraged me to run wild with my imagination” and provided the inspiration for her academic and career path. She is a comparative ecophysiologist at the University of California-Santa Cruz and director of the Center for Marine Mammal Research and Conservation there. For the past 30 years her research has investigated mammalian predators and how they are able to survive in a constantly changing world.

She was named one of the top 50 women in science by Discover Magazine and has a USGS Antarctic Site Designation (Terrie Bluff on Ross Island) in honor of her years of polar research on Weddell seals. She is one of the most highly cited scientists in Science and Nature, and she has written award-winning books for the general public about her research expeditions and work with endangered species.

At the awards ceremony, she described an experience when – “let your imagination run wild” – she planted her face into the mane of a sedated African lion during a research expedition “to experience the feel and the smell of this magnificent creature.”

Christopher T. Martine CC’96, GSNB’01 – Chris is the David Burpee Chair in Plant Genetics and Research at Bucknell University and director of the Manning Herbarium there. He received his bachelor of science degree in natural resource management and his master’s degree in ecology from Rutgers, then went on to the University of Connecticut to earn his Ph.D.

He is a biodiversity scientist with a focus on plants, especially the ecology and evolution of plant reproduction. His work takes him frequently to Australia, and he also concentrates on biodiversity in the Northeast U.S. He believes that one key to stemming biodiversity loss is producing materials that engage the public interest in plant science. He produces a web-based program “Plants Are Cool, Too!” and last year came back to the Cook campus to film two new segments for the show.

A student of professor emeritus Roger Locandro during his Rutgers days, he noted at the awards event: “I credit Doc Locandro and this university for what I am today. They didn’t prescribe my direction, but rather they allowed me to find it.”