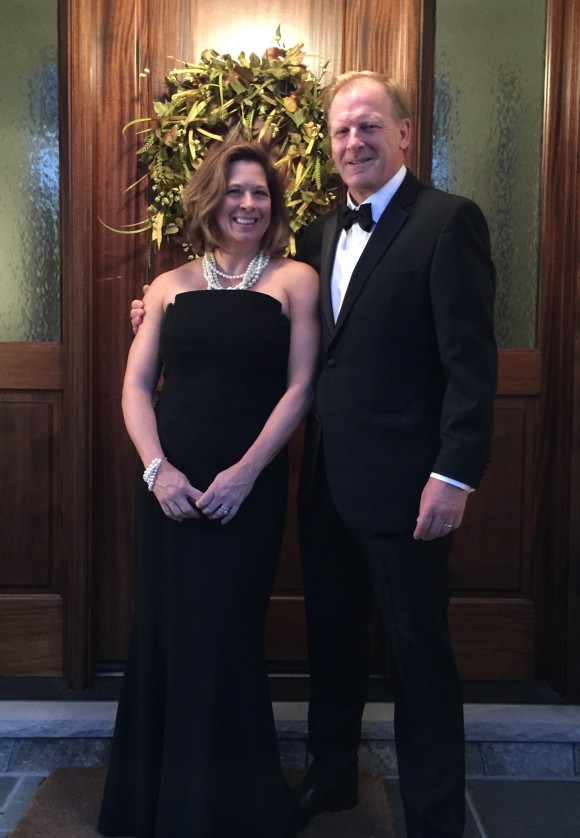 Donors who support scholarships for higher education consistently designate their gifts for second-year students and above, subscribing to the theory that these students have demonstrated an academic track record that makes them deserving of scholarship support.

In the case of Ken Possenriede (CC’82) and his wife Jennifer (DC’83), however, their longtime and generous scholarship assistance is deliberately focused on incoming, first-year students as an incentive to excellence.

The Kenneth and Jennifer Possenriede Recruitment Scholarship for students in the School of Environmental and Biological Sciences is designed “to open doors for the best and brightest students” to the kind of rigorous academic program offered by the School, says Ken Possenriede.

An intensely loyal alumnus, Ken envisions Rutgers University being recognized as a “public ivy”— in the same category as the University of Michigan. He knows both institutions well, having received his bachelor’s degree in business economics from Rutgers and his MBA from Michigan.

He follows both schools and the Big Ten, in both academics and sports, and sees Rutgers as a contender in the Big Ten in both areas. “Rutgers has its act together now and should be there,” he says.

Ken would like to see Rutgers become the top school of choice for even more academically excellent high school students and believes that this scholarship for incoming first-year students is an attractive incentive. In addition, the scholarship is eligible for renewal and also is open to upperclassmen.

Ken’s motivation in part stems from his own experience as an undergrad. When he was at Carteret High School, he applied to and was accepted at Cook College and Rutgers College. He gravitated to Cook because of the Ag Econ department (now the Department of Agricultural, Food and Resource Economics) and its major in business economics. Another deciding factor was the size of the school (“a small-school atmosphere in a large university”) and the academically serious classmates, many of whom were in sports programs and lived on the Cook Campus.

Ken admits that he had always been more interested in sports—football and cross-country—than studying, but his parents were adamant that he and his sister attend college. His dad worked for PSE&G for 46 years, and his mother worked on and off. Both parents, he said, scrimped and saved to cover the cost of their children’s tuition. Proudly, Ken was the first in his immediate family to go to college.

When he arrived on the Cook Campus, he signed up for intramural sports, but he quickly realized there was much more to experience. He joined Alpha Zeta honor and service fraternity, which “forced me to get involved with the Cook community and put me in touch with a diverse group of individuals who helped me to progress. And I came to realize that diversity is very important to education.”

Ken recalls that the late Professor Al Meredith, who taught agricultural economics and marketing, was a major influence in Ken’s progress. Part of the connection was sports; Meredith had been a varsity lacrosse player. But the other part was Meredith’s insistence that Ken challenge himself. So Ken applied for the G.H. Cook Honors Program and was accepted. His research focused on the frozen concentrated orange juice futures market “because of my interest in exchange markets, commodities and regression analysis. It was a great experience because you spend two semesters doing research, you write a thesis and then you defend your program with a presentation followed by a Q&A from the faculty. It was excellent preparation for graduate school and a career,” he says.

He also appreciated the mentorship of Daymon Thatch, emeritus professor and former chair of the Department of Agricultural Economics and Marketing, and the legendary teaching of the late Professor Roy DeBoer of the Department of Landscape Architecture who taught Environmental Design and Analysis to virtually all of the school’s newly-minted freshman.

It so happens that a Douglass College student, Jennifer Cooper, also took DeBoer’s class. Eventually, Ken and Jennifer met officially through mutual friends at the Cook-Douglass Pub (“yes, there actually was a pub on campus in those days”) and became Mr. and Mrs. Possenriede. After earning his MBA at Michigan, Ken moved to Ithaca, N.Y., to work for IBM, and Jennifer worked for Cornell University.

Soon daughter Emily and son Alex came along, and Ken went to work for Lockheed Martin, where he currently serves as vice president–finance and business operations for Lockheed Martin Aeronautics Company in Fort Worth, Tex. Emily graduated from Smith College, and Alex from Boston University. Both are pursuing successful careers in Manhattan.

What is Ken’s takeaway on his time at Rutgers, and why are he and Jennifer so loyal? “For me, the lightbulb went on in college. My Rutgers education was the bedrock for all that followed. The school challenged me and made me want to be a good student. I discovered that if you follow the steps—if you do this, this and this—it will make you successful,” he says.

And by the way, while he and Jennifer are now living in Fort Worth, you are sure to see them on campus at a football game or down the shore at their home on Long Beach Island. New Jersey and Rutgers are never far away in their lives and loyalties.